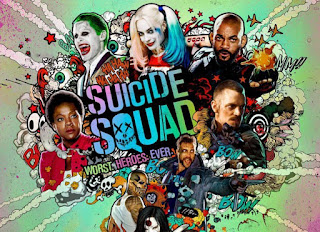 The folks at Warner/DC must know that there's a lot riding on this one. After the critical mauling that greeted “Batman V Superman” they need a film that comic fans can get behind. The success of “Deadpool” showed that audiences can handle heroes that aren't exactly heroes, so what better than a whole screen full of murderers and fruit loops? “Suicide Squad” was always going to be a film that needed a firm hand to balance the outlandish characters and even make the audience like them, despite their crimes. That hand has been provided by David Ayer, the man behind such gems as “Training Day”, “Fury” and, um, “S.W.A.T”. 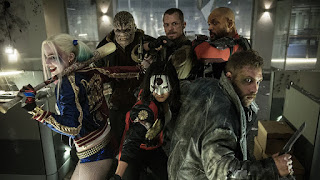 There has been some criticism about the plot, which is your usual 'big bad nasty thing wants to kill everyone' kind of thing, although with what I felt was a quite neat set up. This doesn't really bother me as what I'm really interested in is the members of the titular squad. The main characters are all introduced at the beginning of the movie, as government cold hearted bitch Amanda Waller lays down her plans for an expendable task force. It's a simple way of getting people up to speed, and it works. When shit hits the fan very soon afterwards, it's time to go to work. 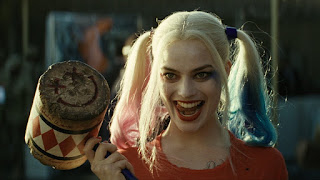 So it's time to look at who we've got, and it's certainly a mixed bag. Bottom on the pile is Jai Courtney's Captain Boomerang, who doesn't have much to do just comes across as a nob. This is the only character, however, who should have been written out before filming. Top of the pile, unsurprisingly, is Margot Robbie as Harley Quinn. Another alumni of the “Neighbours” hot actress machine, she absolutely nails the character, helped by a spot on script. Harley is the heart and soul of the film, the tornado of insanity that draws everyone in. A close second is Will Smith as Deadshot, perhaps the most well rounded character and the one given the most opportunities for an actual personality. Smith does his usual job of playing Will Smith, but he suits the movie so what the heck. 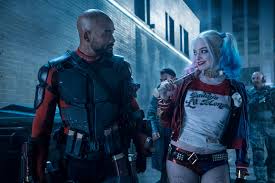 Another side of the coin is Jay Hernandez as a heavily tattooed Diablo. The script makes the pyrotrechnic genuinely remoreseful for his crimes, and gives the character a real depth. Elsewhere, Adewale Akinnuove-Agbaje is buried under make up as Killer Croc, and doesn't really get to show much of what he can do, whilst Joel Kinnaman does his best with soldier hero Rick Flag, a decidedly two dimensional character. Much more interesting is Karen Fukuhara's Katana, given just enough back story to elevate her from “Slashy ninja” status. Jarde Leto's Joker has, naturally, got the lion's share of publicity, which is odd because he isn't in the film that much. When he is he seems to be trying too hard, and the Joker is more of a cheap 1930's gangster than a powerful insane crime boss. 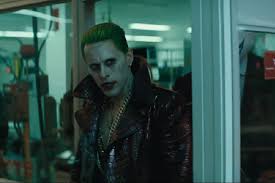 So I'm not going to spoil anything here, suffice to say that “Suicide Squad” overcomes a basic plot structure to emerge victorious, thanks to some spot on characterisation, decent acting and a script that actually has plenty of laughs in it as well as violence and baseball bats. Margot Robbie will set a fair few teenage loins throbbing, and I really hope her and Leto are allowed to turn things up a notch for the next Batman movie. There are quite a few sly nods to the source material that fans will delight in (The John Ostrander building, anyone?), and by the end you'll be rooting for a bunch of murdering thugs. Well, except Captain Boomerang, anyway.