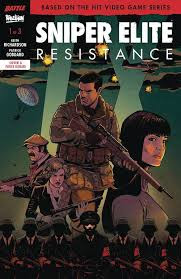 Following the interesting yet confusing 'The Vigilant' publisher Rebellion delves into another of their intellectual properties, this time from the worldof video games, where Sniper Elite is into it's fourth game as I write. Personally, I haven't played any, but bad games don't tend to get four incarnations so it must be pretty good, I suppose.

The fomat, like The Vigilant, is in the U.S comic style, though with fewer pages and a lower price tag of £2.99. Oddly, there is no price anywhere on the cover, and I hope whoever is responsible got a swift kick up the arse. The script, by 2000AD griup editor Keith Richardson does it's job pretty solidly, intrpducing us to Karl Fairburne, who is parachuted into France to help fight those dastardly Jerry's what? In the course of this, the first issue of three, he meets up with the resistance, encounters the enemy and still has time to give us some personal history in a flashback. It's good stuff, and ably brought to life by artist Patrick Goddard. It's not a children's comic, and no punches are pulled, with Rebellion doing their best to make the U.S comic section in WH Smiths a veritable minefield for parents of young children. Mind you, kids these days will probably love a german taking a piss and getting his thriat cut - I know I'd have enjoyed in the the Seventies.

A good read throughout, I'm looking forward to the nest two issues. Fans of Garth Ennis' War Stories and the like should certainly pick this up. Don't let the fact it's a video game tie in put you off, Sniper Elite pulls no punches.
Posted by Alski at 03:12 No comments: 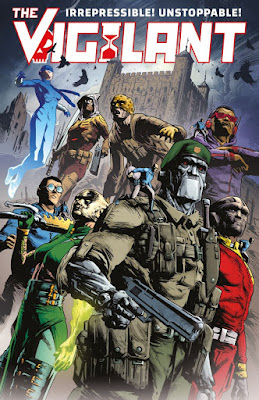 Well, this was an unexpected move from Rebellion, publishers of 2000AD and curators of the Treasury Of British Comics. Some bright spark realized that they now have ownership of tons of classic British comic characters and had the idea to create a sort of super team from them. Let's be fair, it's a great idea and full marks for giving it a go. You probably won't find this with 2000AD, though, as it's in the smaller format normally reserved over here for Marvel and DC  reprints (on the High St, anyway), so if you want it make sure you check there as well. 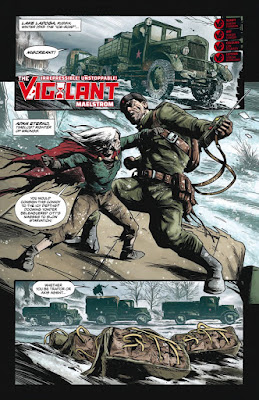 The smaller format makes for a very attractive product here, and The Vigilant looks excellent, with thick, glossy paper filled with beautiful art and colouring. The main strip takes up half of the comic and introduces us to the nine main characters. the first thing you notice is the lovely art from Simon Coleby (Judge Dredd, the Authority etc), really helped by Len O'Grady's colour. The images leap off the page and are easily the best thing about the publication. The story, by fellow Brit Simon Furman (Transformers, Dragon's Claws and much more) is not so great. This isn't a quick read, as it's quite complex and mystical, and those who try and skim through will just end up confused. I read through a second time and tried my best to follow everything but still ended up a bit baffled, although I was entertained nonetheless. There has been criticism that there's too many characters, and this is certainly valid - the whole thing would have worked just as well if you cut three or four of them. In the end, I enjoyed reading the main strip, and would like to see more, but it needs to be made more accessible to all ages, especially given it's placement in the racks. 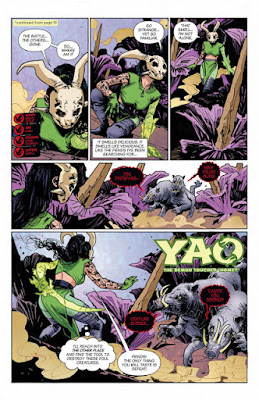 The second half of the mag is filled with three strips concerning individual team members. The writers and artists are different to the main story, but everyone does a great job. New character Yao and 70s stuntman stalwart Blake Edmonds (Death Wish) have tales that take place within the main story, as they have been temporarily sucked through a dimension hole. I had to comb my way back through the main story to see where this happened because it's not remotely clear. Anyway, the strips are both pretty cool,l with Tao getting an origin and Edmonds in a parallel universe. The final strip features the Steel Commando and fills in his background for those unaware of what the frack he actually is. It's the best of the three and has a lot of heart to it, as well as a cameo by The Young Ones. these short, self contained strips add plenty of value to the title, and I look forward to more in future issues, dealing with different characters. 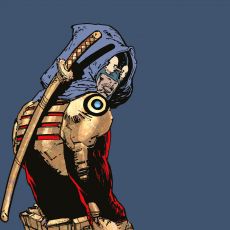 Overall, The Vigilant can certainly be considered a success by all concerned. Whilst the main story needs to be simplified a bit and be made a LOT clearer as to what is going on, it still works and retains a wonderful Britishness missing in the plethora of U.S reprint titles. The best thing is to go out and try it for yourselves, supporting a new British comic and having some fun in the process. 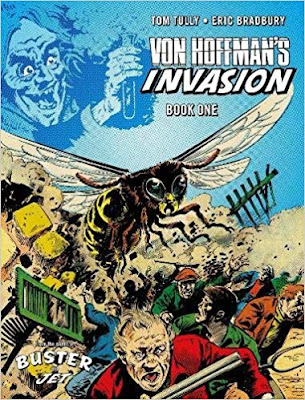 Blimey! Publisher's Rebellion are certainly pulling out the nostalgia stops with this one, originally published in Jet (and Buster after readers got 'great news') from1971. Although there are many strips from this era that are mature, interesting and intelligent, Von Hoffman's Invasion can charitably be described as a 'yarn' at best.


The plot, such as it is, concerns Nazi scientist Von Hoffman, who may as well shout 'Bwah ha haaa!' every time he appears, so evil is he. After being locked up at the end of the war for being anasty Nazi, he finally gets out and swears revenge on the Allies, specifically England. he is armed with a spray that not only enlarges any animal but also allows him to control them so they do his every bidding (Bwah ha haaa!). The only problem is that the effect is unpredciatably temporary. You'd think another problem would be that he'd run out of the spray, but this never happens, no matter how may giant spiders/dogs/beetlees etc he makes. this endless loop of him making giant things, causing havoc and escaping is repeated over and over again with scant character development or forward plot movement, with only the introduction of some meddling kids (who no one believes, natch) giving any real pause for thought. 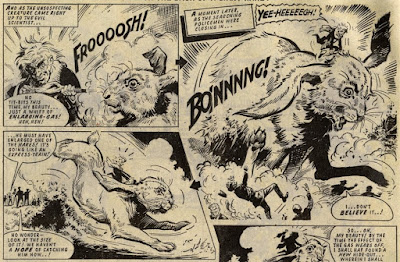 Although written by weekly comics legend Tom Tully, Von Hoffman's Invasion is bloody awful. The mad German for some reason calls a Woodlouse a 'Cheese Roller', even though it's strictly a colloquial UK phrase, and tries to stop England winning the 'Global Cup' at football later on. His accented speech gets irritating, and if I wasn't going to review it I probably wouldn't have bothered finishing it. The saving grace is artist Eric Bradbury, who delivers quality visuals that don't lack for accuracy in the animal department. 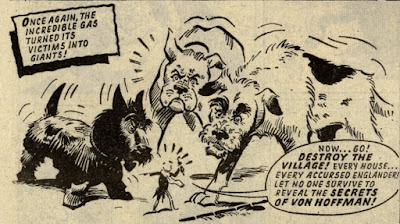 Von Hoffman's Invasion is not fun enough to be a comedy and too silly to be a drama, ending up all alone in the middle with no mates. Repetetive, daft and dull, this is the first time Rebellion's British Treasury of Comics has come up wanting. This is one treasure trove that should have been left buried.