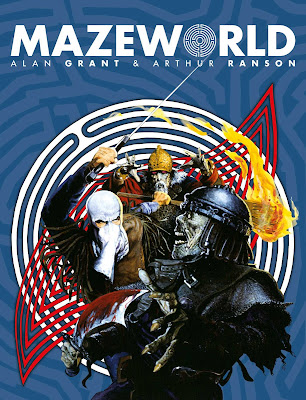 Between 1996 and 1999 readers of 2000AD were treated to this unusual tale from the mind of Alan Grant and the pen Arthur Ranson, previously respected collaborators on Judge Anderson stories. Ranson's realistic depictions had garnered him plenty of well deserved praise, and this creator owned series was the next step in a successful collaboration. 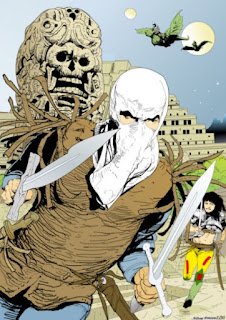 At the time, I remember not being too excited over Mazeworld, as although the art was superb the story seemed quite leaden, perhaps not suited to being read weekly. This is the first chance I've had to read all three series at my own pace, and I'm happy to say it has improved with age for me. The story concerns Adam Cadman, the last man to be hanged in Britain in 1964 (not a real person, though). Cadman's hanging goes wrong, and whilst his physical body goes into a coma his spiritual self is transported to a medieval type land called Mazeworld. The hood he was wearing is now firmly attached to him and he is greeted as the fabled "Hooded Man", sent to free the peasants from tyranny. Over the three series Cadman finally comes to accept that Mazeworld may be more than a coma dream, and has to fight for his life and our own reality. 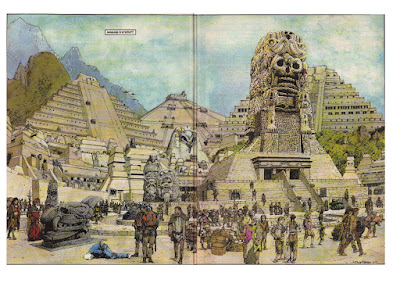 Mazeworld is a very good story that keeps readers guessing as to what the whole point of it all is before rounding off the final series quite satisfactorily as all finally becomes clear. There's plenty of magic involved and Mazeworld itself is a well realized fantasy world with supporting characters that have well drawn out personalities. It's a given that Arthur Ranson makes it all come alive, and as I'm a fan of his art style I delighted in the beautiful full colour pages. 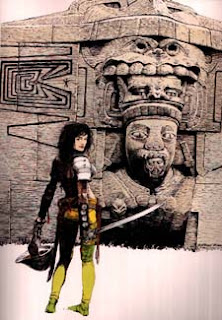 If you've never read this one then you're certainly in for a treat with this volume. Lovers of quality fantasy will have a ball, as will fans of original, smart comic books. It's not a stone cold classic, but Mazeworld is one of those books that will make you appreciate how much a bit of hard work can elevate a comic story. Full marks to Grant and Ransom, this one has stood the test of time extremely well. 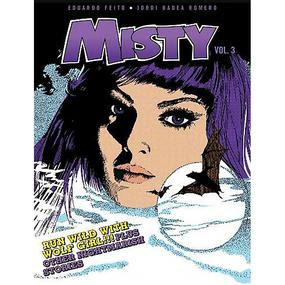 And so the Treasury Of British Comics rolls out another volume from the much missed girls' comic Misty, and whilst previous stories have featured a variety of well known creators this time it's all a bit of a mystery. Whilst Spanish artist Eduardo Feito was a veteran of UK girls' comics, the identity of the writer has been lost to the mists of time. In an era where the likes of 2000AD were happily slapping creator credits on stories, it's unusual that a major serial such as 'Wolf Girl' lies unclaimed, (and not in an Alan Smithee sort of way), because it's a pretty good tale. 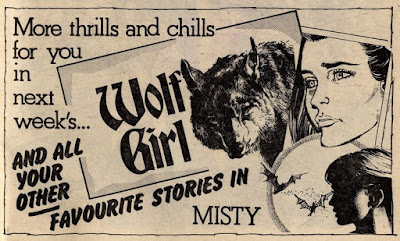 The story is set impressively fast, and in the first couple of segments we see baby Lona orphaned by a car crash, after which a wolf raises her for 2 years before she is found and returned to civilisation. Cut to a decade or so later, and Lona is behaving rather oddly - some would say feral. Unusually for a girls' comic character she hasn't got evil parents, but instead her personal peril comes from the fact she is unaware (initially) of her wolfy heritage. Cue howling at the moon, snarling at bullies and being able to communicate with wolves. Lona then goes on a voyage of self discovery that takes her from the suburbs to the forest. 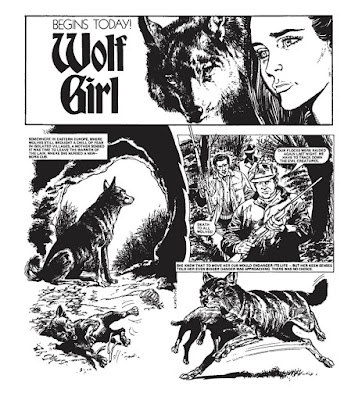 As a story, Wolf Girl is a lot of fun, if rather silly when you actually think about it too much. Feito does a good job on both humans and lupines, with his art being pretty stadard for the time. Fashion of the times is apparent with tank tops and mutton chops, and at one point Lona is menaced by what looks like Leo Sayer and John Craven. It's quite a short strip, coming in at just over 60 pages, so the rest of this volume is made up of one off stories - all wolf related. These four stories are all from unknown authors (making the whole book a mystery), and are all well worth a read if you enjoy Twilight Zone-esque horror tropes.

Overall, 'Misty Volume 3: Wolf Girl' is a decent read. The main story isn't supernatural in theme, but the extra material makes up for that in spades. Whilst nothing to howl from the rooftops about, Wolf Girl is nonetheless a perfectly enjoyable slice of comic fantasy.