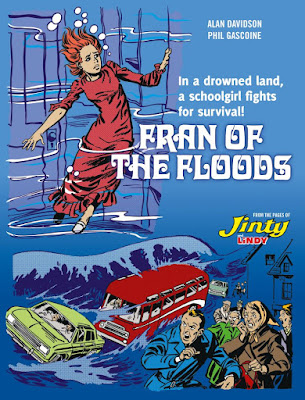 It's time to delve into the Treasury Of British Comics again, as publishers Rebellion trawl British girls' comics of the 1970s to unearth hidden gems that only our big sisters will remember. Appearing in the disarmingly named Jinty throughout the most of 1976, Fran Of the Floods manages to warn people about the dangers of global warming before it was even a thing. Thank writer Alan Davidson ('Little Miss Nothing', 'The Valley Of Shining Mist') for that. 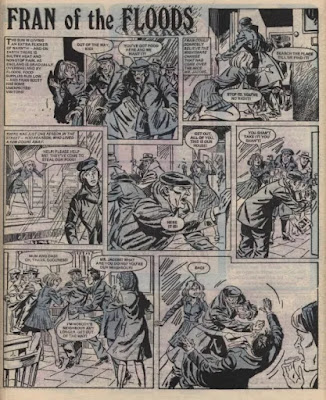 The floods in question aren't just a case of people canoeing down the high street for a few days. Fran lives in Hazelford, not taking much notice of the dire warnings of excess rain coming from further down south. Instead of preparing for a national emergency life goes on as normal, with a school concert and squabbles with her sister, until the rains come and refuse to go away. Even though they are on relatively high ground, Hazelford is soon submerged, and Fran is separated from her family, trying to survive as best she can. 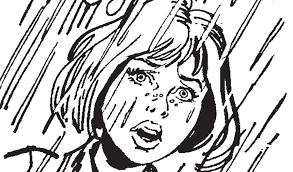 She sets out on a quest to get to Scotland, where she hopes to find both her family and higher ground, and it's this quest that provides the bulk of the story as she runs into groups of survivors both good and bad and is reunited with a school friend, Jill, bringing conversation and shared peril into the narrative. Phil Gascoine brings the scripts to life very well, with a style that is pretty standard for the time but nonetheless clear and highly readable. 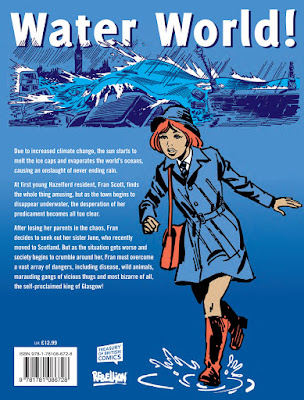 'Fran Of The Floods' has it's flaws, like the world's stupidest doctor, but it's a surprisingly robust series with a sound basis for the frak weather that has stood the test of time. It's neither a girls or boys strip in the end, just a story that happens to have a girl as the main protagonist. A fascinating piece of comics history that has certainly earned it's right to be reproduced today. 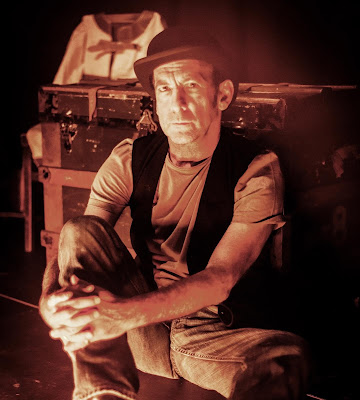 Paul Zenon is a magician. No, scratch that, because it's not that simple. True, he may have started as a magician, all those years ago in Blackpool, but he's won awards for comedy as well as magic, is a prominent skeptic and bullshit detector, an actor, and also appears on Countdown to liven up Dictionary Corner. So, yeah, Paul Zenon is a magician, but like in all the best tricks things are not always just what they seem.

"Linking Rings" is not a magic show, rather it's a show about magic. It's ostensibly a tale of two people. The first is Jim Collins, Harry Houdini's right hand man and the one responsible for many of the sneaky tricks that allowed the great man to perform what would have seemed like miracles. The other is Zenon himlself, a boy who wandered into a Blackpool magic shop in the early 1970s and, in a way, never left. There's the odd bit of unshowy magic here, (notably in the way Zenon always seems to find a ready supply of alcohol), and of course the titular linking rings make an appearance, but it's really just a man on a stage telling a compelling story of his life and that of a man who's talent was not to be noticed as much as possible.

I'll be honest, I didn't expect this to be so moving, as Zenon lays his history bare with style and no small amount of humour. Collins' story is fascinating, and new to me, but The Adventures Of A Young Magician In Blackpool manages to be the better tale, probably because it's so personal and not gained from books and photographs. Zenon takes everything slowly and clearly, surrounded by appropriate props from the eras he talks about. Lighting and effects are used sparingly and very effectively to compliment the narrative, and I get the feeling this must have been a cracking show to see in the flesh, like experiencing a sixty minute time warp before returning to the unmagical world outside.

"Linking Rings" is a unique and very entertaining DVD, a compelling snapshot into Paul Zenon's early life and that of a man who has fascinated him for many years. Magic? Not really. Magical? Absolutely! 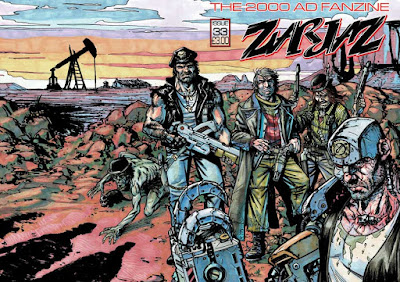 Borag Thungg, readers. Once again it's time to take a look at the longest running and best 2000AD based fanzine, the mighty one itself - Zarjaz. Made from blood, sweat, tears and a crazed devotion to the source material, Zarjaz has rarely failed to impress and it's no surprise that it has been a springboard for future talent through the years. 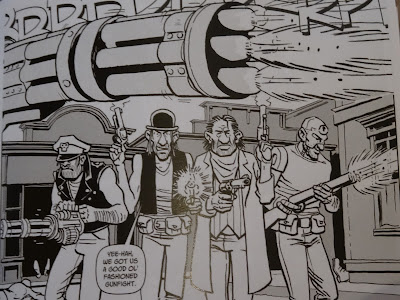 As ever, the excellent cover is provided by a 2000AD regular, in this case Patrick Goddard (Savage), with colours by Steven Denton. It features a suitably scabby Angel Gang, and it's these low down varmints that kick off the issue inside with a tale that sees Pa Angel find gold on their farmland. Naturally, other people want the oil, but it isn't smart to try and get the Angel gang to give up anything, let alone a load of 'black gold'. It's a solid tale from Alec Robertson, with slightly cartoony art from David Parsons. Overall it's a decent read and it starts off the issue well. 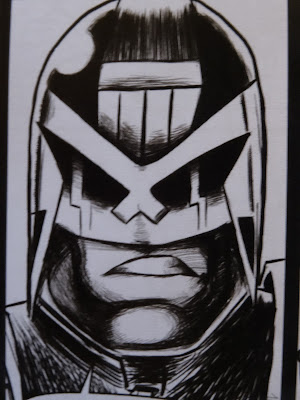 A very quick trip to Maga City One comes next, with the daft single page story "Leading the Blind" by Alan Holloway. Taking us back to the days where the purpose of a Dredd strip was a bad pun in the final panel, this does it's job well, aided and abetted by some really nice art from Dan Goodfellow. 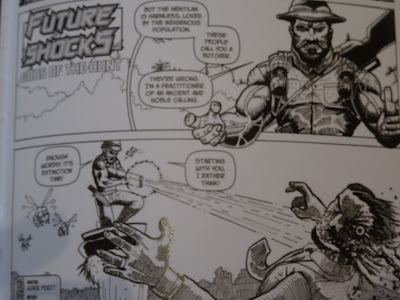 George Pickett is next, giving us the Future Shock "Gods Of The Hunt". It's a very smart story about hunting species to extinction, revenge and deception that has a twist that genuinely works. Sam Weller provides decent art that has some nice touches, and this is one of those stories that would not be at all out of place in 2000AD itself. 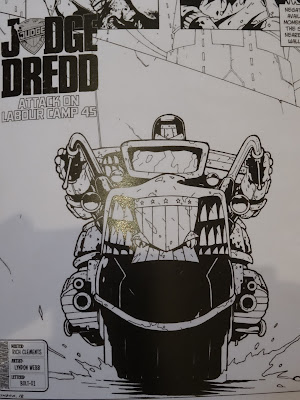 We return to Mega City One next for a proper Dredd strip featuring a rare foray into strip art by popular artist Lyndon Webb. He manages to breathe life into Rich Clements script for "Attack On Labour Camp 45" concerning Dredd's visit to a Cursed Earth labour camp that's gone dark. The story itself doesn't really give too much in the way of narrative but has some nice lines (including a great final panel) and plenty of action. Oh, and there's dinosaurs, so yay for that! 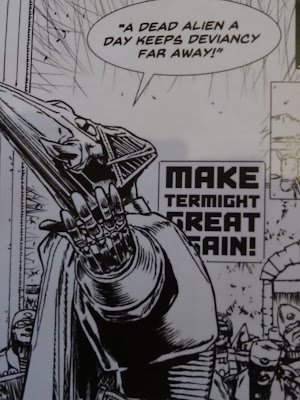 Getting something new out of Pat Mill's Nemesis The Warlock is Santiago Mayaud, who delivers a first class script that sees a Termight cosplay competition end in disaster. Amusing and exciting, with decent art from Adrian Bamforth, it's a definite high point here, featuring the debut of the strip's title character: "Trashquemada". 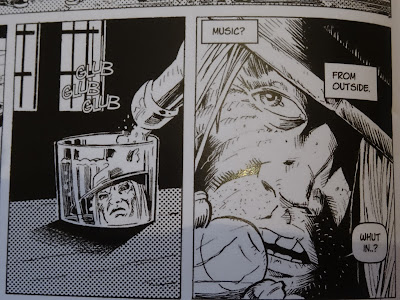 Next is "Death Takes A Holiday", coming under the "Tales Of Necropolis" banner. Judge Death has taken some time off in the radlands, and is interrupted by a preacher. Robomonkey47 handles script and art duties admirably, although the pay off isn't totally clear, to me anyway. It certainly feels like he's setting up three characters that come in late as a future strip, but their jumping to a conclusion with no evidence seems off. 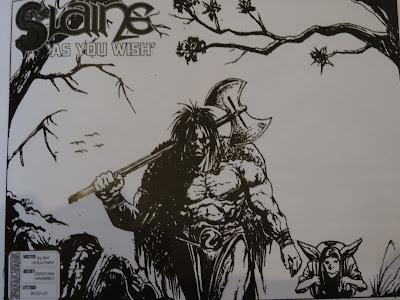 A rare character in the magazine is Slaine, and it's nice to see him so well envisioned by artist Christian Navarro in the light tale "As You Wish". The art is dark and a little gritty, like the Slaine of old, which is appropriate as the story takes place when he was an outcast, wandering with the dwarf, Ukko. It's Ukko who is the focus of the fun story, as Slaine starts treating him nicely, much to his surprise. It's a snappy script from Alan Holloway, complimented well by the art. Nothing deep here, but a treat for fans of the character. 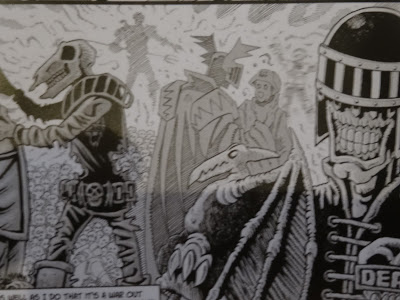 The final strip is another Dredd one, showing the love people have for the character along with the endless possibilities he has for scripters. "Rogue" sees Ed Whiting deliver a tight script that gives us something new and interesting, always a challenge in such a long running strip. Betrayal, undercover ops and body hopping come into play, and it's a strong read from start to finish. Artist David Broughton, as always, really helps with his energetic artwork using grey hues to good effect in a non colour strip.

So that's isssue 33, and as always if you're a fan of 2000AD you really should give it a go! While you're at it you can get the latest Futurequake as well.