THE NETFLIX METHOD - Is It The Way To Go?

It’s worrying that I’ve turned into the sort of old person I took the piss out of when I was a kid. I am of the time that discovered video games through the likes of the Commodore 64 and ZX Spectrum (Speccy rules!), who was amazed when my dad bought our first video recorder, and who remembers the first day that Britain went from three TV channels to four.

I’m used to waiting a week to see the next episode of whatever I’m into, and have always been happy to have it that way. This isn’t always the case, like when I only discovered ‘Breaking Bad’ some years after everyone else. I binge watched the hell out of it, catching up with the rest of the human race half way through the final series, at which point I joined them in waiting for each episode to arrive. Even though I’d watched the rest at a faster pace, the sudden slow down didn’t worry me – I actually enjoyed the suspense of the wait. 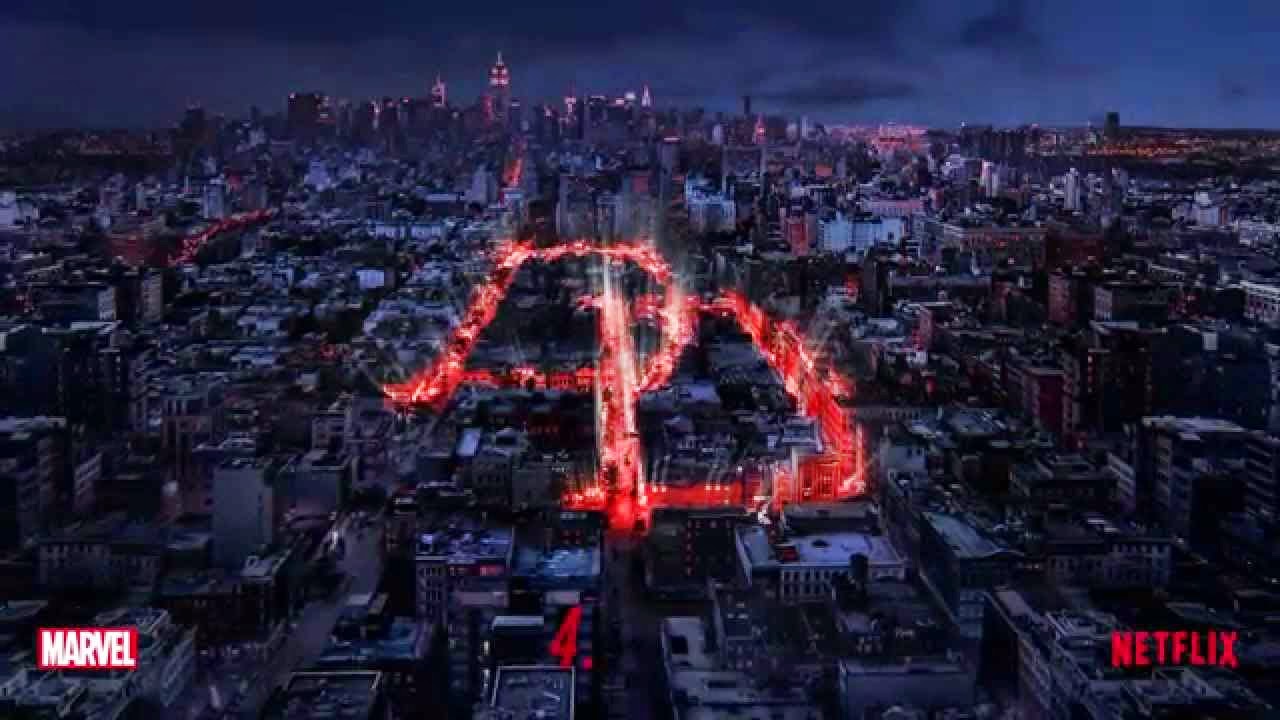 Similarly, I have been on tenterhooks during each of the three seasons of the excellent ‘Banshee’, through the entirety of ‘Spartacus’ and am ready once more for the next season of ‘Game Of Thrones’. The thing is, the first four episodes of GOT have been leaked online, and the temptation to watch is horrible. Last year I caved when several episodes of the new season of ‘Doctor Who’ were leaked, and I eagerly devoured the black and white pre production episodes, loving the fact that in black and white it seemed like I was watching in the sixties. It didn’t spoil my enjoyment when I rewatched them on broadcast night in colour, so why am I debating the merits of Netflix releasing all thirteen episodes of their new ‘Daredevil’ series in one infodump? 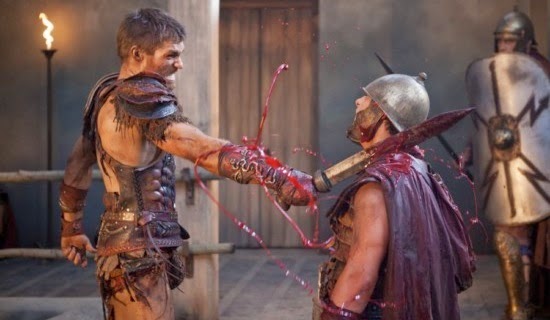 At this point, I’ve watched three of those episodes, and am enjoying the series immensely. If I watch a couple a day for five more days I’ll have finished the entire series in one week instead of the usual thirteen, and that’s not accounting for U.S TVs silly breaks in transmission. Part of me likes the fact that I can choose my own pace, but a bigger part is annoyed that I will never have the discipline to watch one episode a week, as has already been demonstrated. 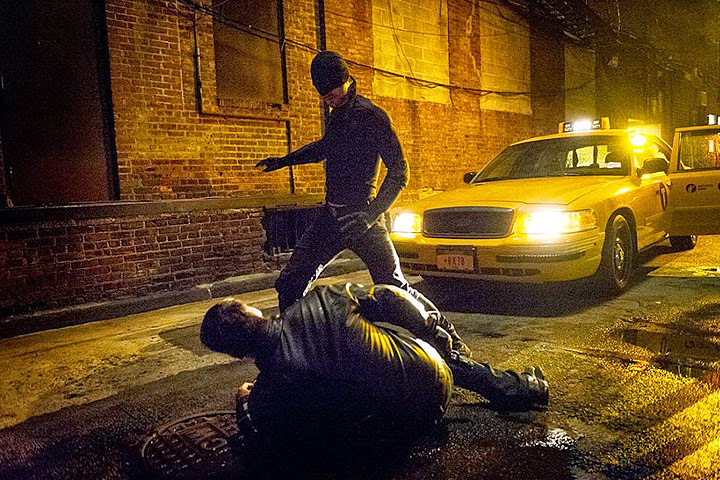 It’s like Halloween sweets, where sensible parents will take the haul and allow the kids certain amounts at a time, thereby making the treats last and avoiding puking children. There’s a reason they call it ‘binge watching’ you know. We are slowly turning into gluttons who want everything NOW, and will sulk if we don’t get it. If Netflix had rationed out the series one week at a time I would not enjoy it any less, and I genuinely think the wait would make me appreciate the previous episodes more, having had more time to digest whatever had happened in them. Now, though, I can (should I want) stay up all night and watch the lot, feeling sick instead of satisfied, feeling more ‘oh, is that it’ than ‘that was brilliant, can’t wait for the next series’. 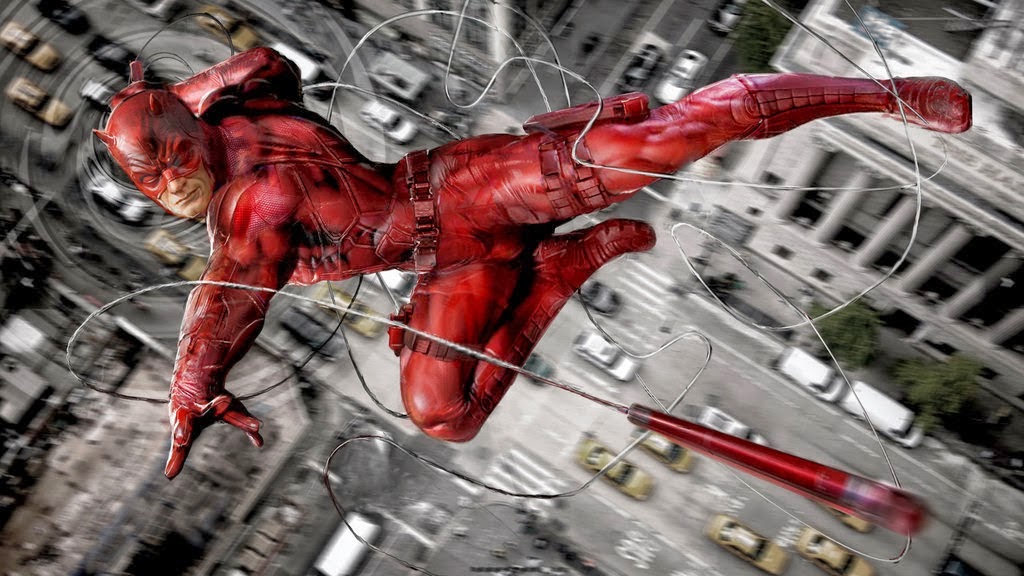 Some feel this is a sign of the future, but I have to disagree, and not because I am a grumpy old fart who thinks Channel 4 was going a bit too far. I like the fact that comics come out at intervals, rather than just dumping the story on you in one go, and I love the fact that TV does the same. It encourages kids (and adults) to appreciate a routine, to appreciate that waiting for something can help you get more out of it. Whatever your own view, please savour any anticipation you currently get from anything at all, because in the future it might not exist.
Posted by Alski at 06:35 No comments: 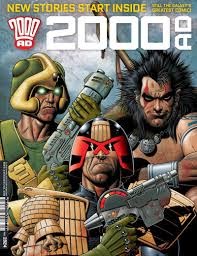 2000AD has defied the odds. In 1977 the date it was named after seemed so far away it was never imagined that the title would still be in circulation on that fateful date, let alone fifteen years after. Myself, I have read every single issue since the first, and remember throwing my free 'Space Spinner' and putting bionic stickers on my arm to be like John probe, also known as M.A.C.H 1 (don't ask). 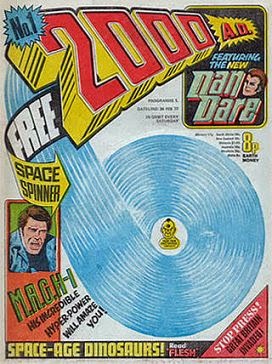 Every so often, an anthology comic like 2000AD likes to have an issue that contains the first episodes of stories, so that a new or lapsed reader can pick it up without being thrown in at a confusing half way point. Well, theoretically. Issue (or 'prog') 1924, on sale now at all good earth newsagents is the latest jumping on issue, with five stories presenting their first episode. Also contained are introductory pages to the characters which will hopefully explain to brand new readers what the hootin' heck is going on. The only potential problem is that all the stories contain characters who have been about in the magazine for quite a while, with the most recent being 'Grey Area', which debuted three years ago. 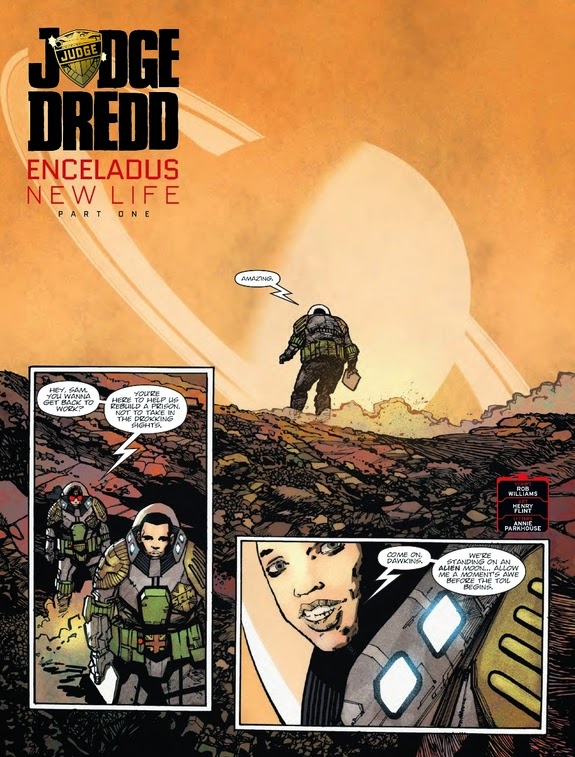 So this is more suited to lapsed rather than new readers, but this is always going to be the case with characters that have been in and out of the mag for over thirty years, as all the other strips have. Pride of place at the beginning of each issue is fan fave Judge Dredd, with a story that harks back to a revolt on the penal colony of Titan (where the bad Judges are sent), and a mysterious ship that arrives in mega City airspace. Whilst issue 1924 sets up the story, 1925 deepens the mystery and provides more questions than answers. Although co-creator and God on earth John Wagner has taken a writing break the strip is well served by Rob Williams, with Henry Flint providing his usual gritty and effective art. 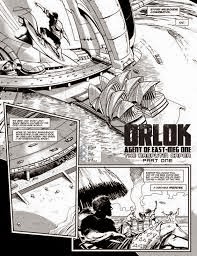 Strip 2 is 'Orlock: Agent Of East Meg 1', an occasional character who arrived back in the Seventies and refuses to be killed. In this, a quick follow up to his last solo story, Arthur Wyatt send the assassin down under for a story that screams 'retro', helped by the very old school art of Jake Lynch. Unfortunately it's not very exciting at all, and Lynch's sometimes muddy art doesn't elicit any of the thrills 2000AD is known for.

Earth Mother loving barbarian Slaine has been knocking around for donkeys years, with creator Pat Mills bouncing him through time to basically kick shit out of various magical knobheads. His latest jaunt is Book 2 of 'The Brutania Chronicles', and teh first two episodes are basically him having a scrap with a magical knobhead, both parties talking bollocks throughout. Although Simon Davies art is always welcome, reading Mills can sometimes be like wading through mental treacle, and this is one of those times, UWhilct I enjoyed his recent 'Savage' story, and many of the Slaine chronicles of the past, this is a yawn a minute and only worth a look for the exciting visuals. 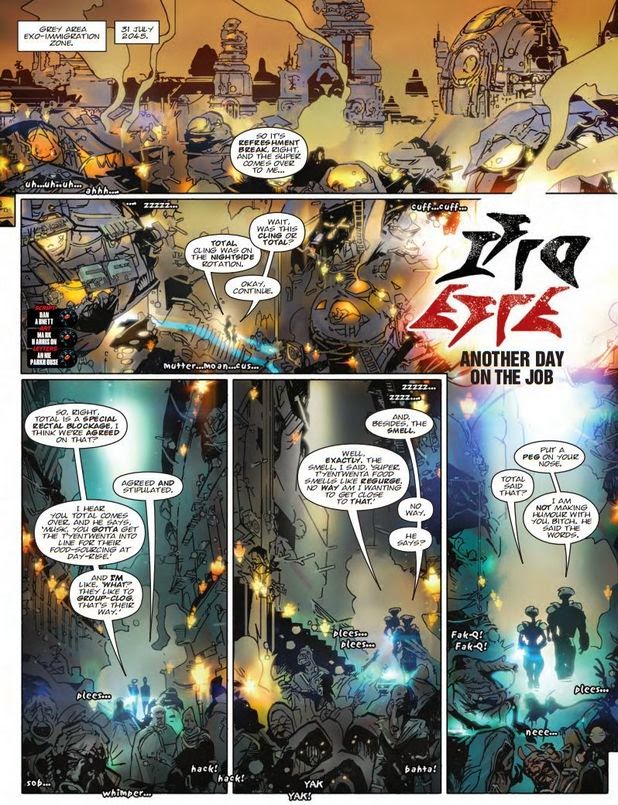 Next strip 'Grey Area' (that's 'Gray Area' if you're American) has always been a treat to read, with a good mix of humour and action, set in Earth's quarantine zone for alien refugees. In a clever twist, some of earth's Grey Area personnel have been bounced through a dimensional portal and landed in a parallel alien Grey Area. It's an idea with legs, involving planet eating monstrosities and silly alien names (Resting Bitch Face, anyone?), but I hope that things will return to normal soon. Artist Mark Harrison has always been a bit of a Marmite man, but he certainly does a good job here, being both clear and creative. 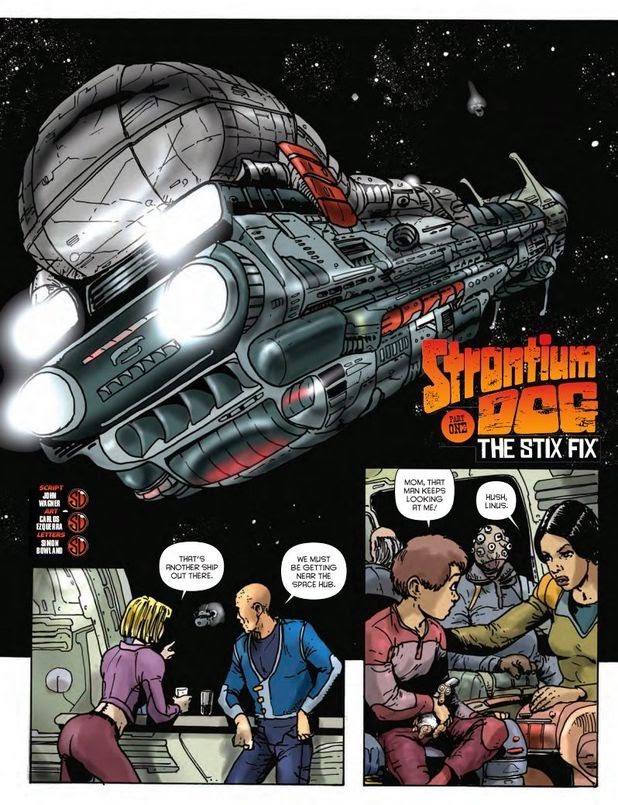 Finally, it's another return for 'Strontium Dog' a mutant bounty hunter who is second only to Dredd in popularity (probably). Titular character Johnny Alpha has been battered, bruised and even killed, but this strip sees John Wagner bring in a semblance of old school storytelling, using the strip to mock North Korea in the most unsubtle way and give Alpha what looks like a traditional get the bad guys and save the hostage type of story. Veteran artist Carlos Ezquerra is possibly the most infallible doodler the magazine has ever had, and as ever he doesn't put a foot wrong with colourful visuals full of movement.

With an anthology, it's impossible to please all of the people all of the time, and 2000AD knows this. There's no doubting the talent of all the people involved, and I know that even as I am unthrilled by Orlok and Slaine, there will be plenty of others out there who devour their exploits like a Klegg who has been on hunger strike. As ever, though, it's a testimony to the enduring appetite for thrill power of the fans who have stuck with it for so many years, plus all the noobs that have joined the party after 1977. If you stopped reading a while back, even years back, do yourself a favour and pick it up again. If you've never tried it, you really do have nothing to lose and everything to gain. 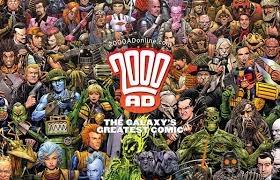 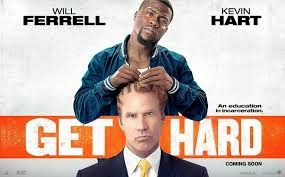 Now here's a movie title that will have you Googling in trepidation, and boy do the film makers know it. There's a scene in this buddy movie that makes full use of the schoolboy humour inherent in the two words of the title, and perhaps the best compliment is that it's actually funny instead of cringe inducing.

Will Ferrell is James, a successful stock trader who has everything - the job, the cash, the sexy girlfriend and the boss who just happens to be the girlfriend's dad. Everything is perfect until he's framed for fraud and is facing a long stint at San Quentin, deferred for 30 days by his lawyer and the need for a plot device. Cue Kevin Hart as Darnell, owner of the valeting service that James uses. As statistics prove that Darnell has been to prison (he hasn't), James pays him to prepare him for prison life, with the now inevitable hilarious consequences. 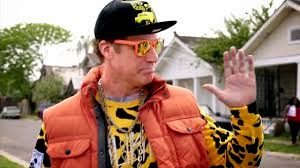 That, my friends, is basically it. James is an uptight but basically likeable doofus, whilst Darnell is a family man just trying to get some cash to get his little daughter into a school where she is less likely to be murdered. To be honest, I wasn't expecting much, but was very pleasantly surprised by a film that contains plenty of belly laughs and fish-out-of-water absurdity. The two leads play off each other beautifully, with Ferrell nailing the part and Hart showing the chops that will see his star rise higher. The script is tight, without any dull lapses, and a tight rein is kept on Ferrell, although the one time he has obviously been allowed to improvise (inventing insults for jail) is excellent. 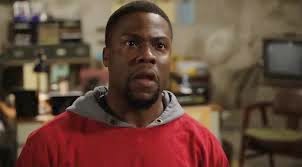 'Get Hard' is no masterpiece, but like 'Dumb & Dumber To' before it, it aims at a certain audience and hits the target repeatedly. Ferrell haters will not have their minds changed, but his fans should lap it up, whilst those who aren't bothered should have a fun time. Definitely not for kids, this is a silly romp from which most audience members should emerge smiling, and that's all you need sometimes.