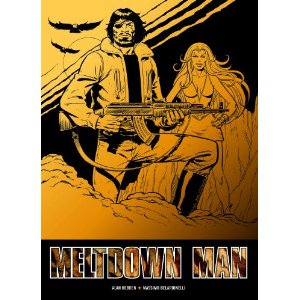 Okay, it’s time to dip a toe into the archives today, as those nice people at Rebellion Publishing have collected one of the best remembered stories from 2000AD in the form of “Meltdown Man”, which first appeared in late 1980 and went on for, ooohhhh… ages. It’s really an impressive length, to be honest, coming in at 230 or so pages. This is impressive because it’s a single, continuous story that had to be delivered in 5 pages each week, with each instalment having a suitably “gasp!” ending to keep you tuning in. Kudos must go to writer Alan Hebdon for that, even though his other strips never came close to this one in scope or entertainment. 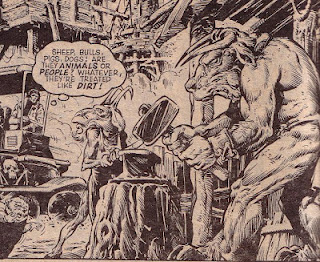 When all is said and done, though, Meltdown Man is Massimo Belardinelli’s baby, because there are few artists that could have brought it to life as he did. The plot concerns a hard assed bastard called Nick Stone, who is blasted into an alternative reality by a nuclear explosion (this sort of shit happened a lot back then). In this alternative Earth humans live in luxury and have Yujees as their slaves.  Yujees are genetically altered animals that are humanistic but with their original animal traits intact. They are brutalized and indiscriminately killed, something that gets right on Stone’s wick, and he resolves to free them from tyranny. The fact that there’s futuristic tech and plenty of animals plays right to Belardinelli’s strengths, as his humans have always been his weakest point (although still good enough). Quite simply, the whole story is beautifully illustrated, and what could have been an average script in the wrong hands is raised to a classic.

There’s elements of Planet Of The Apes here, as a human out of time fights against a totalitarian regime, and a lot of fun is had with the many, many different animals that get thrown at the reader. The ‘phone book’ format is perfect, as the price for such a long story is kept to a minimum. It can get a bit rambly here and there, and could probably have been stronger as a shorter, tighter script, but even with it’s flaws Meltdown Man is a fine example of a classic sci fi story that would not have existed if not for the Galaxy’s Greatest Comic. Check it out now.