JOE BONAMASSA: "Driving Towards The Daylight" 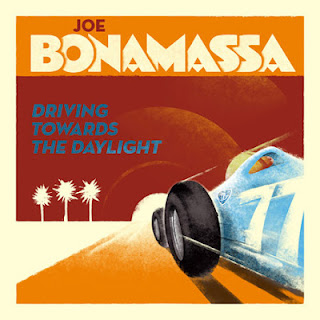 So here we are with album number ten from a man who has risen to be a modern blues legend, and rightfully so. As with much or his previous output, “Driving Towards The Daylight” is heavy on cover versions, and for the seventh time he has the reliable backing of Kevin Shirley on the mixing desk.

There’s only three original compositions this time round, (the least since 2003’s “Blues Deluxe”) and it’s a nice surprise that opening track “Dislocated Boy” is one of the best tracks on offer, a solid blues composition with a low down and dirty groove to it. Elsewhere, the title track follows this up very nicely, and the third Bonamassa penned track “Heavenly Soul” is equally as good. It seems a shame that a man who can write such good songs does so many covers, but I guess he just likes to play and play with other people’s tracks. Mind you, he sure does pick some cracking songs to cover, such as the Zeppelinesque “Who’s Been Talking” by Howling Wolf, which just sounds brilliant. Bill Withers’ “Lonely Town, Lonely Street” gets the Bonamassa treatment, as does Tom Waits’ “New Coat Of Paint” amongst others. Robert Johnson crops up as Joe covers “Stones In My Passway”, but perhaps the most surprising is the album’s closing track “Too Much Ain’t Enough Love”, originally featured on Jimmy Barnes’ seminal “Freight Train Heart” album. Barnes helps out with the vocals, whilst Bonamassa’s arrangement bluesifies the whole thing up without taking away what made the song great in the first place. This, it seems, is a talent that serves JB very well.

There’s really nothing on “Driving Towards The Daylight” that will disappoint Bonamassa fans, as it’s an incredibly solid offering with some great tracks. There’s nothing that breaks any new ground, but the blues isn’t about breaking new ground, really. This is all about great tunes played well by a guy who will be remembered for many, many years to come just like his own heroes.

www.jbonamassa.com/
Posted by Reviews Ed at 06:47