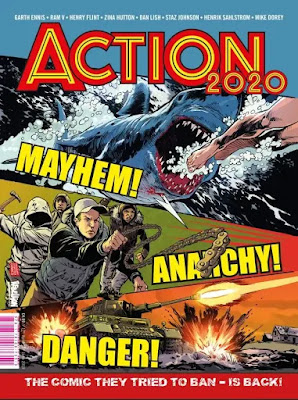 Well if this doesn't take you back, then nothing will. Action is legendary in UK comics circles as it was basically corrupting the minds of our sweet, innocent children. The fact that the little brats (me included) loved it was immaterial. The Sun made a fuss and WH Smiths refused to distribute it unless changes were made. As a result the next issue was pulped and redone, resulting in a comic that had less bite than Gums the toothless shark from Buster.

Fast forward a few decades and those nice people at Rebellion (2000AD, Roy Of The Rovers and much more) have released (or will do soon, when the coronapocalypse eases off) a special one off revisiting some of the legendary stories. The thing is, has enough time passed that they can do it with a little bite? let's tale a look... 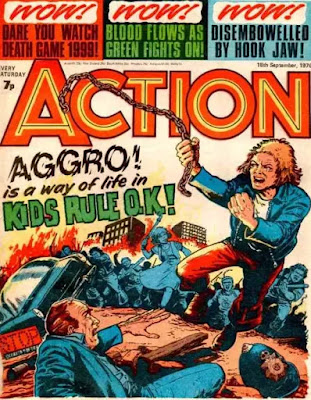 First up is 'Kids Rule OK,, notorious for featuring on Action's infamous cover where it appeared a kid was attacking a beat bobby. It's set in a Britain where the adult population has been decimated by a plague (wait a minute...) and kids basically run rampant. Scripter RamV has done indie and DC work, whilst artist Henrik Sahlstrom did Judge Death in the 2000AD Villains Special. The story is okay, mostly action with a plot that made me wince, and doesn't have a remotely British feel about it. There's many more more interesting takes on this that could have been played with, but it's, well, it's okay. Sahlstrom shines throughout, though, and his action work is spot on, bringing the strip up considerably.

Next up is 'Hellman', previously Hellman Of Hammer Force, Action's foray into the WWII genre. It was a good story originally, concerning a German tank commander who was not a fan of the Nazi party but still loved his country and did his duty. If I'm honest, this sort of thing is perfect for the likes of Garth Ennis, who loves both tanks and Germans who aren't caricatures, and bugger me sideways if Rebellion didn't think the same thing, as he's teamed up with veteran artist Mike Dorey (who actually drew the original) on this very tale, named Twilight Of The Reich. Fans of Ennis' previous tank stories will lap this up, mainly because it's excellent. Hellman and his crew decide to help a family fleeing the Russian advance on Germany (they've broken down) and have to face down four Russian tanks plus infabtry as a result. Mike Dorey's black and white art is fantastic, whilst Ennis's script is chock full of humanity not to mention some explosive action. I seriously can't find fault with this in any way, which is no surprise given the pedigrees involved. 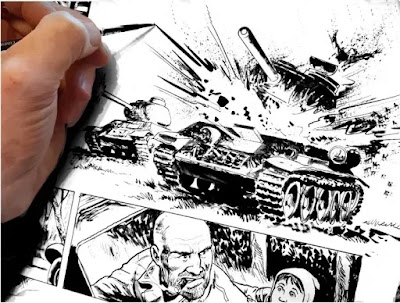 Oddly, Rebellion has opted to put a new story in rather than make it all about the classics, in the shape of  'Hell Machine', thakfully NOT based on their Zombie ARmy 4 game (phew).  It's scripted by Henry Flint, usually known for his awesome art on the likes of Judge Dredd and Shakara, and he also privides half the art, with Dredd artist Jake Lynch doing the second half (though mimicking Flint's work perfectly). It's a bloody odd one, this. It's set in a knackered society and we follow heroine Tase through a bunch of mad shit that I can't even pretend to understand fully. There's nice vsuals, and it's pretty interesting if you don't get a headache trying to work out what the fuck's going on.

Last but one is the return of Action's Jaws rip off, 'Hookjaw'. Fondly remembered for lashings of gore and the interesting experience of cheering on a killer shark, Hookjaw was a firm favourite. Karl Richardson delivers a dialogue free script, though he's billed as Quint Amity here, whilst Dan Lish provides the art. It concerns a fishing vessel who have a captured killer polar bear (Shako, natch) on board, and Hookjaw's interference in this fact. I won't spoil what happens here, but suffice to say it's laden with gore and violence and is a ton of guilty fun that needs to be continued! Full marks to Lish, who's colour art owes a debt to the likes of Robert Crumb yet has a style all of it's own that works really well.

Finally we have 'Dredger', Action's take on Dirty Harry mixed with The Sweeney. Zina Hutton scripts, with her only previous comic work being on a Judge Anderson story, and she's backed up by well respected veteran comics artist Staz Johnson.  Although the art is fine, the story is rather bland, not halped by an odd lettering style that simply looks wrong. I wanted something gritty and streetwise, I got a lame James Bond knock off. Definitely the worst strip in the bunch in every aspect.

So, as with all of Rebellion's specials, it's a mixed bunch. It's rare that everyone likes everything, though, and I'm sure that your opinion will differ to mine. Of course you need to buy it to find that out, and even though it's not top of my list this Action special is certainly worth checking out, once you've fought your way through the zombie hoards to get it...