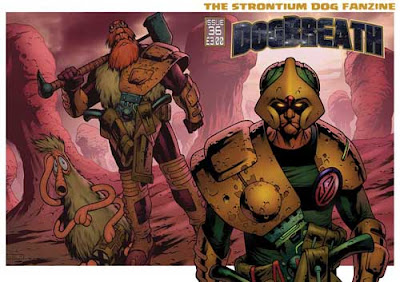 Like a terrier snapping at the heels of a badger, Dogbreath issue 36 screams 'buy me as well' at anyone who has sampled the delights of the latest issue of Zarjaz, coming as it does from the same stable. Unsurprisingly dedicated to the galaxy's greatest bounty hunter, the superb exclusive cover from comics legend Colin McNeil tells you straight away that this is a good un.

This issue kicks off with 'Back To Basics', from writer Daniel Whiston and fan favourite artist David Broughton. We find Johnny hanging from the neck on a gold mining colony, with no weapons and seemingly no hope as his air is slowly cut off. Then he dies – the end! Nah... of course not, but to find out what happens you'll have to read it. It's a very good tale indeed, with a Western-y vibe that has always suited the character and first rate art from Broughton (including the least subtle Carlos tribute EVER). A great start. 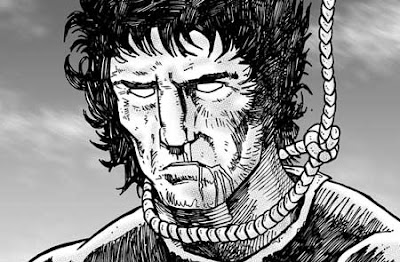 Next up is that crazy Scottish mutant Middenface McNulty in 'McNulty's Law'. Kev Hopgood tells a tale of a mystery man (complete with a bag on his head) being transported through the rad wastes. Naturally, it all goes shite shaped, but you know that at some point someone is going to be told 'Take your lumps like a man', and that's fine by me. It's all a bit political (possibly an accurate picture of post No Deal Britain), with some nice art from Richard Waugh that helps carry the story. At fourteen pages it has a strong whiff of the overlong about it but it's well presnted and does a nice job of displaying the UK in the time of the Stronty Dogs. One thing bugged me a bit, and that's that McNulty does not seem remotely Scottish in anything he says – Hopgood needs to be reprogrammed with McNulty speech patterns before he does the character again, ye scunner!

Away from our regular characters next, with David Fenn delivering a Strontium Dogs tale, aided and abeted by artist Adam Caudill. It concerns the Weyland mutant prison (although it says 'HMP WAYLAND' on a big ass sign – woops!) and the sinister goings on within. Tobe brutally honest it's the opposite of the previous story, with ten pages of story squeezed into five. Caudhill does his best with a solid art style, but in the end it's one of those stories that left me scratching my head at the end, wondering who the characters had been and why I should care that much. 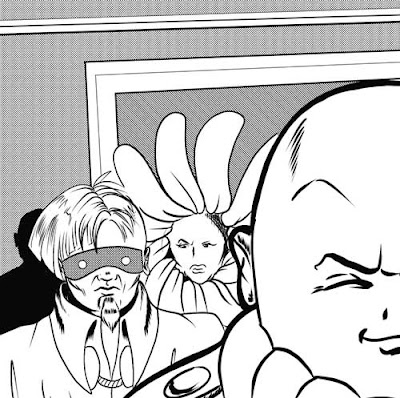 Seasoned scripter Matt Sharp is up next, paired with Gail Nedry for a Durham Red tale set in Egypt, so scope for plenty of crypt action. Although Red's appearance is limited to the end, it's a smart story that works very well. Nedry's art (showcased well in Rogue Trooper for Zarjaz) ,is scratchy but endearing, with a fleeting similarity to Mike McMahon in the early days. Overall this is a really solid entry that keeps things simple but stays smart regardless.

More Strontium Dogs now, as Mark Keenan and Scott Twells bring back the potato headed Spud Murphy, and yes, there is a chip pun included. In 'One Patoot, Two Patoot', we get a slightly muddled story of murder on a patoot farm. What's a patoot? Some sort of alien vegetable, and that's all you get from me. It's another strip that may have benefitted from an additional page to flech out a couple of things, but has a decent core story and nice art from Twells. 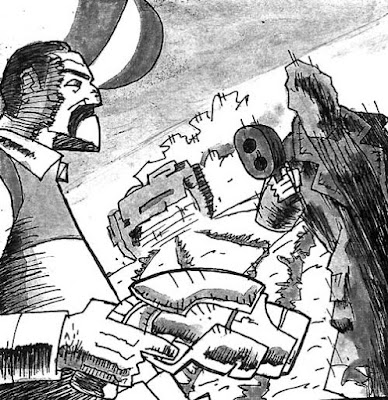 Matt Sharp returns for the last story, another Strontium Dogs tale 'What Goes Around', this time assisted by artist Matt Sandbrook. Their story of a couple of executions is a simple concept but one that's remarkably effective. The art is really good, although the main character could have been more distinctive, and there's very little not to enjoy here despite the pitch black story idea (or maybe because of it). 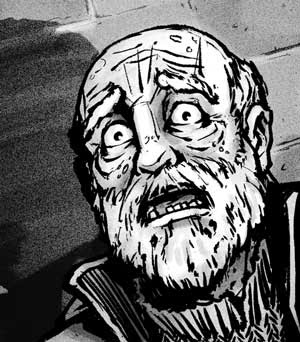 As ever, Dogbreath is certainly worth picking up if a little less structured than Zarjaz. The art throughout is worthy of attention and there's decent writing that may have flourished better in a couple of cases with an an extra page to play with (that could have been taken from' 'Weyland' tbh). Personally, I wanted another cool Johnny Alpha story, but that doesn't detract from the enjoyment the stories included provide.

It can be bought from the Futurequake website HERE
Posted by Reviews Ed at 08:15