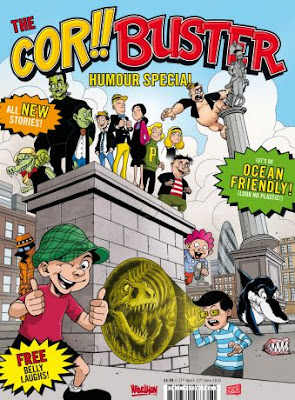 As someone who has entered their second half century, I'm well placed to remember British humour comics, having grown up with the likes of Monster Fun, Whoopee!, Whizzer  & Chips, Beezer, Krazy and many, many more. It seemed that every other month there'd be a new title unleashed as another was sucked into another comic to make room. The all conquering behemoth was Buster, which ran from1960 to 2000, swallowing up a multitude of other titles along the way. Headed up by Buster himself (originally billed as Andy Capp's son) it was a constant delight. One of the comics that ended up as part of Buster was Cor!, a similar title that launched in 1970 and ran for four years, and Rebellion have dug out characters from both (and more) to give today's kids a taste of some classic characters.

It all starts off extremely well with Sweeny Toddler getting a page to himself as "Sweeny's Soap Box", with a funny few lines to get you in the mood for his main strip on the following three pages. Writer and artist Tom Paterson dserves tons of credit for starting off this revival with as much talent as was ever seen in the original comics. It no doubt helps that he is an old hand, having drawn Sweeny before, as well as Grimly Feendish, Buster and more. The strip is genuinely funny for both kids and adults, with tons of visual gags squeezed in around the story of Sweeny going to nursery for the first time. I'd happpiy read a whole volume of this (there's one coming soon, readers!), and to say it's worth the entry fee alone isn't an exaggeration. Me like! 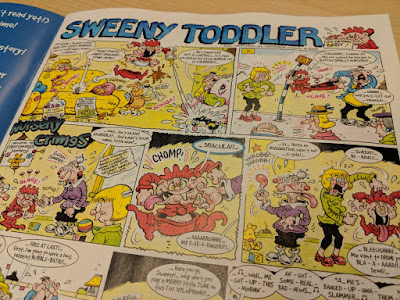 Monster Fun was one of my favourite comics, and when it merged with Buster I happily went with it. One of the strips was Kid Kong, unsurprisingly about an oversized gorilla who was definitely NOT King Kong's son, as that would get Universal's lawyers on the phone (but he was, really). Obsessed with bananas, he returns courtesy of scribe Alec Worley and artist Tiernon Trevasllion. The wonderfully banana-centric plot concerms Kid and Gran (who he lives with) going to Banana Con, the convention for banana lovers. Of course, Kid scarfs down too many "Dragon fire bananas stuffed with curried baked beans" and hilarity, as they say, ensues. It's a silly little tale, good fun and with a decent payoff line. Trevallion's art does a decent job and the script is light and fun.

Another old favourite is Faceache, who started off life in Jet from 1970, a creation of comics legend Ken Reid. He is a bit of a twatty little boy who can change his face into almost anything, often accompanied by the classic "Scrunge" sound effect (a bunch of the single page originals have been collected in a rather spiffy book that is highly reccommended). This time round he's had a bit of a makeover as Steve Mannion has given him a non-scrunged face that looks as grotesque as some of his monster faces. He's been teamed up with another Ken Reid creation (from Monster Fun), Martha's Monster Make Up, featuring a girl called Martha who has make up that turns anything it touches into a monster (well, duh!). Writer Ned Hartley delivers a neat little two pager that Mannion's art compliments nicely, and it should certainly get a chuckle or two out of the readers. 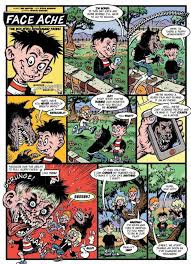 Yet another Monster Fun title (Hmmm... maybe this should have been the Buster and Monster Fun Humour Special) is Gums, who is a great white shark that needs false teeth. His nemesis Bluey, a surfer dude, keeps stealing them so as to render the shark harmless. That was the plot, every week, and so help me it was always fun so what the heck. Lizzie Boyle and Abigail Bulmer tackle this one, with Bulmer providing clear art that would be quite at home in The Beano. The script is pretty run of the mill but does a good job of retaining the original's humour with a totally up to date plot.

The first duffer comes in the form of a two pager featuring X-Ray Specs, in which a kid called Ray has glasses that allow him to see through stuff. It was always a bit of a naff strip when it was in (where else) Monster Fun, and things haven't improved much as Ray goes afer his Dad's wedding ring that falls down the plughole (really?). Sammy Boras' art is decent enough, with large, clear images, but Grainne McEntee's script is not big or clever or even funny.

I have to confess that I don't remember the next strip, a Buster original (I think) called Deadly Hedly, about a vampire detective. I was encouraged by the art fron Neil Googe, who provides the brilliant visuals for 2000AD caper Survival Geeks, and so approached it with good humour. With references to the fact the strip has been mothballed for a fair number of years and an opening exchange worthy of Morecombe and Wise, it's clear Paul Goodenough had his tongue in cheek when writing this, realising it would be read by old buggers as well as kids. It doesn't really go anywhere in it's two pages but is simple fun and full of (after)life.

There's 2 pages of child friendly puzzles next, after which comes a fruity foursome consisting or Ivor Lott and Tony Broke along with their female counterparts Milly O'naire and Penny Less. As you can probably guess, oen of each pair is poor, with the other rich (and a total twat). Ivor and Tony are the first characters here to orginate in Cor!, whilst the other two came from Jackpot, launched later in 1979 but not averse to a bit of recycling. 2000AD editor Matt Smith provides the story, whilst Tanya Roberts does a decent job, even if the lines are a little thick and the colours (in my download preview, anyway) too muted. It's... well, it's an okay strip but it never takes off or does anything too fun, and the end is just daft rather than fun daft,

Things get interesting now, with a three page look at some of the classic titles of yesteryear that is followed by a strip called "Who's In Charge" that brings together a multitude of characters that have just been discussed (pay attention, children!) as they argue about who should edit a new comic. It's only three pages but John Freeman's fun script is enlivened by Lew Stringer'senergy filled artwork. It points to a new comic being released at some point in the future, and I hope it's not just for the strip's plot, as it would be great to see a 'proper' comic joining The Beano and The Phoenix that concentrates on characters not free gifts. 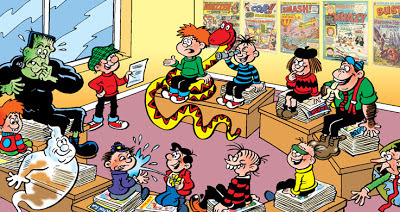 Out of the pages of Krazy (and later Whizzer & Chips) comes Hit Kid, in which a trenchcoated kid gets revenge for children who have been wronged by bullies, parents, miserable adults etc. In a nice twist, Hit Kid has quit, with bullies running rampant, but his son appears to take over the mantle and deliver justice wherever needed. A snappy script from Robin Etherington keeps the fun coming and really works well with David Follett's art. Although only two pages, it introduces the character perfectly, gives him something to do and even gives a little giggle at the end. Ivor Lott and pals should have been this good.

One of the more unusual Buster merges was when it swallowed Oink! comic in 1988. Oink! was a pig based, rude humoured comic that did a good job of being funny to kids and adults alike, eventually finding itself condemned for being a bit too adult for it's own good. Although not an Oink! strip, "Swines Of Anarchy" is Oink! in everything but name. Very respected comic artist Pye Parr does an excellent job on The Feek's story of a pig biker gang at war with a monkey biker gang. It's lots of fun with a couple of bits that kids will snort at as intended. Definitely brings home the bacon, this one.

A veteran of several different titles (and yes, including Monster Fun), Frankie Stein is a bumbling monster forever getting on the tits of hs 'Dad', the scientist who created him. As usual, the poor Professor is being eaten out of castle and home by greedy Frankie and so invents a growth ray, like you would, to make all their vegetables bigger. Naturally, everything goes all Pete Tong, with Cavan Scott's script keeping things barrelling along in a silly way that's still bettter than Von Hoffman's Invasion (an old boys comic strip with stuff growing big). Speaking of Hoffman, Mike Hoffman's art works very well here, although the pastel colours do seem a bit soft.

Another lesser known character is Disappering Trix, a girl who turns invisible when she blinks. In the two page strip by Karl Stock and Andy Clift she helps the town sort out an invisible monster, though why only she can do it is very unclear. There's a couple of decent gags about the readers imagining the action (because it's an invisible monster), but overall Trix should have stayed disappeared.

There's a nice two pages of horoscopes next, featuring lovely Ken Reid creations with a silly rhyme each,  strangely called star signs when Horror-Scopes was begging to be used. After this it all goes a bit odd, as Fuss Pot meets Captain Crucial in the weidest match up of the comic. Fuss Pot is, well, a very fussy girl who originated in the 1970s, whereas Captain Cricial is a cool superhero from mid 90s Buster. It's a pretty mental two pager that certainly crams alot in and is lots of fun to boot. Full marks to Lee Langford and Edward Whatley for managing to make this work.

Hire A Horror comes next, a strip that never survived the merger between Cor! and Buster. In it, people can hire a horror (these literal titles, eh readers?), at which point things predictably do not go as planned. In the new strip, penned by The Feek (nope, no idea), a man wants to stop the heavy metal band next door keeping him awake. A simple set up that gives plenty of room for big, colourful fun (provided by artist Mick Cassidy)

After a new Creepy Creation from Brett Parson, we come to the final strip. This chap is the oldest of the bunch (apart from Buster himself), first appearing in an issue of Wham! in 1964, as the nemesis of Eagle Eye, Junior Spy. Yes, it's the lovable bad guy (and obvious basis for Groo in Despicable Me) Grimly Feendish. Another slice of genius by Leo Baxendale, Grimly is brought to delicious life by Sweeny Toddler artist Tom Paterson, and he again does a masterful job on the single page story. Ned Hartley matches him with a neat script, and to be honest it's the perfect way to finish this trip down memory lane.

If you've got kids, then buy them this as it's full of funny, silly, inventive strips featuring characters who still deserve to be loved today. If you're just an old fart who used to buy these comics in your misspent youth then buy it anyway, as there's enough genuinely funny stuff to go along with the nostalgia.  Everyone wins here, and if you don't like it just hire a horror to go and bust up Rebellion HQ. Sorted.