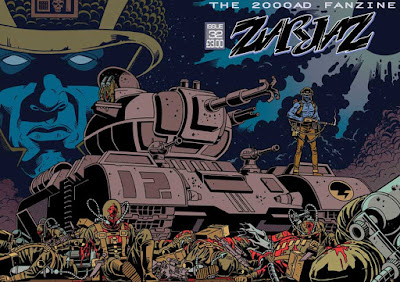 Zarjaz  (Betelgeusian for 'Excellent") is a long running independent fanzine, dedicated to all things 2000AD and noted for the quality of it's contributors, some of whom have gone on to make the leap to the granddaddy of British science fiction comics. Each issue is lovingly compiled by editor Bolt-01, and it's a hard nosed grexnix who doesn't find something to enjoy in each issue. 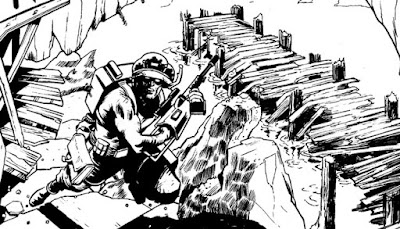 Issue 32 kicks off with a wonderful Rogue Trooper cover by Paul Williams, one of the Zarjaz alumni to now work for the real deal (as it were), and he does the blue skinned battler justice, naturally. this leads on to opening story, a Rogue Trooper story, "Silent Night", by Matt Sharp, illustrated by Alex Paterson. It's a corking way to start the issue, and uses a clever plot device that means that most of the action is without sound effects or dialogue. Thankfully Matt Sharp does an excellent job and the result is a pleasure to read and a perfect one off for the character.

A break in the strip action sees a three page tribute to the Lawmaster himself, Judge Dredd co creator Carlos Ezquerra, who took the Long Walk recently. Featuring Zarjaz creators words and pictures it's very touching and reflects the love and respect we all had for the man who will be fondly remembered for many, many years to come. Appropriately, the next strip is a Dredd one, as Alan Holloway and artist Andy Lambert bring us the light tale "Work In Progress". It's a throwback to the old days of the strip, focusing on the citizens rather than the judges, with Dredd himself appearing in only four panels. A fresh take on the need for Mega City One's unemployed to have a hobby, it's light, original and shows Andy Lambert to be one of those to watch in the future if the crisp, clear linework displayed is anything to go by. 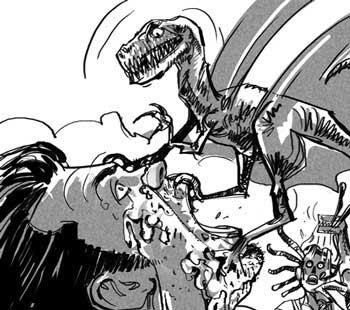 Next up is a highly unique take on the world of "Flesh", taking part in the offices of the corporation bosses as they review a recent taping of the cooking show "Masterflesh". Despite the (brilliant) pun it's not a silly story, and writer David Fenn channels his inner Pat Mills very well. Artist Uwe De Witt does a fine job of balancing the satirical and gory moments, resulting in a nice, complete strip that successfully builds on the background of it's inspiration. 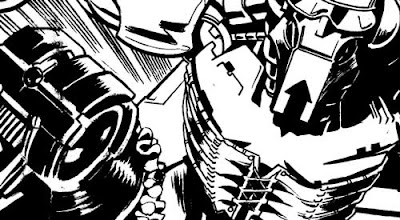 Everyone's favorite cool robot Joe Pineapples comes next, in a solo strip from writer Lee Robson titled "37". Concerning Joe's 37th assassination for the X-terminators, it is similar to the opening Rogue Trooper story in that the art is essential to carry a story with precious little text. Luckily, Alex Paterson does a bang up job of a script that's bursting with action, with the finished result my favorite strip in what is an exceptional issue. Above all, it focuses on what essentially makes Joe the cool character he is, and nails that tricky line with ease. 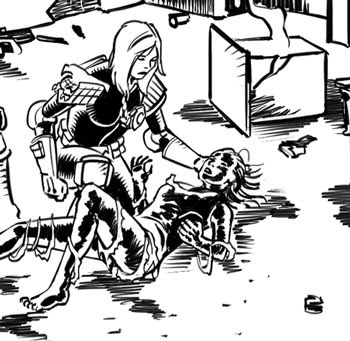 Although nearing the end of the issue, the thrill power doesn't let up as we return to Dreddworld for a strip starring Judge Anderson. I love a dramatic full page opener, and this doesn't disappoint, as Russ Leach immediately makes the reader sit up and take notice with a picture of a father slapping a young girl and saying he never should have had her. It doesn't tell you anything else and made me immediately want to find out what was going on. The resulting story is a simple one but no less effective for it, and writer Keiron Moore can be justly proud of doing a great job of not only telling a compelling mystery but of rounding it off with a tear jerking finale. 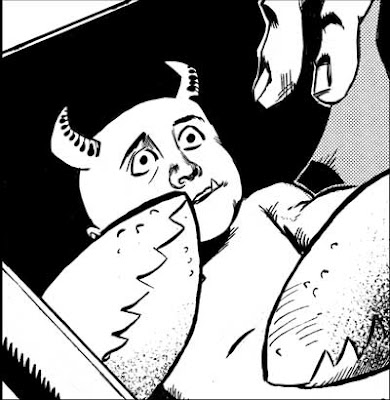 Dredd's universe stays with us for the last two stories, with "Boatman" coming under the "Tales Of Mega City One" banner. It's another almost dialogue free script, from Steven Fraser this time, and is a sort of mutant fairy tale that's quite affecting in it's own way. At first I wasn't too sure, but after a re read I really started to appreciate the sweet story for what it was. Jack Davies provides very nice art, and the whole thing reminds me of the Bob Byrne stories that one appeared in 2000AD. 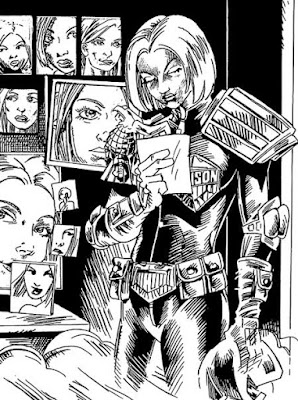 Last but not least is part three of "The Descendants", Robomonkey147's generation spanning tale set in Mega City One. If you've read the first two parts you'll not be disappointed with this conclusion, which ties up the story ends in a well drawn and emotional way. It's certainly a good way to round of what is probably the best issue of Zarjaz! I have ever read. There's not a duffer in sight, in scripting or art, and I can genuinely say that if the work here was scaled up and released as an official publication it would put some of the parent specials to shame.