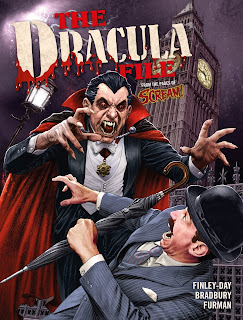 Mwah ha ha haaaa.... and words to that effect. 'The Dracula File' came at us poor innocent souls back in the 1980's courtesy of Britain's first home grown horror comic 'Scream'. Not as nasty as those EC comics that caused all they hysteria in America (and ruined comics for a while), Scream was a brave attempt to try something new, so of course it didn't last nearly as long as it should have. In actual fact it only lasted a measly 15 issues, delivering macabre fun from a wet, windy March through to a no doubt just as wet and windy June of 1984. 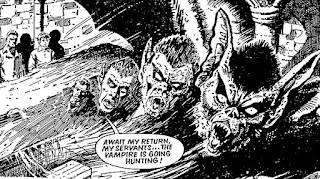 We've already have the Alan Moore initiated 'Monster' in collected form, and once again Rebellion have used admirable judgement to bring another cracker kicking and SCREAM-ing (ahem) onto our bookshelves. The Dracula Files is not, as I thought, one off stories about vampires and other mythical munchers, rather it' a continuous saga featuring the bloodsucker of all bloodsuckers himself. Set during World War 2, we find Dracula being taken in by the British (dur) as a defector, and of course they bring him back to Blighty. Dracula isn't that grateful (who'da thunk it) and proceeds to create mayhem as he feeds. He does the old turning-into-a-bat trick as well as using puny humans as brainwashed servants, and as he gains a foothold a KGB vampire hunter gets ever closer until... 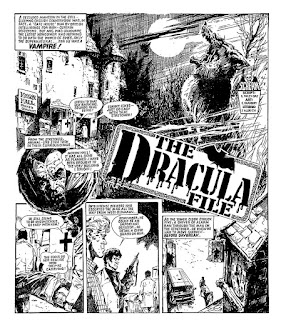 And that's it, gentle readers. You see, because Scream only pasted 15 issues the story was never finished. There's a few bonus strips from specials included, but we will never know just how long Gerry Finley-Day and Simon Furman intended to drag (drac?) out the story. My guess is 'as long as we can get away with', and I think it's safe to assume that Dracula would not get killed but would go into hiding and come back after a suitable rest of ten issues or so. Such is the way of comics. 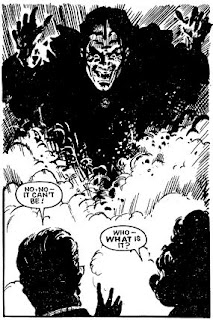 The Dracula File is a blast, really, even if it was never finished. The glorious art by Eric Bradbury still impresses, and Finley-Day masterminds a rollicking yarn that manages not to repeat itself as Dracula is thrown into a world that, although unfamiliar, doesn't seem to faze him one bit. It's nothing ground breaking but instead a nice twist on a familiar tale delivered by talented people. Hats off to Rebellion (yet again) for buying up the rights to all these old classics and giving old and new fans the chance to discover or rediscover them. Fangs a lot guys (grone).