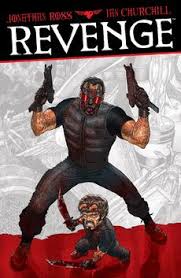 Jonathan Ross is very well known in the UK as a radio and TV presenter, though not so well known as a massive comic fan and sometime author. His first effort, ‘Turf’ was a novel premise that mixed gangsters, vampires and aliens, but was too long winded for me. He hit pay dirt with his novel people with powers book ‘America’s Got Powers’, which read a lot like a book from his friend Mark Millar, aided be superb visuals from Bryan Hitch. For his latest, now collected in book form, he has gone in another direction – gross out violence 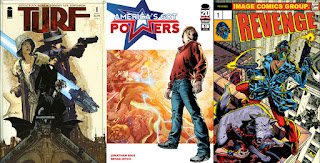 ‘Revenge’ concerns aging action movie c-list star Griffin Franks, whose forty year old character ‘The Revenger’ gets a lucky relaunch and turns him into a star again. Convinced by his trophy wife to nip down to Mexico for an anti aging skin graft, he is betrayed and left with no face or fingertips, in constant agony. In the manner of his famous character, when he inevitably gets loose he and a dwarf with horns grafted to it’s head (don’t ask), pop back to the U.S.A for some bloody, violent revenge. As you would… 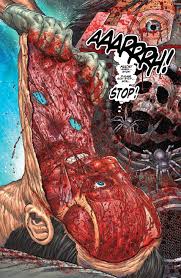 The scripting for ‘Revenge’ is decidedly wobbly and at times unconvincing, and it’s like Ross just wrote it whilst on the toilet over the course of a few days. It’s left up to artist Ian Churchill to breathe life into a twisted version of a standard premise, which he does so with gusto. This is a blood soaked tale, make no mistake, and thanks to the art it mostly succeeds in being readable and at times quite fun and entertaining. If it was a film, it would be straight to DVD, but there would be plenty of people enjoying it’s over the top bloodlust. 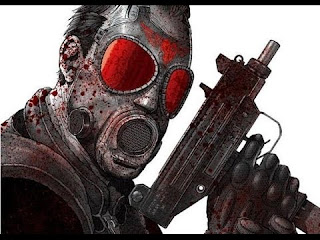 Three very different stories have come from Ross so far, each with their own pros and cons. ‘revenge’ is probably the weakest of them, substituting gore and tits for a solid script, but as I say it still has a charm that will please fans of over the top action, the ‘Crossed’ crowd especially. Worth checking out, but forewarned is forearmed.
Posted by Reviews Ed at 04:00