Science fiction conventions have an odd reputation amongst non science fiction folk. The thing is, any hobby which involves dressing up in often expensive costumes will always encourage dickheads to draw their swords of sarcasm because in the end they just don’t get it. A friend of mine dresses up in Nazi regalia for historical re-enactments, and whilst some people say he’s sick I don’t see much difference between that and dressing up as Doctor Doom, or if you’re at Lawgiver make that Judge Cal, Judge Death or even the ultimate evil Rob Schneider. 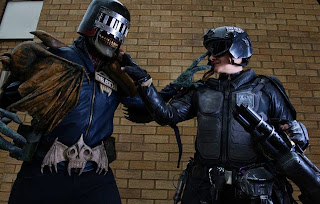 Often these little shindigs take over a section of a hotel or warehouse for a weekend, but Lawgiver II took a step into left field by taking over part of a hotel on a bank holiday Monday, like you do. It’s a relatively small con (that’s short for ‘convention, noobs) that is, as evidenced by the name, only it it’s second year. This means that unlike the big bullies of the con world it attracts somewhere over a hundred fans, rather than several hundred or more. The good news is that this year was more successful than last year, so Lawgiver Mk III is pretty much a go. 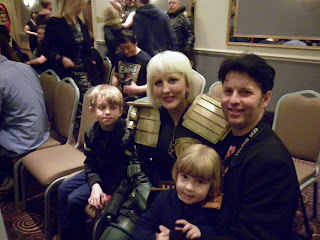 The first thing that smacks you in the face at any con is the people in costume. Being a Judge Dredd themed con (sorry, was that not clear?) there’s quite a few people decked in judge’s uniform, many based on the excellent film released in 2012. We also got some Dark Judges, chaps that want to kill everyone in the world because they have worked out that only the living commit crime. Just think of the Tories but with cooler outfits. One of the standout costumes was the only one not actually Dredd Related, as serial perp Joanne Alexander dressed as a disturbingly sexy Marsahall Law, another baton wielding fascist, this one created by 2000AD mainstay Pat Mills. All of those in costume were happy to show off and pose for photos, with a bunch of them descending on Bristol City Centre to confuse and terrify the locals. Perhaps the most innovative costume came from Darren Smith, who came as a 2000AD cover featuring The Dead Man (a memory loss form of Dredd). 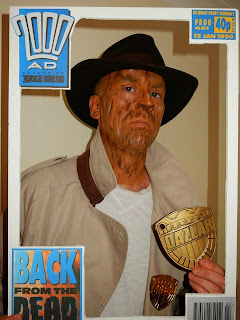 Apart from costumes, the second most important ingredient to a good con is guests. As this was a small con it didn’t exactly have a plethora of the buggers, but there was some superb talen from the world of 2000AD and comics in general. For a fee that varied from artist to artist, attendees could have a sketch of a 200AD character (or whatever they wanted, really) done by actual artists who get paid to do this shit. 2000AD legends Jock, David Roach, Patrick Goddard, Dylan Teague, John Higgins, Dave Taylor and Nick Percival were all there, as was Ryan Brown, more known for some stunning poster art than strip work. Also there was scripter Rob Williams, who talked me into buying a copy of his excellent ‘Ordinary’ trade, and already legendary Dredd scribe (amongst others) Mike Carroll. They all had various stuff for sale, and all were, in my experience, a pleasure to chat with. David Roach brought with him a pile of other people’s original art that he has collected for years, and it was a guilty pleasure ruffling through it, trying desperately to treat each loose piece with care and not leave marmite marks all over it. The highlight for me was Patrick Goddard, a man who sketches like no one else for a measly few quid and whose black and white art is being almost criminally coloured in for a forthcoming Dredd story. 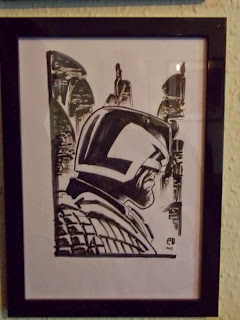 The next thing that cons are known for is panels. This is when a few guests sit at the head of a room (preferably with alcohol if they’re Scottish) and chat about a pre-selected topic. Of course, all the topics were Judge Dredd related, from the architecture of his world to anything the guests would stick into Room 101 from the history (Walter the Wobot being a unanimous vote winner). When the hosts questions are exhausted the attendees get to ask whatever is on their own minds. It’s a tried and tested formula, but I found that topics would drift as the artists conversations took their own routes. This meant that they would accidentally discuss topics that were set for a later panel, but it was still all good fun. The problem with just having artists on a panel was that they would naturally answer everything from an artist’s point of view, such as Dave Taylor wanting to ditch Dredd’s Lawmaster bike purely because he can’t draw it! Perhaps the most heart breaking revelation of the day was Jock basically telling us what the sequel to Dredd would have been about if the first had made enough money, and it was frakking perfect. 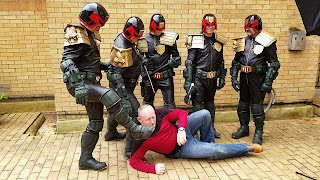 An interesting part of the con was what was effectively a village fete section, where you could play daft games to win Tomobla tickets (you know the drill – ending in a one or a five for a prize). On the surface this may seem a little silly, and under the surface it was definitely a little silly, but we were all there to have fun, not scowl at everyone, and by the end of the day all the prizes had been claimed. Much silly fun had been had as people pinned the badge on the Judge, whacked a perp (instead of a rat) or fired nerf projectiles at lawbreaker cut outs. A rather ingenious way to raise funds. 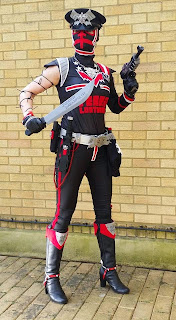 In the end, Lawmaster Mk II can only be considered a success, a case of onwards and upwards as it gains a reputation and, through that, more attendees. Dressing up is totally optional, and I didn’t meet a single person who wasn’t up for a chat, and by that I mean attendees not famous bods. It’s all about the community of people that have a strange love for the Judge that is Dredd and his insane world. I loved it, and although there will ALWAYS be ways to improve something this was a very smoothly run day of lawful fun for everyone. Keep your eyes open for next years, as it will be the most fun you can have with a nightstick and double whammy.
Posted by Reviews Ed at 07:15