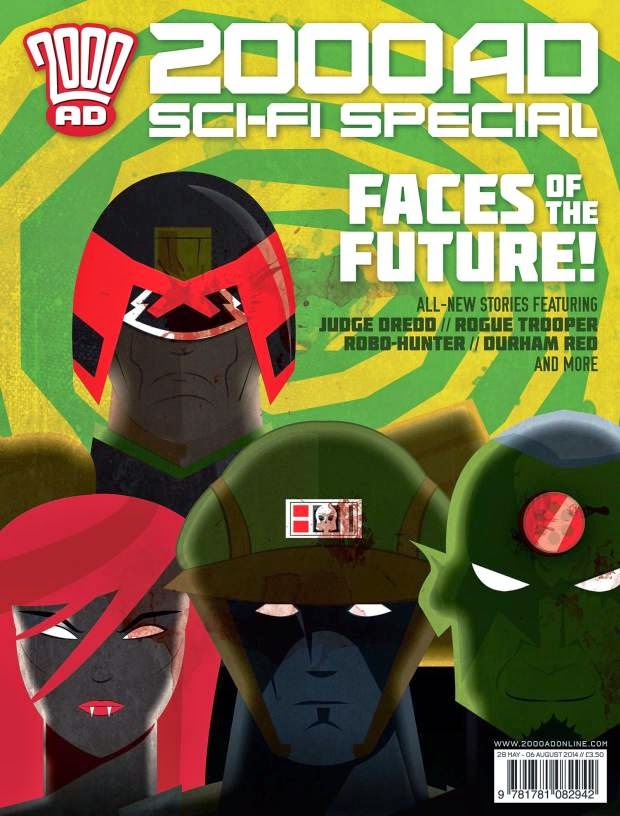 Available in the shops from 28th May


“It was one of the staples of hazy childhood summers, an extra dose of Thrill-power for the holidays. But now the 2000 AD Sci-Fi Special is back and with a new mission - to unveil a new generation of comics creators!” So goes the promotional hoo-haa that came with my copy of this blast from my past, a bleedin’ Summer Special, no less.

I have great memories of being a wee man and my mother buying a few Summer Special’s and saving them for us to read in the car on the way to some wretched caravan park or other. As a kid, it was nice to have an oversize comic, although as an adult you notice more the large panels designed to pad out the likes of The Beano and Dandy specials. 2000AD was, predictably, different. Not necessarily in a good way for, like the annuals of the time, the Summer Special was stuffed with rejected scripts, reprints and shoddy articles.

It’s 2014 now, and Tharg knows his readers are mostly grown men and woman who will not accept rejected scripts and reprints, so in a bold move the Sci Fi Special has been rejigged as a platform for new writers and artists, handling classic 2000AD characters. What a great idea… in theory.

A Summer Special, like any comic, is only as good as it’s contents, and this is where the 2014 version falls down like Oscar Pistorius’ defence. First up we have a Judge Dredd tale, “Jinxed”, which just happens to be from the first female Dredd writer, namely Emma Beeby. Let's be honest, though, this fact is pretty immaterial. Emma has written the lovely “Survival Geeks” 3riller with Gordon Rennie, which I really enjoyed, but “Jinxed” is just not very good. Basically it’s almost a carbon copy of the old Strontium Dog story “A Sorry Case”, but it’s Dredd having a ton of bad luck. The saving grace is the very nice, clear art by Eion Coveney. 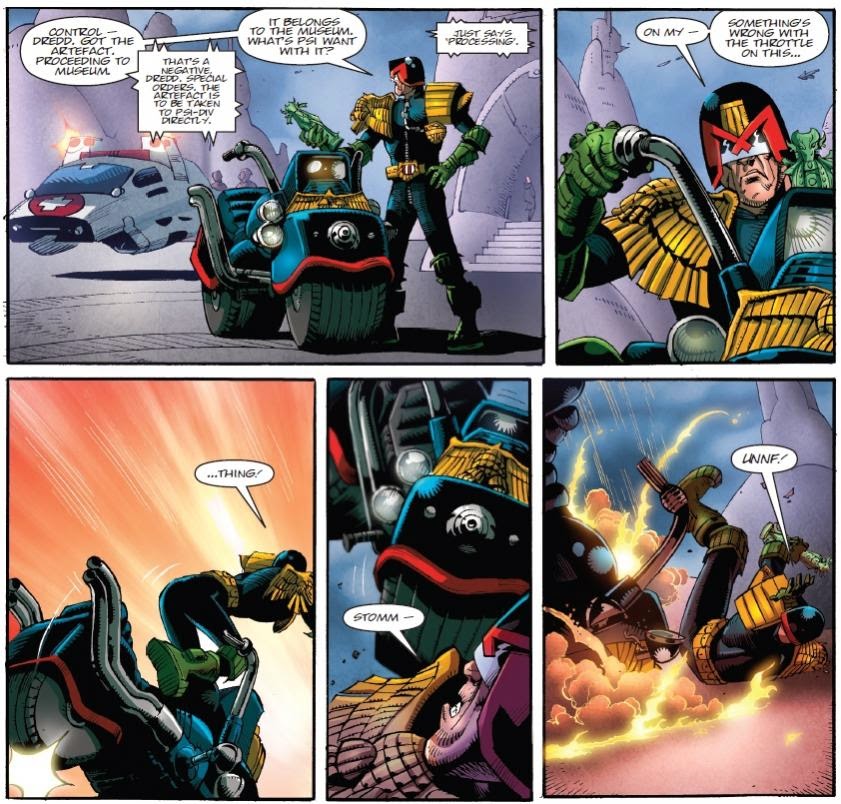 Next up we have Alec Worley, best known for “Age Of The Wolf” (which I thoroughly enjoyed) with a Robo-Hunter tale illustrated by newcomer to 2000AD Mark Simmons. Set in Sam Slade’s earlier days it has a pop at the likes of Ikea and design snobs to little effect. Basically, it’s quite a dull story with a few good lines and competent art. There’s really not much else to say, except I wanted better from Sam’s return. 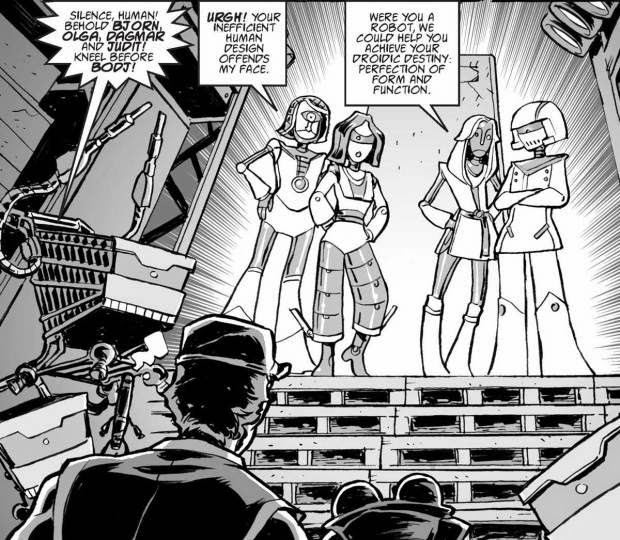 It wouldn’t be a Sci Fi Special without a Future Shock, this time by Jody LeHeup, better known for his editing work with Marvel than as a writer. Also from the Marvel stable is Artist Jefte Palo, who has illustrated plenty of superhero stuff. His unusual, modernist style works very well with the story, which is a bit of a tried and tested tale that blows it’s “surprise” ending to anyone who has ever read this sort of thing before. Nonetheless, it’s well written and quirky enough to remain in the mind after the reading, making it the best one so far.

Fan favourite Durham Red (A vampiric bounty hunter) returns next, with a cute one off tale by relatively new scripter Robert Murphy. He’s aided and abetted by another new boy Duane Redhead, a very appropriate name for a Durham Red artist. The story itself is basic and pretty entertaining, with Red doing exactly what regular readers would expect her to, and Redhead’s art fits the story well, clear and nicely laid out. It will certainly be interesting to see what these two can contribute in the future. 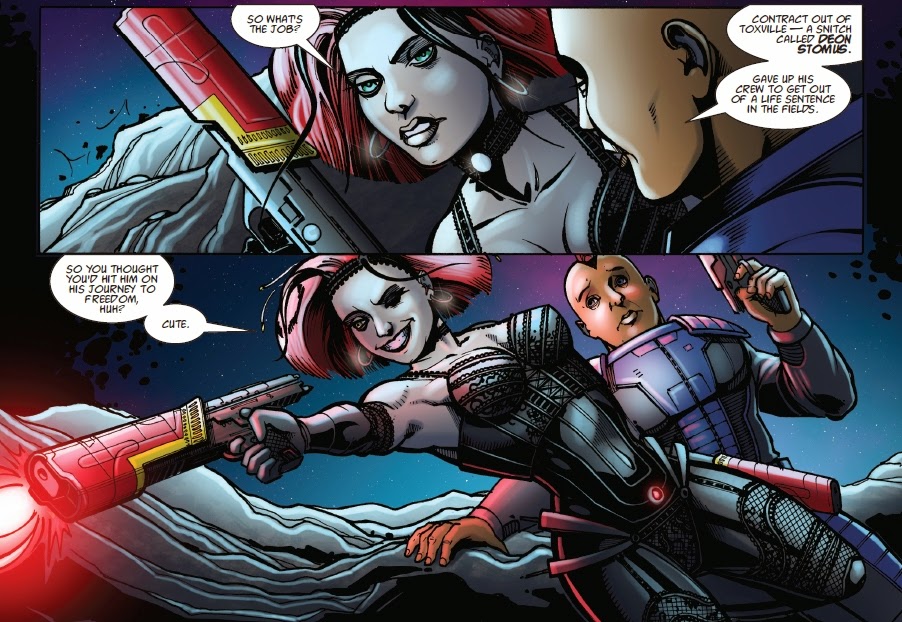 There’s a nice little treat up next as veteran Future Shock scripter (amongst other things) Arthur Wyatt gives us a blast from the past with “Orlok, Agent Of East Meg 1”, which is set during Dredd’s time as moon marshall for those that like to know their continuity. Jake Lynch provides rough but effective black and white art that gives an appropriately gritty feel to a tale of espionage and betrayal in Brit Cit. A good, solid story as expected from Wyatt, and a good introduction to a new artist. 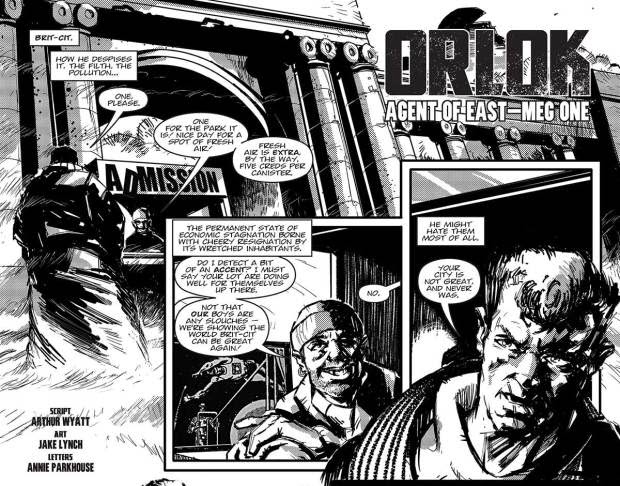 Finally, it’s time for Rogue Trooper, currently shining in his own U.S title from IDW. It’s written by Guy Adams, who entertained recently with the hilarious if overlong “Ulysses Sweet”, and for his Rogue debut he’s settled for a neat one off that provides plenty of action and jumping about whilst ensuring new readers aren’t too confused about who this blue bloke is and why is he talking to his gun. Art comes from newcomer Darren Douglas, who has done cover work before but not, I think, an internal story. In fairness he’s a great find, and his style is similar to that of Boo Cook, full of colour and action. Again, the story is a simple one, but it works well as a quick read. 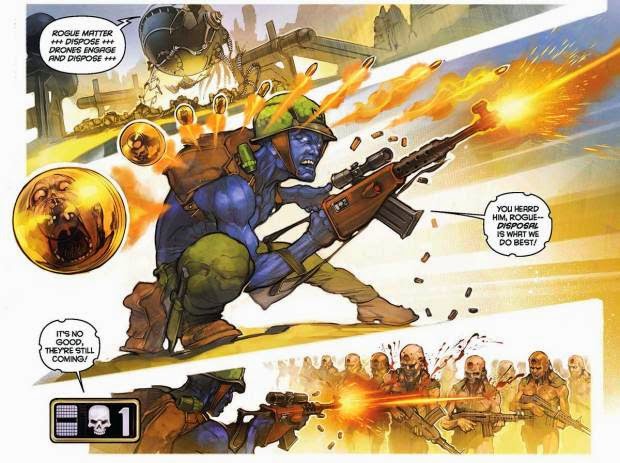 Overall, then, this is an okay release. Although it starts off pretty poorly it certainly gets better, and if a few of the scripts are found wanting there’s certainly a great deal of great art to get your teeth into. Not quite a thrill power overload.
Posted by Reviews Ed at 05:31