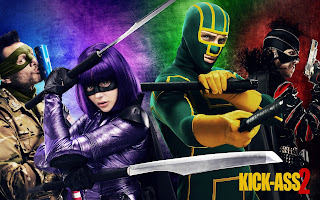 I suppose it’s only fair to start with the admission that I thoroughly enjoyed Kick Ass, both the film and the comic. Although the former diverged in plot from the latter, it kept the energy and humour (as well as the violence) of the source material and tuned out to be a fun movie (unless you read the Daily Mail).  For the sequel, director Matthew Vaughan has handed over his duties (including scripting) to relative unknown Jeff Wadlow, a bit of a risk if ever there was one. 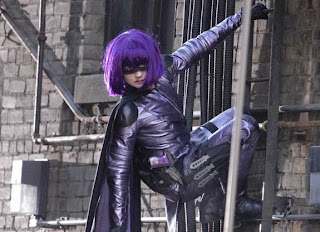 As with eth original, Kick Ass 2 centres around the titular character, a mild mannered schoolboy who likes to dress up in a wetsuit and punish bad guys, although he often gets his own ass well and truly kicked (no super powers here, folks). Dave Lizewski (Arron Taylor-Johnson,’Casualty’)  is the hero’s alter ego, and together with the pint sized powerhouse Hit Girl (Chlow Moretz, ‘Big Momma’s House 2’) he sets out to increase his limited effectiveness as a crime fighter.

All is well and good, but as ever life gets in the way. Hit Girl has to start actually attending school and being a (gulp) real girl, and the film handles the Mean Girls-esque premise much more ham fistedly than the comic did. Kick Ass, meanwhile, has tracked down other heroes inspired by him, and joins the ‘super team’ Justice Forever (fist pump). Meanwhile, Chris D’amico (Christopher Mintz Plasse, ‘Marmaduke’), the rich mobster’s kid from the first film, has decided to become the world’s first super villain. This isn’t going to end well… 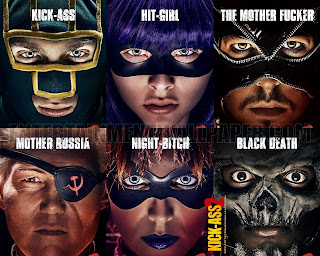 Author Mark Millar has described Kick Ass 2 as the Empire Strikes Back of the trilogy, and this is definitely more true of the comic than the film. It has it’s dark moments (one that may just blow away non comic book readers), but I wish the ending had been more true to the book, setting up as it does the beginning of part 3. That said, large swathes of the graphic novel are included, and the basic plot is pretty well stuck to. Special mention must go to Jim Carrey, who plays vigilante Colonel Stars & Stripes. It’s a shame he is refusing to promote the movie because of the violence, but I guess that means he’s one of those who only reads the bits of the script that they are in! 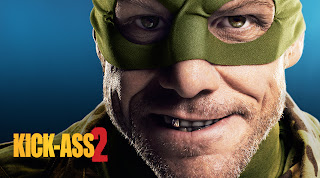 “Your enjoyment will depend a lot on whether you regard murder, mutilation and dismemberment as good, harmless fun,” says legendary prude Chris Tookey of the Daily Mail. Well, Chris, I just happen to fall into that bracket and thoroughly enjoyed it, as did the other members of the audience. It’s certainly not for everyone, but if you enjoyed the first there’s no reason not to like this one as well. More violence, more swearing and even some decent character progression, Kick Ass 2 is exactly what it is supposed to be.