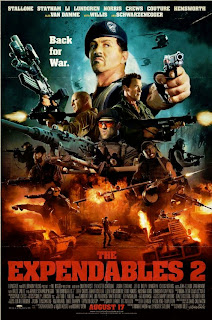 It’s pretty much a given that if you liked The Expendables then you’re gonna have a lot of fun with the sequel. It’s also pretty much of a given that if you thought the first film was a steaming pile of poo then this one isn’t going to change your mind. It doesn’t want to change your mind, because as far as it’s concerned if you didn’t like the first film it doesn’t want to know you, and nor do I. 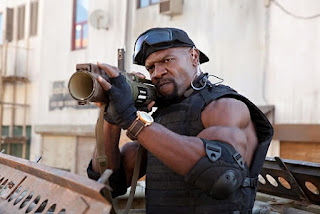 After the coming together of so many hard asses of the movie world in The Expendables, it’s only natural that a few more famous faces (and fists) have been added to the mix. What we get here is bigger roles for Bruce Willis and The Governator (well, ex-Governator now), plus the bonus of Chuck Norris (who is cool as cool can be) and Jean Claude Van Damme (that wrinkly guy from the beer adverts) as a dastardly villain who goes by the name of (and I really can’t believe they did this) - Villain. Look, if you say it with a French accent it doesn’t sound the same, so they get away with it, but only just. Also in the mix is Liam “Brother Of Thor” Hemsworth, who may as well be beaming down to a strange planet on Star Trek with a red shirt and a “Shoot Me” sign taped to his back, so obvious is his impending doom. 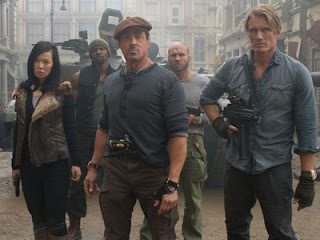 The film benefits from a straightforward, linear plot that doesn’t make the audience think too hard as they watch the fists and bullets flying (quite graphically, too). Barney Rubble, I mean Ross, and his Expendables (so THAT’S why they called it that!) start the film off with a big action bit, then Bruce Willis gets them to go off and get a briefcase from plane that’s crashed somewhere off in Eastern Europe. Piece of piss, they think, but Van Damme is lurking, setting in motion events that mean the lads have to kill lots and lots of people who despite being mercenaries would fail the marksmanship tests at the Stormtrooper school on Tatooine. Seriously, these guys would have trouble fending off an attack by barn doors. 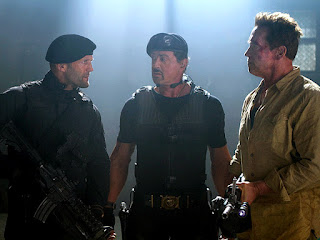 The thing is, it really doesn’t matter, as we don’t want our good guys dead, we want them to spray bullets and kill every single motherfucker in the room!  We want them to spout a few terrible quips that we will smile at regardless of how corny they are! We want them to unsubtly refer to their previous action movie careers! We want to see Rocky against Van Damme, and by all that is unholy we get all of these things plus big explosions to boot. 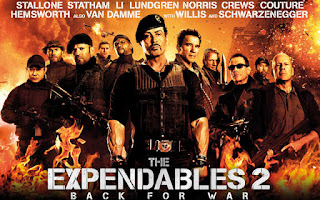 The Expendables 2 isn’t for the faint hearted. The fights are brutal, and the bullets go through people with plenty of blood splatter. Behind all this, you are always aware that this is a tongue in cheek, video game of a movie, and all the bad guys are just asking for it, the little tinkers. It’s a deliberate homage to bullet laden action movies where one man could kick an army’s ass, but pieced together with the modern film makers art and skill (and budget). All I know is I spent most of it sitting there with a big shit-eating grin on my chops, and that’s good enough for me. If The Rock isn’t in number 3 I’m going to sulk.