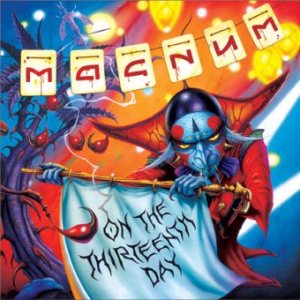 It’s quite scary to thing that 2012 is the 40th anniversary year of Magnum. As Tony Clarkin and Bob Catley were laying the foundations of what would be a classic British rock band, current drummer Harry James was at junior school, whilst bassist Al Barrow was probably still soiling nappies. Since then they’ve split up for a while (after the yawnsome “Rock Art” album), had a go at a new start with the excellent “Hard Rain” project (essentially Magnum without the name) and released 15 studio albums. “On The 13th Day” is number 16, and comes graced by an oddly subdued Rodney Matthews cover.


It’s no secret that I have been a Magnum fan since I was Bob Catley’s height (bless him), and I’ve welcomed the four post reformation albums with varying degrees of happiness. As stand alone albums they haven’t been as good as I’d hoped, although when the best bits were slapped on last years “Evolution” album it all turned out rather well, not least because the two new tracks on the compilation brought a great deal of hope for the band’s future. 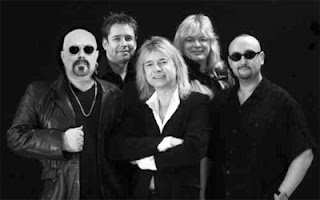 “The 13th Day” is, as ever, a mixed bag, but I can confidently say it’s my favourite of the bands recent work, probably the best since 1992’s “Sleepwalking”. There’s no mistaking the Magnum sound, and it goes without saying that Bob Catley does a sterling job on vocals throughout. Songwriter Clarkin knows to include every instrument in the mix, with his own contribution being strong but never showy. There’s only a couple of faster paced numbers here, with “So Let It Rain” seeming almost like a challenge to fans who bemoan the lack of catchy, chorus led tracks these days. Simple and repetitive, it does it’s job well, whilct “Shadow Town” adds a little more depth but still with a killer chorus hook. Elsewhere, the tracks conform more to the modern Magnum sound, but are just that bit better than previous efforts. Opener “All The Dreamers” reminds me of “That Holy Touch”, whereas “Blood Red Laughter” follows it and conjures memories of “Brand New Morning”.  This isn’t a copycat album by any means, but it does retain the riff led style of the recent stuff. 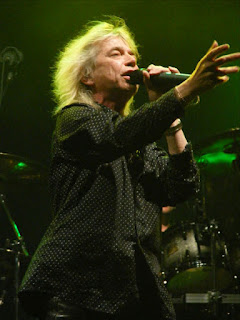 It’s not a perfect album by any means. It closes with “From Within”, a song that has a good chorus but bland verses, whereas “Dance Of The Black Tattoo” could have been a filler track on any of the last 5 releases, the best thing about it being the title. As with any Magnum album, it starts to get in your head after about 5 plays, and your favourite track will probably change week by week. Although they are unlike to ever match their mid 80s melodic rock glory years, “The 13th Day” is an album that can be held as a sign that there’s certainly life in the old dogs yet. 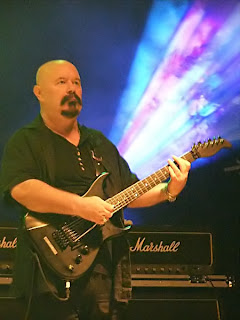