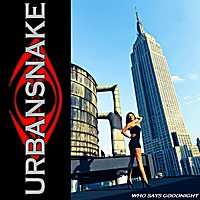 This came out from nowhere, dropping into my inbox with an ominous “ping”. There’s what seems to be a million heavy metal bands out there trying to get attention and share their music, and there’s just not enough time to listen to them all, but I clicked on the Urbansnake link to see if they were worth my time. Well, obviously they were, because you’re reading this review, but there’s more to Urbanskae than just making me sit up and take notice.

Too many metal bands these days lack what I would call heart. Sure, they make loud, heavy music with a varying success rate, but there’s often something missing, something that Metallica had in the old days, something Pantera exuded. It seems to come with new, hungry bands, getting beaten out the longer they go on, especially if they gain success and end up doing what they are told rather than what they want. Noo Yoik's Urbansnake have more heart than a butcher’s shop, more passion than Valentine’s Day and more belief than the Vatican. This, my friends, is metal as it was always supposed to be.

“Who Says Goodnight” has some very good tracks on it, to put it simply. They don’t try to be too clever, and have a sound derived from Pantera, Sabbath, Testament and all those old buggers. They fuse melody with massive, stomping riffs, and whilst you can sing along you can also headbang like a bastard to every track. Opener “Cracks Of War” really sets the tone, coming at you like an anvil on a rope, with Vinny Corvino’s vocals blasting out with utter conviction amongst a riff that will peel your flesh. If the whole album was this good, it would beget the maximum rating without a doubt, and even though it isn’t, it’s still a powerful album with plenty to like.

Obviously, I like this, and I really don’t go for a lot of new metal bands these days. Like I said, Urbansnake have that extra something to go with some cool metal tunes. There’s a decidedly retro tone to them, and they’re not trying to be the next Avenged Sevenfold, but if you like your metal to hearken back to the days when it stuck a finger up at the world and rocked with it’s cock out, Urbansnake might just be for you. Go to their site and take a listen.