Much has been said about ‘Ted’, mainly because of the, frankly hilarious, red band trailer that could lead you to expect 90 minutes of profanity laden fun. Well the film finally reaches UK screens this week and you can see for yourself that this isn’t really the case, although it’s certainly a good film nonetheless. 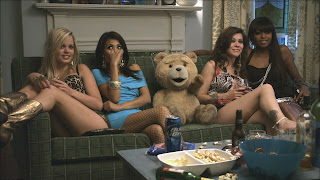 The story concerns John Bennett (Mark Wahlberg, The Funky Bunch), who makes a wish when he is a little boy that his teddy bear would be able to be alive. As it’s Christmas and all that guff, his wish is granted, and he now has a bear who walks, talks and loves everybody (and hugging). So far, so sweet, but Ted the bear grows up with John, and 25 years later they are still together, farting, swearing and smoking bongs together like only bestest buddies can. The problem is that John has a really, REALLY serious girlfriend, Lori (Mila Kunis, 2 episodes of Baywatch), who thinks that maybe it’s time he and Ted live separate lives… 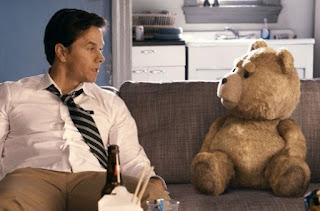 The whole thing comes from the mind of Seth MacFarlane, something that becomes apparent when he voices Ted almost exactly the same as he does Peter in Family Guy (there’s a nice in joke about this). Ted is not a well behaved bear, but he’s not a bad bear, either, and the core story of the film is much deeper than “Hey - look at the bear doing rude things! Hurr hurr hurrr!”. Once you accept that Ted is, indeed, real, you can settle down and watch a very funny movie that is also quite touching at times, despite the fact that it’s set in Boston, meaning everyone has a really annoying accent. There’s plenty of neat touches, such as a wonderful extended cameo from Sam Jones (if you don’t recognise the name, you will when you see it), another surprising one from singer Norah Jones,  and Giovanni Ribisi as a psycho who wants to buy Ted from John. 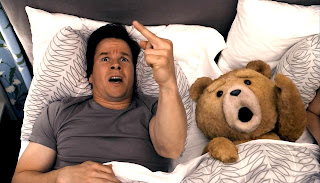 Ted is not a roller coaster of hilarity, and this ain’t like stitching four or five eps of Family Guy together. There’s an actual plot, some nice acting and a genuine emotional journey for the leads. Oh, and there’s also quite a lot of smut, drug taking, perversion, swearing and fart gags (yes got away with a 15 cert, incredibly). So it’s a funny movie, yes, but it’s also a good movie, and it goes without saying that the Family Guy crowd will love it, whilst prudes or over sensitive types will run a freakin’ mile.

www.youtube.com/watch?v=VxKfC77XAp8
Posted by Reviews Ed at 07:20