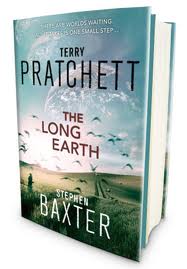 As a long time fan of Terry Pratchett and a complete newbie to Stephen Baxter, I approached “The Long Earth” with a  little bit of trepidation, a bit afraid that Baxters ‘proper’ science fiction ideas might strangle Pratchett’s creative humour. The plot itself is a wonderful concept. Imagine that there are alternate Earths, millions of them. This in itself isn’t exactly new, but what happens on ‘Step Day’ certainly is. Plans for a Step Box are circulated on the internet, allowing just about anyone to build a simple, potato powered unit that willa llow them to step to a parallel Earth, and another, and as many more as they want. One catch, though, is that iron objects cannot go through, so an old fashioned pioneer spirit is needed to explore. The point is, what would happen? Although some people cannot step for some reason, how many others would just leave to try and find something better? Who would try and take advantage, and who would try to stop it? What would YOU do?

It’s a brilliant idea, well realized by the two literary greats. It gets in your head, and even as you read, you can’t help but wonder just how such a thing would affect you personally. The main plot follows a ‘natural stepper’ called Joshua, who is one of what is a surprising number of people who don’t actually need a step box. He goes on an expedition to explore the Long Earth, to tray and find a reason for it all, or even to see if there actually is an end to all the Earths. What he discovers is both interesting and entertaining, although I really don’t want to give anything more away here, so spoilers will not be thrown at you. 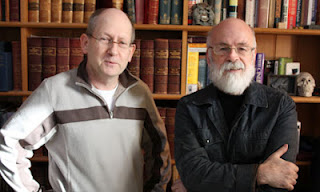 The concept is both simple and highbrow (the best kind), with a basic structure that can be taken in many, many different directions. The prose is seamless, although now and again you come across a line that could only have been put in by Pratchett, as in “ Modesty is only arrogance by stealth”. With this said, it’s not a laugh out loud book so much as a quietly smiling one. The characters are likeable when they are supposed to be, and you want to find out what’s going on as much as they do. Also, if you don’t close your eyes and try and Step yourself at least once whilst reading it you’re not human.

“The Long Earth” is the first part of a trilogy, and is not self contained. Some people may wish to wait for them all to be printed, but I’m not some people and an glad I picked it up despite the fact I feel like someone tore the last third out of it as it stops dead without any neat tying up or anything! Not as good as Pratchett’s previous Neil Gaiman collaboration “Good Omens”, but it’s a different beast, one that you should enjoy taming.