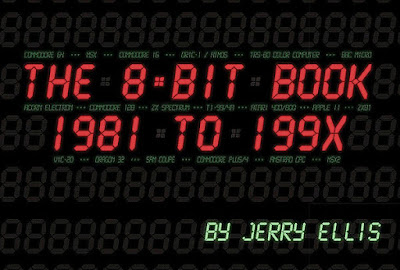 Well here I go again! A couple of weeks back I heaped praise on Jerry Ellis' current book, 'The Book Of The Game of The Film', a superb, detailed look at computer (not console) games based on films, TV shows and the like. I had so much fun with the book it seemed rude not to go back and see what Jerry did beforehand, which lead me to 'The 8 Bit Book – 1981 to 199X', which again covers a plethora of computer games, although this time without any linking theme.

The book is divided into sections covering each year of the Eighties and a final one detailing some Nineties releases for what were now obsolete systems. Those systems? Well, anyone who owned a Vic 20, ZX81BBC Micro, Apple II, Acorn Electron or the kings of the genre The ZX Spectrum and Commodore 64 will find plenty to keep them engrossed, and if you didn't own any of those systems the book may well make you scour Ebay and car boot sales (or just do the emulation thing) so you can experience what us old folk called entertainment. 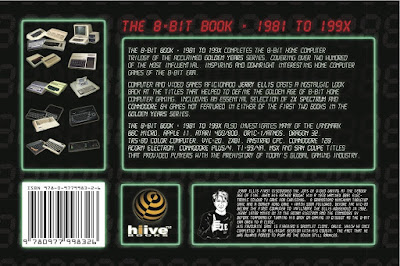 The basic (or machine code) layout is very similar to that in 'TBOTGOTF', with screenshots and covers for each game included where possible, accompanied by three paragraphs detailing the background and aim of the game concerned. It's not as immersive or humerous as the follow up, but the dedication and love for the subject matter still shines through. Mind you, I don't think anyone really needs a lengthy paragraph on how to play Pac Man (or 'Snapper' as it was), when more on the history would have been welcome instead. That said, it's in keeping with the book's format, and this format is rigidly stuck to. It's nice that Jerry was able to allow himself more freedom in the follow up. 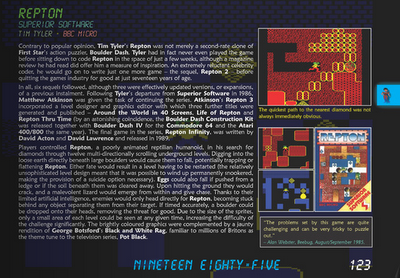 Regardless of small niggles, 'The 8 Bit Book...' is a real joy for fans of old computer games. In a nice tough the colour coded chapter markers also double as mini classic character animations, and half way through there's a rejected cover idea which is a sergeant pepper rip off containing characters from many of the games covered. Although a great picture (with accompanying details of who all the characters are) it would have been far too busy as a cover, so it's nice that the time wasn't wasted. Although not cheap at a shade under 20 quid, this is a quality, glossy paperback with 250 pages stuffed with retro goodness. Without Jerry Ellis I would not have found out about 1981s 'Softporn Adventure', or realised that I wasn't the only one who thought 'Gift From The Gods' was pretty but also pretty boring. Ideal for a quick read now and again, if you buy this and 'TBOTGOTF' you may never leave your toilet again.

Buy Direct from Golem Books
Posted by Alski at 03:08 No comments:

THE BOOK OF THE GAME OF THE FILM - Jerry Ellis 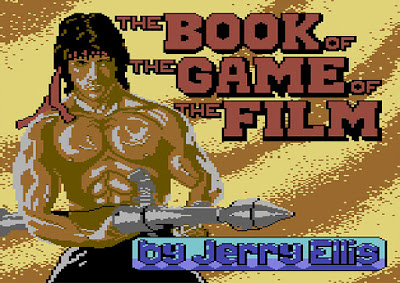 When I was a lad I was one of those who revelled in the introduction of the home computer, soon upgrading my ZX81 for a Sinclair ZX Spectrum. Naturally, I laughed at the poor fools who championed the Commodore 64, secretly worried that I had picked the wrong horse to bet on but determined to plough the furrow I had chosen. Among the ridiculous amount of games on those machines and many others were movie tie ins, and I fonly remember the likes of Robocop, Cobra and Batman amongst others. Author and general fountain of knowledge Jerry Ellis remembers them, too, but he remembers oh, so much more, and in his book he shares it with us. 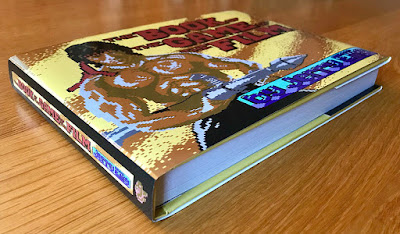 The Book Of The Game Of The Film is, as you'd expect, a look at computer (not console) games based on films, but it's not that simple. Firstly, although the main glut of the book deals in film based games, it also has sections for TV, book and comic based games, so there's a bit more than expected. Secondly, and best, this isn't a dry look at the games concerned, wibbling on about graphics and technical issues, or even a reviews book. TBOFGOTF is, above all, fun to read. Yes! Fun! 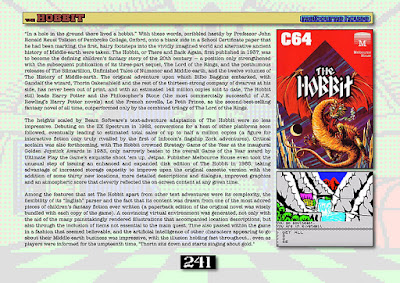 Although the games themselves are detailed, naturally, we also get a decent slab of information on the film, book, programme or comic character it's based on, often containing genuinely interesting facts with which to bore your (soon to be ex) friends down the pub. Because of this book, I now know which dirty film was the highest grossing Canadian film for the twenty years before My Big Fat Greek Wedding came along, and I also know just why Bruce Lee told people to be 'Like water'. Do you know these things? Do you care? Well, I both know them and care, but I didn't know them (or care, really) before I got this book. If, liek me, you're a keen quizzer who loves old computer games you really are in f or a treat. 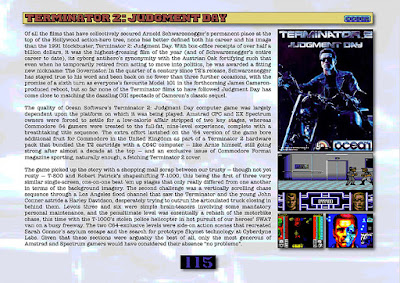 The books layout is nice and simple, with each game given exactly the same treatment and space - no favourites here! Although it's not in alphabetical order there is an index for quick referencing of your fondly remembered titles. It helped me realize that I was remembering correctly that Battle Of The Planets not only had zero to do with the cartoon but also offered a prize for the highest score. 300 pages thick with glossy pages and a slipcover, it's certainly well made, although the A5 size will mean some squinting for us oldies. Limited to 250 copies (at least initially) it can be your for under £30 including postage, and whilst I initially balked at the price I am very glad I took the plunge, and if you used to spend countless hours watching games load of a cassette you will be too.