"The Rise & Fall Of A White Collar Hooligan - DVD Review 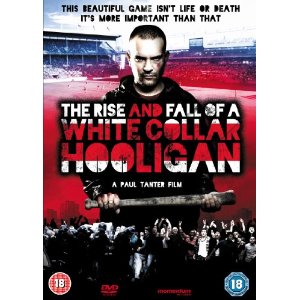 The "Geezer" film has become a staple of the British Film Industry in the last 15 years or so, popularized by the likes of Guy Ritchgie and then carried on in films dealing with either football hooliganism, violent crime, or both.

"The Rise & Fall Of A White Collar Hooligan" doesn't offer us much new, to be honest, but does it's job as well as can be expected. We get your typical footie loving hooligan Mike, played very well by Nick Nevern, who can't get a job in these disparate times etc etc. He's fixed up by fellow footie battler Eddie (an excellent turn from Simom "Jack Falls" Phillips) who introduces him to the world of organized credit card fraud. From here on, we follow his crime career with plenty of swearing and some, but not too much, violence.

It's a good film that builds its characters well, using two of the better up and coming Geezer actors of recent years. the old school is represented by Billy Murray, playing his usual type, but the main focus is on the two leads, who carry the film with style. Oddly, the football element does not sit with the rest of the film, and as it doesn't advance either plot or character could be erased without any detrimental effect to the film as a whole. So, not up there with "Rise Of The Foot Soldier", but worth your time if that's your idea of a good night in.... geezer!