ROCK OF AGES - THE MOVIE 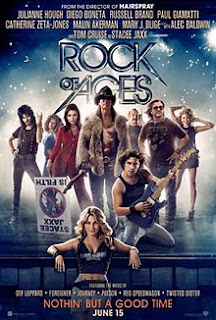 Right… this really should have been shit, to be honest. Mamma Mia for Journey fans, with Tom bloody Cruise of all people pretending to be a rock god. Okay, so it’s based on a successful stage musical, but that doesn’t guarantee anything. This isn’t West Side Story, although to be fair West Side Story would have been improved with a Twisted Sister Song or two.

It certainly gets off to a dodgy start, as Sherrie Christian (Julianne Hough, Footloose) is bussing her way to Los Angeles and starts signing Night Ranger’s “Sister Christian”. It’s horribly cheesy and there were more than a few laughs through the cinema, one of them mine as I prepared for a very long two hours to drag by as my favourite musical genre was ripped apart and stamped on. Bollcoks…

Then, as soon as the horrible bus ride is over, it all gets better! Sherrie reaches L.A, falls in love with Drew Bolie (Diego Boneta, 90210), and gets a job at an infamous club The Bourbon Room. Thrust into the mix are club owner Dennis Dupree (Alec Baldwin, lots of stuff) and his sidekick Lonny (Russell Brand, who can’t decide if he’s from London or Birmingham), along with genuine rock god Stacee Jaxx (some bloke called Tom Cruise) who is to play a gig there. Along for the ride we have anti rock shrew Patricia Whitmore (Catherine Zeta Jones, Darling Buds Of May), who wants to close the club down for good. 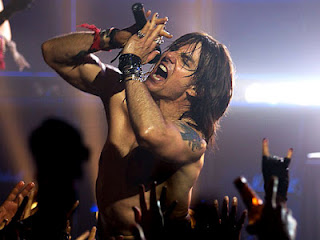 Okay, so the plot isn’t exactly Shakespeare, or even the bloke that used to clean Shakespeare’s toilets (Mr Ploppy), but it’s really not the point. This, my friends, is all about the music. We get songs by Journey, Def Leppard, Twisted Sister, Pat Benatar, Bon Jovi, Poison, Whitesnake and more, all performed by the cast. Tom Cruise does a fine job on vocals, as does everyone else, and certain tracks really do bring a tear to the eye as the lyrics match the on screen feelings. I’m just an old softie, really. 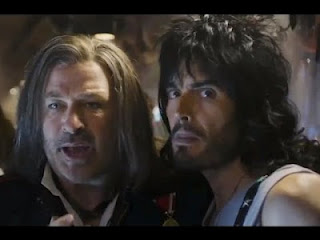 The two leads are both charming and very sexy, Cruise plays up the rock god label with total style and not a few laughs, whilst Brand and Baldwin get the best moment in the whole movie, which shall not be spoiled here. Seriously, you’ll choke on your popcorn. There’s even a spot for Mary J Blige as a strip club owner, and she, too, gets her chance to exercise some great pipes as she belts out Journey’s “Any Way You Want It”. 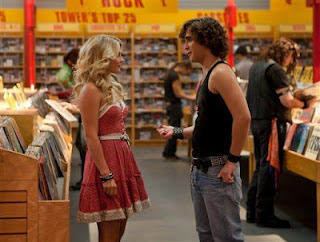 Basically, Rock Of Ages should not be any good, but like Mamma Mia before it, it’s brilliant if you have a genuine love of the music. Me, I am a total whore for 80s soft rock and I grinned almost all the way through. If I’d had a few beers beforehand I would have been singing along as well, so I’m glad I didn’t.  If you remember Dave Lee Roth, REO Speedwagon and even Starship with fondness, perhaps still have their tracks on the iPod (Ido), then you will love this movie (and the stage musical, natch). All together now… don’t want nothin’, but a goooooood tiiime!!! (woo!)
Posted by Reviews Ed at 15:56