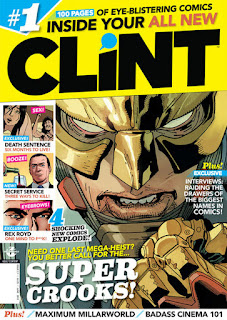 These days it can feel a bit like a guilty confessional to tell other comic creators you like Mark Millar. Whilst he seems to be quite the messiah (or at the least a very naughty boy) to your average comics reader, people in the small press industry seem to generally think he’s a cross between Simon Cowell and a wart on the end of David Cameron’s cock. Personally, I have rarely read anything by him that I haven’t enjoyed, so his anthology comic CLiNT has been right up my dark alleyway.

After a dodgy start with some of the worst text articles known to man, CLiNT settled down pretty well as a showcase for Millar’s own work and those of his friends. We got Jonathan Ross’ over wordy but still worth a read “Turf”, a short story by Jimmy Carr, the likes of “Kick Ass 2”, “Superior” and “Nemesis” (all brilliant) from Millar, and steaming turd squeezed out by Frakie Boyle called “Rex Royd”. There were others, and aside from said turd they were all good or better. CLiNT eventually decided that, yes, it was a comic, and started to eject the childish articles in favour of more strip content. Life was good, I could buy it in WH Smiths, and then everything came to a natural close and we now have a relaunch.

So this is CLiNT volume 2, first issue, and to be honest it’s nothing more than an excuse to put the “Issue 1” legend on the cover and draw in, hopefully, new readers. There’s complete first issues of Millar’s two new babies, “Supercrooks” and “Secret Service”. The former is a nifty little tale in four parts that details a bunch of likable super criminals fed up of being nicked by U.S heroes. When one of their friends get in some deep shit they head to Spain to escape the capes and nick a fortune of a retired criminal who is probably the most feared man in their world. It’s set up as a kind of mini “Ocean’s Eleven” but with superpowers, and does a very good job. Naturally, it’s already been picked up as a film (one of those “Why has no one thought of it before” things, really), but you get the feeling that Millar is nearing the point where his used condoms would be optioned by Hollywood. Either way, I’ve read the first three issues of this, and would recommend it, especially if you don’t have regular access to dedicated comic shops. “Secret Service” sees the joining of Millar with comics legend Dave “Watchmen” Gibbons. It is now mandatory to always mention the “W” word when talking about Dave, because for some reason he’s a lot more well known for that than his stint as Tornado editor “Big E”, which he probably still has nightmares about. Anyway, this one revolves around a high up spy fella who recruits his wayward nephew into the service. Of course, there will be more, but after two issues (the first of which is in CLiNT) we’ve sort of got that and the fact that a terrorist organisation is kidnapping cast members from classic sci fi films and TV series. The first six pages are excellent, and the rest looks set to follow the trend. Oh, and the art is lovely, but what else wopuld you expect from Dave “Big E” Gibbons…

The other new strip is “Death Sentence”, which isn’t too heavy on explanation, but the premise seems to be that there’s a disease people get that gives them a short time to live but also grants a superpower for that time. This, my friends, is a Cool Idea, so let’s hope it continues to be a intriguing as the reasonably short section we get in this issue. Lurking at the bottom of the barrel and eating it’s own shit is “Rex Royd”, which is as pants as ever, but we’ll live with it until Frankie Boyle is murdered by an infinite number of monkeys who can’t come up with anything as shit as he can.

Add to this an interview with Millar and another with a real life costumed vigilante who actually calls himself Clint after the mag (and seems like a really cool guy, against all odds), and you have an incredibly good value magazine that will bolster it’s rep by giving us a “Hit Girl” strip (again by Millar) very soon. Enjoyment is very much dependant on your tolerance for Mark Millar, but it’s his bloody comic so he can do what he wants. If you have only read and enjoyed “Kick Ass” at the least, though, CLiNT is well worth a punt.

http://titanmagazines.com/t/clint/
Posted by Reviews Ed at 03:21