The Levellers - "Static On The Airwaves" 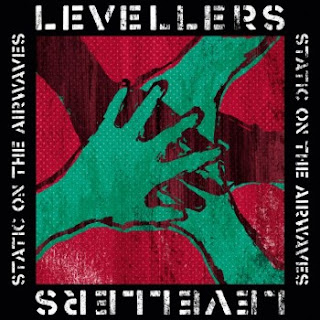 It’s been 22 odd years for The Levellers, a band who irritate some people because they basically look like a bunch of travellers, and delight other with their political, environmentally conscious yet catchy repertoire.  Regardless of their politics or appearance, there are few people who can resist tapping a foot to the likes of “Beautiful Day”, or appreciating the solemn power of “Hope Street”, and in this lies then band’s true strength: the ability to rise above what they are perceived as.

I have to admit that I’ve not been bowled over by recent Levellers albums, although there certainly have been plenty of good tracks scattered amongst them. “Static On The Airwaves” sees a return to what I consider the core strengths of the band, with gritty folk rock spiced up with aggressive fiddle and well placed guitars, tied together with some fantastic lyrics. Most importantly, it’s a very catchy album, with none of the dirgy tracks that have dogged them for a while now.

The track that will get everyone hopping is the single “Truth Is”, which is about as traditional a Levellers song as you will ever get, with a frantic jig on the fiddle precluding a well paced, lively anthem that will see live audiences drunkenly carousing round in circles, waving cider bottles about for all their worth. My personal favourite, however, is the short “Forgotten Towns”. It consists of just Mark Chadwick’s vocals backed by Jonathan Sevink on fiddle, and it’s a very powerful portrait of Britain’s ailing high streets. Elsewhere they have a go at online addiction, America (for a change) and, of course, war, in the beautiful album closer “The Recruiting Sergeant”, itself a modern reworking of the Black Watch anthem “Twa Recruitin Sergeants”.

I have to say that I have enjoyed this Levellers album more than any other from the last decade, and am looking forward to hearing some of the new tracks live. It’s an album of peaks and troughs, but whilst the peaks are sky high, the troughs still reach for that sky. Angry and politically aware they may be, but The Levellers haven’t yet forgotten how to write a decent tune. In the end, we’re all of the fiddle…

www,levellers.co.uk/
Posted by Reviews Ed at 04:00