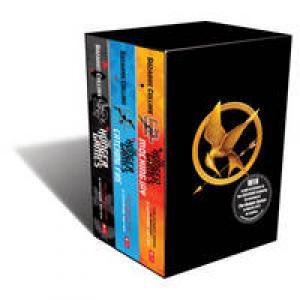 I remember seeing these in The Works some time back, and thinking that they were probably for kids, not a big, bad adult like myself. Then the film was announced, and it seemed that I was right, with Tweens being the target group, the sort of people who think that vampires sparkle. The film got plenty of rave reports, and one Wednesday I agreed to take a look, and bugger me if I didn’t think it was pretty darned good! My sister kept telling me that the books were even better, and as she’s often right about this sort of thing I gave them a go.

The plot, for the uninitiated, goes something like this: It is North America, sometime in the future. Shit has firmly hit the fan, and the people who have survived (whatever it was is never explained) live in 13 districts, all servicing the Capital, where the privileged live in luxury. 75 years ago the districts rebelled, and as a punishment the Capital started off the titular games, where each year a boy and a girl are chosen from each district (except 13 which was totally smushed in the rebellion) and made to fight to the death, all live on TV. Katniss Everdeen is the heroine, a 16 year old who is chosen to fight for District 12. I’m not going to spoil anything for those who are Hunger Games newbies, but it’s a brilliant story over 3 books, surpassing the original Hunger Games basic plot and taking flight all over the place. What we get is a very real world, ruled by some bastardy people, and you will be booing out loud as you read, although there’s also cheering when the Capitol is outwitted or just plain thumped in the metaphorical face.

The Hunger Games is incredibly well written, and I personally devoured all three volumes in under a week. There are those who say it’s just a rip off of the Japanese movie “Battle Royale”, but these people are stupid and should be locked in a closet and ignored. The whole point is that this is a trilogy, and if you’ve seen the film you really should read them to find out what happens next, and also because the world is so much more vibrant and real in the books (even though the film did an admirable job). I was genuinely choked up at times, as with the whole thing being narrated by Katniss in the present tense you really get to know her and feel her anguish and passion throughout. If I’m honest, the third book loses a little steam, but it does wrap things up very neatly and without any holes or flaws.

So, not just for kids or teenagers, The Hunger Games is a sterling piece of fiction for all fans of exciting adventure or speculative sci-fi. Suzanne Collins draws the reader into a very real world, with real consequences and no guarantee of any characters making it to the end with all their bits intact, or even a pulse. Highly recommended.
Posted by Reviews Ed at 08:51