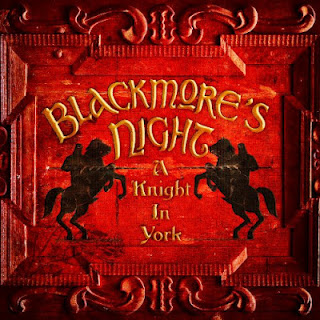 So far, I’ve managed to avoid Blackmore’s Night, mainly because I just didn’t want to hear Ritchie Blackmore doing Medieval Fayre music, and partly because part of me suspected that Candice Night had bewitched him into turning his back on rock music. Anyway, when someone offers a free DVD it’s hard to say no, so I took a deep breath and broke my Blackmore’s Knight duck with a bang.
The very first thing that sort of put me off this whole enterprise was the fact that the musicians are listed as Earl Gray Of Chimay, Bard David Of Larchmont, Squire Malcolm Of Lumley, Gypsy Rose and Minstrel Albert. Just reading this gave me a headache, as it smacks of being hippies for the sake of it, although I noticed that Night and Blackmore themselves didn’t have a daft suffix or prefix in sight. It’s good to be the King, eh? 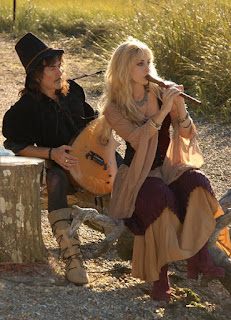 Okay, so this is the point where I carry on hating, right? Where I say the whole thing is just a bunch of drippy, hippy nonsense? Well, it sort of is, but that’s really to be expected with names like that, straw on the stage and a hurdy-gurdy. For something I really should turn my nose up at, I seem to have watched this DVD quite a lot over the past few days. I’m watching it now, and I may well watch it later. The thing is… it’s really good. Okay, so it’s not rock music, admittedly, but that Candice Night has a superb voice on her, and Richie does get to throw in a few guitar/mandolin solos every so often, even going so far as to look like his old gurning self. Dammit, he looks happy, so he may not actually be bewitched. 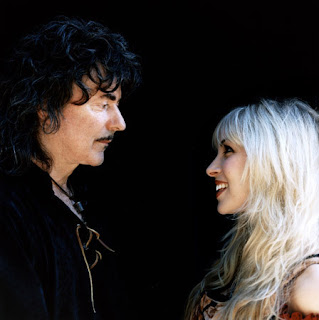 There’s a mega low point when they start doing the refrain from “Bad Romance” and a roadie comes on as “Lady Ga Ga” - it’s even ore cringeworthy than the costumes, the straw and the two fake boulders at the front of the stage, but I’m sure they found it fun. The packed crowd in York seem to be enjoying the whole thing, and I have to say I would have liked to be there myself. Blackmore’s Night make music to chill out to, with some lovely intricacies, plenty of bounce when needed and vocals that carry across any room to perk the interest of anyone in earshot. As a DVD it’s simple stuff with no frills to the performance, but none are needed. If, like me, you’ve avoided this lot but actually quite like a bit of folk rock, then this is a great jumping off point. Egads! Forsooth! Etc etc…
Posted by Reviews Ed at 02:31