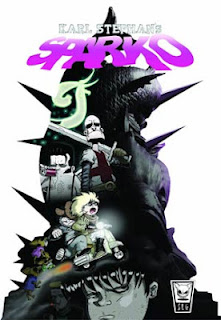 Sparko is quite a thing, coming across as the weird, unappreciated love child of Jamie Hewlett, Neil Gaiman and Tim Burton. No, I don’t know how three men can have a love child, but maybe that was why it was unappreciated. Fuck, I’m just rambling here, and if you want a paternity test go see Jeremy Kyle. Oh, actually, whilst I think about it, the mother could have been Lenore, the little dead girl, but that would just be weird, right? 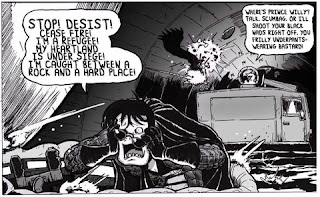 Anyway. On to Sparko, the creation of Karl Stephan, a person who might just be the creator you’ve been looking for. When he contacted me and asked if I would review his graphic novel, I certainly wasn’t expecting 170+ pages of creativity, more like a few dozen pages of poo that I could smarmily make fun of. I have only seen the online version, but rest assured if you like your comics bound (with gags), it’s available by clicking on the magic Amazon link at the bottom of the page.

The first thing that hits you about Sparko is the art style, which really does bring Jamie Hewlett to mind, crossed with Roman Dirge (Lenore). Although black and white, it’s incredibly sharp with nice detail and the occasional background gag. It suit’s the story perfectly, though, and that’s just fine and dandy (or Beano, if you must) with me. 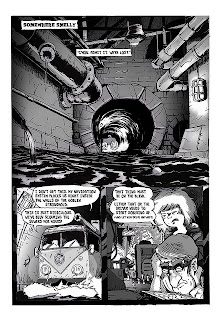 The story itself is sometimes a bit convoluted but always fun. On the surface we have forgotten rock star Norman, who has been moping around for years after the accidental death of his girlfriend, swapping sex drugs and rock and roll for, well, drugs. He gets embroiled in a takeover bid in the  hidden under-world of London that’s sort of like Gaiman’s Neverwhere, where London’s history lives on, never forgotten but mostly misremembered. His lot is thrown in with that of a spunk filled (not like that, dirty boy!) tearaway called Belle, who was in our London to steal a relic so that the Queen’s son, who has been kidnapped….. Oh, bugger this. If I go on it will just spoil all the mental surprises, so I’ll just say it’s twisty, turny, topsy, turvy and very tight. 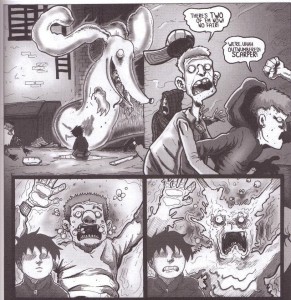 The sense of humour is pitched just right, with cultural references sneaking in but not getting in the way, plus tons of snappy, funny dialogue. In amongst all the daftness and high adventure, there’s still time to tell Norman’s sad story as he tries to get over the girl he once lost. Although I was a bit daunted by the length at first (it was rather near bed time), I read this in one sitting because I just had to know what would happen, and also it was fun. This is the sort of thing that could be serialized in the Judge Dredd Megazine and make a lot of fans, but until that happens it is something that you really should check out, because some gems are not meant to stay hidden.