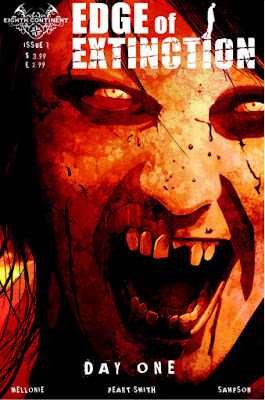 Being a comics creator outside of established publishers is not an easy life. There's plenty of great titles out there that have had the heart and soul of their creators poured into them, and if we're honset there's a fair bit of shite as well - just like anything, really. Let's just say that doing your own comic isn't generally a way to fame and fortune, but it's the best way to get your vision out there, and deeply satisfying if you're the one creating it.

Edge Of Extinction is an interesting one. Originally started in 2015, it had a rather large break between issue one and two due to the personal circumstances of writer Baden James Mellonie (which he candidly writes about in issue 2). Indie books traditionally have a slow rate of publication (for good reason), and when the series returned in July 2018 it was with intent, and issue 3 followed a mere 9 months later, with issue 4 promised any day now. Yeah, it's a slow burn, but as I say it's pretty standard. So what's it like? 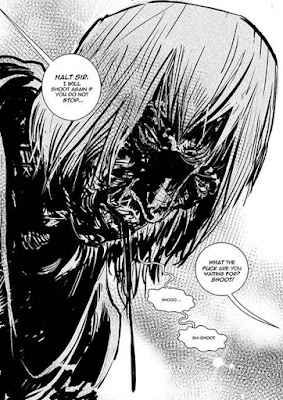 I'm not normally a big horror fan, although I've certainly enjoyed my fair share. What I mean, I suppose, is I don't tend to track it down, but will happily give it a go if it comes my way. I loved The Walking Dead, and found Crossed to be a marvellously guilty pleasure, so zombies aren't a literary turn off if done well. As you may have guessed, EOE is a zombie book, but as it's by UK creators it's set firmly in the UK, in Bedford of all places. with locations taken from real life. The three issues don't fart about and we soon get to the zombies without yet having a clue why it's all happening. We get the standard group of survivors trying to stay alive and work out what's going on, mainly because that's how stories work. As I read them all in one go I got to enjoy them as a free flowing narrative, and I have to say I'm really enjoying what the lads have done so far. Nothing is rushed, with the story given priority over gratuitous corpse reanimation, and in issue three there's a real gut punch of a scene that is handled really well. 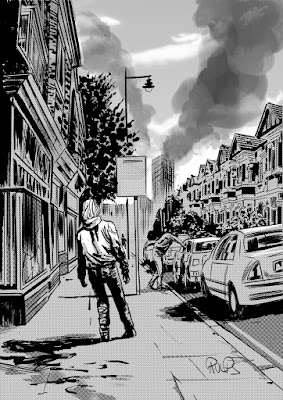 The art is handled by Paul Peart-Smith, who contributed some art to 2000AD in the 90s and has done a fair bit of work since, including curating the history of black comics exhibitiion "Black Power" as well as Horrible Histories and more. His art in issue 1 is, well, a bit scratchy if I'm honest. It does the job and is in no way offputting, but it didn't quite grab me. Fast forward to issue 2 and it all comes together much more, as there seems to be that bit more thought put into it and it works really well, improving even more for issue 3. At this point I can safely say I'm a fan.

The comic itself is very solid, with thick covers and pages that use thick paper that will stand up to a marmite stain or two (sorry guys, I like to eat crumpets whilst reading comics). For a £2.99 cover price it's remarkably well made, and this is only made better by the fact that variant covers are available by the likes of Ryan Brown (top man, top artist, top drinker), Max Millgate (top Rush fan) and more. Basically, everything about EOE shouts "Quality Product" which is always good to see, especially when it's backed up by a story worth reading. 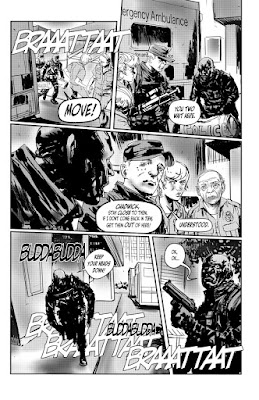 Obviously, if you dislike zombie comics you may not get much out of this. The Walking Dead and 28 Days Later are obvious paralels, but EOE is it's own beast rather than anyone's pale imitation. The absolute best thing I can say about it is that I want to see what happens next. If you don't feel that way about a comic series then it's failed, and EOE issue 3 ends in a way that had me quite pissed off that iuuse 4 wasn't at the bottom of the pile, hissing and biting and daring me to read it. So if you want to read a really good horror comic and support enthusiastic, talented comic creators you should certainly checkout Edge of Extinction, because if you don't the zombies'll get ya!