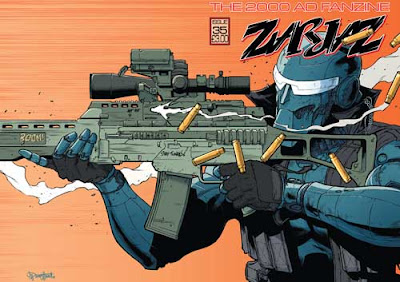 Borag Thungg fellow 2000AD fans, it's that time again, as a new issue of Zarjaz is lovingly crafted and stuffed so full of thrills it glows in the dark. Featuring a superb cover by 2000AD John Davis Hunt featuring everyone's favourite softly spoken sniper it looks great, but what's inside...

The first strip sees the cover star getting a short and sweet four pager, as Joe Pineapples gets to play at 'D1VORC3'. Zarjaz stalwart Richmond clements delivers a tight script with a nice little twist on the final page, whilst Alex Paterson's visuals are excellent. 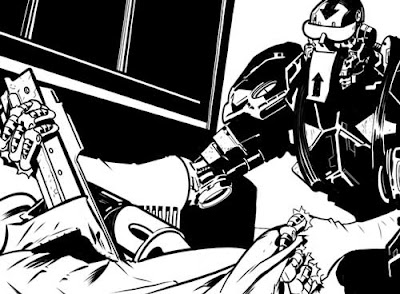 Next up, as ever, it's ol' stony face himself, in Dave Hailwood's homage to cheap monster movies, as Judge Dredd tackles, of all things, a giant slug in the VERY appropriately titled 'Judge Dredd Vs The Slug'. Featuring some really nice visuals from Brett Burbridge, the light hearted story is a decent slice of Dredd that's fun and features a couple of nice homages to classic trashy movies. Although the final panel, for me, doesn't work at all, I really enjoyed this one.

Unusually for Zarjaz there's a two parter this issue that features Mr Blue Skin, the ever popular Rogue Trooper. Daniel Whiston has crafted a time traveling tale that sees Rogue going back to the WW1 trenches to, um kill some mutants, or not, or something else. I've read this a few times now and I still don't understand the plot, genuinely. The basic idea is a fun one, and Michael Walters excels on art duties, but the end result doesn't satisfy like it should. 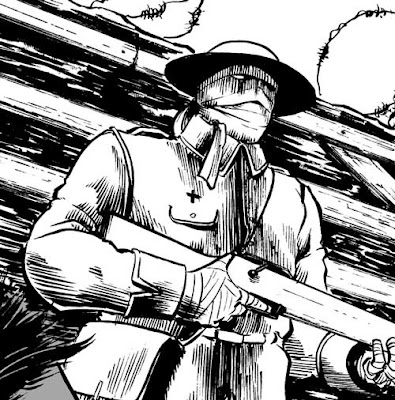 It's the return of a very old character as we get to the middle of the mag, as The Visible Man features in Matt Sharp's 'Comic Rock' revival, suggested by the classic and much covered 'Blue Moon'. Short (two pages), sharp and amusing, it's a nice break that's handled very well by artist Michael Walters. 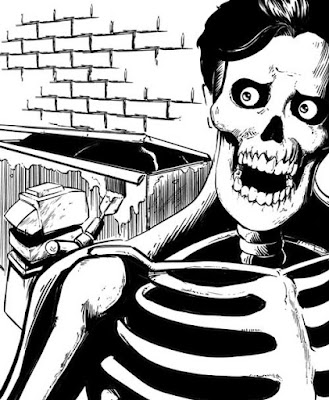 Next up we have 'Feat Of Clay'. In fact, this issue features the third and fourth part of John Farrelly's Harlem Heroes prequel, which I was looking forward to after gushing over the first two last issue. The story continues as young John Clay starts his Aeroball career and events get even more dramatic. Once again it's the issue's highlight, compelling and well told with decent art that excels during action sequences. the only downside, once again, is the wait until we get the final parts. 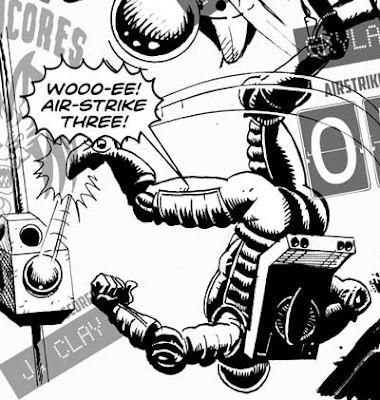 The last strip this issue sees another old school character, but perhaps one people never expected to see again, as the greedy space monster Bonjo (he's from beyond the stars, don't ya know) returns to cause havoc. Although more brainless than ever (we last saw his brain being stepped on by M.A.C.H Aardvark), Bonjo is stopped in his rampage by none other than Captain Klep and Dash Decent, who's shrink rays set off a very unusual, very topical and very funny course of events. Matt Sharp's script is spot on, making me giggle a good few times, whilst Ed Doyle provides perfect art that captures the story's cartoony vibe. 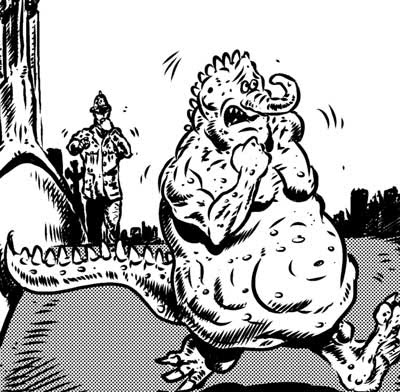 All in all, another good issue, long may it contunue