ROY OF THE ROVERS: THE 50s - COLLECTED EDITION REVIEW 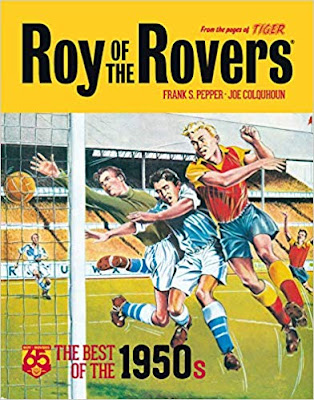 Goold old Roy! There's a phrase that you'll know very well if, like me, you followed the golden haired hotshot's adventures over the years. Publisher Rebellion have scored a credible brace by not only giving us new adventures (see my reviews elsewhere) but also chucking out some collections of Roy's earlier adventures, starting with the very genesis of the character in the 1950s.

Roy Of The Rovers was given the esteemed front (and back) cover spot in Tiger weekly ('The Sport & Adventure Picture Story Weekly'), a comic aimed at boys who wanted to read thrilling tales of heroism and footie. Debuting in September 1954, Roy was popular with readers, eventually getting his own comic, but that's for another day. Although created by Frank Pepper, he only wrote a handful of strips at the beginning, and the remainder of the 140 pages are supplied by UK comic legend Joe Colquhoun, for some reason supplying art and script as Stewart Colwyn. It has to be said that he does a fine job of making the reader want to find out what happens next after the two page weekly instalment, and he sets up many of the tropes that would roccur in the strip for the next few decades. Although the art is very of it's time, not like Joe's beautiful 70s work, it's decent enough with plenty of nice detail throughout as he gets into it. 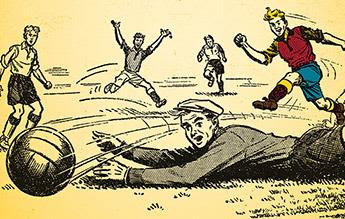 Story wise, we follow Roy as he joins the legendary Melchester Rovers as a lad, going from the reserves into the first team through sheer talent and determination. We meet team mate Blackie Gray, who is a constant throughout the strip's history, and a few others readers from the 70s and 80s will recognise. Each instalment is two pages long, consisting of a colour front page and black & white rear page, never failing to whet the appetite for the next one. Naturally, much of it involves Roy battling nasty types trying to hinder his career and shining on the pitch, often scoring the traditional last-kick-of-the-game goal. My only rea gripe is a story is set up that culminates in a trip to South America with the team, but there's then three months of strips that are cut out, with a new thread starting when they return. I can only assume there was missing material, but it's vexing! I assume Roy gets kidnapped whilst abroad, as this happened quite regularly. 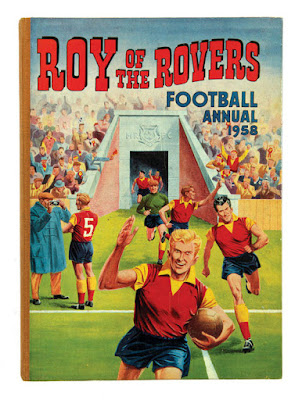 This is the first time I've had the chance to experience Roy's early days in print, and I thoroughly enjoyed it throughout. There's nothing big or clever about this type of strip, but if well done it's just a joy to read, with thrills and spills and plots that vary the sublime to the ridiculous. If, like me, you enjoyed Roy's later years in his own comic, then I can guarantee you'll enjoy this, and whilst you're at it buy Williams and Willsher's new Roy stuff for the grandkids.

ROY OF THE ROVERS: BEST OF THE 50's IS RELEASED JULY 25TH BY REBELLION, WITH THE BEST OF THE 60's FOLLOWING 22ND AUGUST