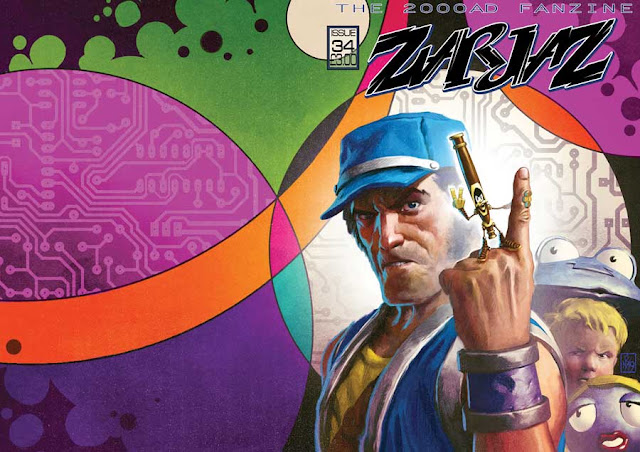 Remember that little tingle excitement that you used to get when 2000AD would drop through the letterbox? Me, I don't get that tingle any more, although I still thoroughly enjoy the prog each week. The thing is, the tingle has returned (new Star Wars title? Return of The Tingle? Naaah...), and it's connected to the one and only ZARJAZ, the long running 2000AD fanzine. Each issue is guaranteed to feature original takes on classic characters and a few surprises on top, starting this issue with a cracking cover by 2000AD artist Neil Roberts as seen above.

The cover leads the reader into the opening story, a rare fanzine outing for everone's favourite grumpy Robo Hunter, Sam Slade. 'Guy, Robot' sees Sam, Hoagy and Stogie up against new robo hunting rival, a robot called Guy (hence the painful title pun). Alan Holloway's script captures the personalities of the main characters very well, as well as the humour of the original strip, whilst Denis Vermesse's art pushes Sam and co even more towards noire with great flair and detail. A solid story with a classic payoff, this should keep fans very happy. 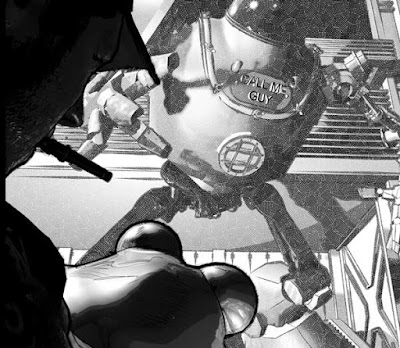 Dredd crops up in two stories, namely 'Double or Nothing' and 'Iron Chief''. In the former, Mega City gamblers find something new to wager on - Judges, whilst the latter sees some criminal get more than they bargained for when they steal from Justice Department. Both stories are nice, neat one shots, with 'Double Or Nothing' being the more humerous. The art, from Jack Davies and Tom Bonin respectively, is of a good standard, suiting Mike Lynch and Santiago Mayaud's scripts down to the ground. Zarjaz always gives good Dredd, and these are no exception.

Perhaps the standout story in this issue is 'Harlem Heroes: Feat Of Clay', written and drawn by John Farrelly. Iit's a six part story to be serialized in Zarjaz, with the first two parts in this issue. The story is a prequel, concerning young John Clay, later to be known as Giant,  his introduction to Aeroball and his rough family life. As a Harlem Heroes (original series) fan I was looking forward to this and it doesn't disappoint in any way. As any good serial should, each part left me wanting to read the next one, and this is an instance where the long gap bewteen Zarjaz isssues is gonna grate. Great script, great art and a great contribution, this is going to be popular. 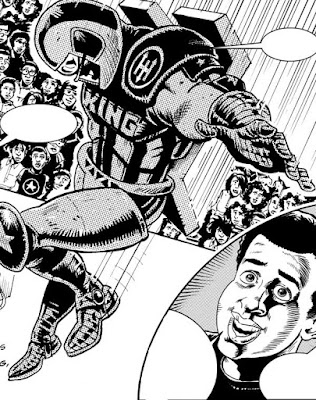 In a sideways move but a welcome one, there's also a text story in this issue, featuring Judge Anderson. I'm not generally a fan of text stories featuring comic strip characters but a good tale is a good tale, and Matt Sharp provides a rather decent, dark story here. Aided by some nice illustrations from Gail Nedry, 'Tom's Diner' breaks up the issue very well, adding a slab of minutes onto the reading time if savoured properly. 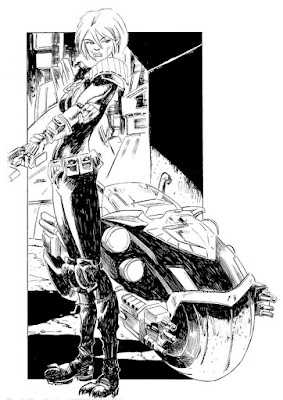 The surprise for issue 34 comes courtesy of Santiago Reyaud (who also writes a Dredd) and Barry Renshaw as they resurrect Night Zero, an android cab driver who does, um, stuff. Look, it was a long time ago and I barely remember it. Luckily, it's fully accessible to new readers (or forgetful ones), as we see the hero, Tanner, being drawn into  a crazy guy's murderous intentions because he's that sort of cabbie. The smart story with a little twist impresses, whilst the art is a little blocky but quite suits the story and clearly shows the action.

Another blast from the past is Bix Barton, still wibbling on about the rum and uncanny with the help of his cane, Michael. Mark Howard again brings us a tale of fourth wall breaking that will have readers scratching their heads and laughing out loud, also managing to bring back a character from 2000AD history that will delight ancient squaxx like me. Simon B Hayes' art is pretty decent all round and this strip is a nice sidestep overall. 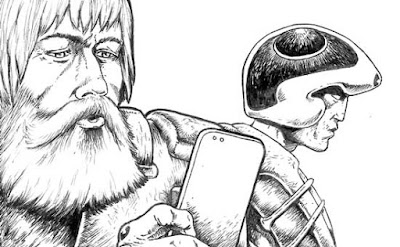 Finally we get a two page Strontium Dog story from artist/writer Brian Corcoran, and it's a perfectly condensed tale that doesn't waste too much time bringing the reader to the end gag. The art really stands out as well, full of detail yet never overcrowding the panels. A perfect way to end the issue.

As usual, Zarjaz manages to throw everything it can at the reader without missing a beat. The return of old favourites plus those nearly forgotten makes it a heady mix of thrills that Tharg himself would be proud of. Long may it continue.

ZARJAZ Issue 34 can be bought from July 1st at: https://www.futurequake.co.uk/zarjaz/