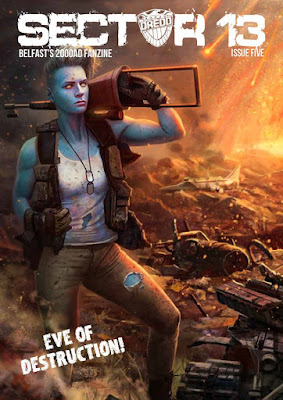 The lastest issue of Belfast based fanzine Sector 13 certainly grabs the eye, with a superb Rogue Trooper (well, Venus Bluegenes anyway) cover made from live cosplay and digital tinkering. It's a cover that makes you want to see what's inside and so does it's job perfectly. Of course, regular readers will be wanting to take a look anyway, as Sector 13 is a high quality fanzine that has been getting better with each issue. It's A4 size with 42 thick, glossy pages and sumptuous colour, not your usual fanzine by a long shot.

Issue Five kicks off, as usual, with a Dreddworld photo story featuring the Sector 13 cosplayers, a motley crew of perps and ne'er do wells who meet up to get drunk and discuss knee pads. What they also do is star in very impressive photo strips that look great considering this is done on a budget. 'When I Lost Control' features the unexpected result of an EMP blast let off at Ed Norton Block by a known seditionist. It's a tight, interesting story with plenty of nice small touches, featuring character development for one of the strip's regular characters, Judge Knight.

'The Lament Of Gravlax' is next, and despite the title it's a rather silly four page humour story written and drawn by the very talented Cat Byrne. Basically, Aliens want to abduct some humans but because of all the PC nonsense on their planet they have to be subtle and kind about it, no 'zap bam boom' or death rays allowed! It's a wonderful antidote to the seriousness of the photo strip, and Byrne has a knack for humour that combines well with the colourful, cartoony vusials that jump off the page. Excellent work!

The third strip introduces the reader to a new title character, the excorcist Judge Whatley, who is not the barrel of laughs you might think. A demonic wossname is threatening the city and only Whatley and his apprentice West can stop it. A standard type of set up from writer Peter Duncan, but the devil is in the details, and this is an extremely good story that has a dark twist that left me hungering for the next issue. The black and white art, from Joseph V Parangue, is very impressive, reminding me quite a bit of 2000AD legend Boo Cook, and I can't wait to see more of his stuff.

The centre pages (and the next two!) are given over to a second Gronks story, following last issue's 'Legend Of Snarki'. 'The Gronk With No Name' is unconnected apart from the titular character's race, and we meet a Gronk who just isn't like the other Gronks, starting with the fact he's hanging out in a spaceport bar. Alan Holloway's script once again blends pathos with action and humour, while artist Ed Doyle (a known Gronkophile) delivers bright, colourful images that suit the story down to the ground. Your poor heartses will never be the same!

A short interlude, called 'Interlude' (ya see what they did?) is next, following on from the photo story as Judge McBride investigates a recent case converning Judge Knight. Donna Anita Black's Simon Harrison-esque visuals work very well with Peter Duncan's script, effectively filling out Knight's story a bit more, making you realize why he has become disillusioned with Justice Department.

We return to the darkness next, with another Excorcist Judge story, this time featuring Judge Merrin, sent to apply Judge boot to a demon's backside in 'The Terror Of Titus Tower'. Firstly, the strip looks great, with lovely clear black and white art from Morgan Brinksman. Secondly, it's another case of what is a standard set up being built on with clever twists and a satisfying pay off, so thumbs up for writer Mark Keenan as well. A great one off strip that made me think a bit more of what exactly is inside a cloned Judge.

Things get very silly for the next two pages, as Davy Francis' 'Revengers: Deadend' throws a few laughs around with a throwback to the likes of MAD magazine as some robot superheroes go nuts at a screening for the new Revengers movie. It's very daft but funny with it, but looks quite messy, like he sent the Editor a few pages out of an A4 notepad, with the result being we actually miss the final pay off line that is cut off by the page size. I'd have liked to see it redone on white pages, although it's still a good laugh with plenty of nice touches.

Finally, we return to the story of Judge Knight, and I can't go too deep into this without spoiling the ongoing plot. It does a decent job of setting up the next chapter in his story which I assume will continue next issue, and Sector 13 has to be appluded for this approach which has resulted in a magazine you have to take your time with to follow the story properly. Peter Duncan scipts again, and whilst I find Scott Twells' art a bit rough, it's rough in a McMahon sort of way, and fans of the old master should certainly appreciate it. Composition wise I've no conplaints, though, as it's all well handled and well told.

So that's Sector 13 issue 5. It's a ludicrously solid read, with thrills, humour and theological discussion. I genuinely think that several strips would be very at home if you found them in 2000AD itself, and as ever the photo strip is very well done. The fact that the story from it is continued throughout the mag is testament to the ambition of the people involved. Available through the post or at various conventions (such as Lawless May 18th in Bristol), it's well worth picking up.

Buy It From Box Of Rain 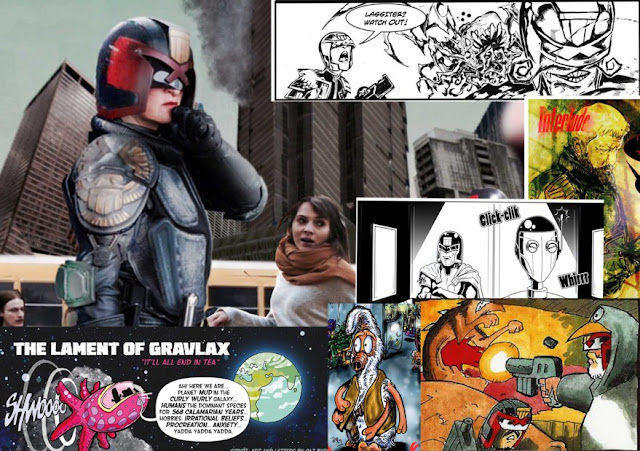