ROY OF THE ROVERS - "KICK OFF" (Graphic Novel) 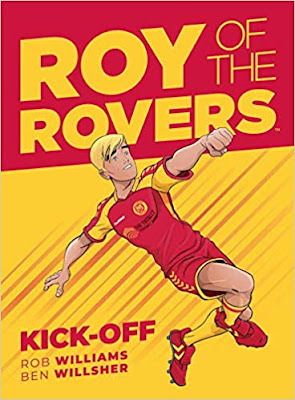 Good afternoon, football fans. It's a pleasure to welcome you once more to 'Footy Fan Focus' with me, Des Limeham...

And me, Johnny Grotson. Today we're looking at the rebirth of a player many had thought they would never see grace a pitch again, the inimitanble Roy race, also known as Roy of The Rovers.

It's a bit early for that sort of pun, Des.

...sorry Johnny. Roy's career started way back in 1954 in Tiger, getting promoted to his own title in 1976. We thought it was all over when he was taken out of the game in 1995, and apart from some substitutions in Match of The Day magazine it certainly was.

Listeners may be wallowing in nostalgia at this point - I know I am! I fondly remember Roy captaining Melchester Rovers to many a title and cup victory, often with last minute goals. he was shot, kidnapped and generally mucked about over the years, but through it all he was always our Roy.

Except maybe when he signed two blokes from Spandau Ballet, eh?

Well, yes, but it proved he was fallable, Des, and no doubt added a few teenage girls to the readership as well. 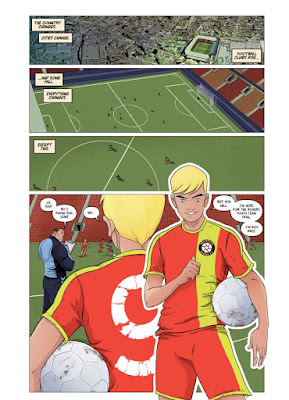 So what's the sory with this new book, Johnny? Surely a one legged pensioner isn't going to attract many young footy fans!

You've hit the nail right on the head there, Des .Luckily, writer Rob Williams has jettisoned Roy's history and rebooted the whole football match from scratch. Roy is now a seventeen year old chancer who breaks into the first team of a Melchester Rovers bereft of players and languishing at the bottom of League Two. Mention is made of the glory days of old, but at the moment this is a teanm that seriously needs a rocket behind it, Roy's Rocket if you will.

So does this mean we're going to see more old characters rejuvinated? Maybe 'The Hard Man' Johnny Dexter, 'Mighty Mouse' or even Gordon Stewart, the 'Safest Hands In Soccer?'

Funny you should mention them, Des...

You told me to, Johnny

Yes, yes... anyway, an interesting fact about the new strip is that the coach of Melchester Rovers is none other than Johnny Dexter himself (who hasn't mellowed, by the way) and the manager is none other that Kevin 'Mighty' Mouse. Roy's team mates include familiar names such as Loty Peake, Vic Guthrie, Paco Diaz and in goal is a young Scottish lad by the name of Gordon Stewart. It's a smart piece of tactics from Williams, and one that will bring a smile to many old faces including mine. 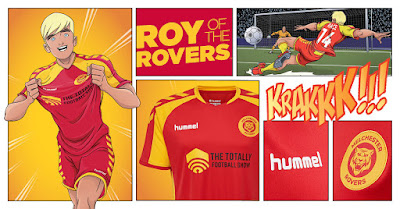 I must say, Johnny, that I was very impressed by the art myself. New signing Ben Willsher, previously a team player at 2000AD, has produced a nice, friendly, uncomplicated style that will entice youngsters. It's a bit more cartoony that his Judge Dredd work, but it fits the subject matter and sizzles with energy when required.I wouldn't be surprised if the lad drew for England one day.

Indeed, Des, and while you were lookig at the pretty pictures I was thoroughly enjoying the script, which is both exciting and funny throughout. Most of the giggles come from Johnny Dexter if I'm honest, and there's nice interplay between Roy and his new Team mates as well.

I see that instead of a comic this is an actual hardcover book, and it's not too big at just 56 pages. This worried me at first but I realised that this makes it the same size as two full issues of your standard Marvel of DC comic at about the same price or cheaper, meaning it is cracking value and sits on your shelf next to all the old annuals.

It remains for me to say, Des, that at the final whistle 'Roy Of The Rovers: Kick Off'' was as enjoyable to read as the old classics themselves without being in any way dated. Personally, I'm eagerly awaiting volume two in March, and hope that there's many more to come. Any final words from you, Des?

I love you like a brother, Des, but you're an idiot.