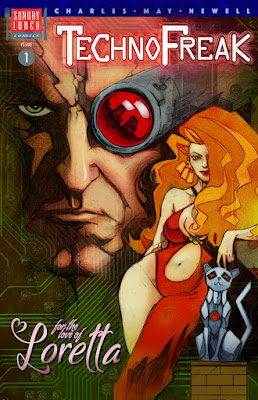 Technofreak is a labour of love, and a long labour at that. the idea gestated about a decade ago, changing and evolving until finally we have an actual comic. The brainchild of (mostly) cover artist John Charles and writer Barry May, although they function here as co writers and creators rather than writer an artist. The art, based around Charles' designs, is handled by Tom Newell, a relative newcomer to the scene hoping to make a sizable dent.

The story concerns private eye Jon Sherlock, the technofreak of the title. He can do all sorts of, well, technical things, very useful in the future London setting. Interestingly, the most memorable character is Maurice (More-eece, like the french say), a sentient robiot cat with a knack for exposition. thrown into the mix are the thuggish Neville Brady, another, less cyborgy private eye, and the lovely Loretta, once Jon's squeeze, now Neville's and now missing presumed somewhere. Put simply, our hero has to find his ex girlfriend with the help of Maurice and the hindrance of Neville, a man who maims first and asks questions if he remembers. 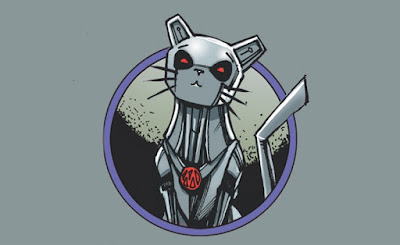 The vibe I get from Technofreak is of 90s UK Marvel comics, especially in Newell's art style. It's not the prettiest but it has a certain charm and certainly gets the job done. The story itself doesn't take any risks and is agreeably easy to follow with several fun moments that let you know this is a comic that you're suuposed to enjoy and then recommend to a friend. As i've mentioned, it's Maurice that stands out, but that may just be because cats are awesome, so robot cats that shoot lasers may be even more awesome. John Sherlok himself is a bit bland, with Neville coming accross as the world's worst private eye and Loretta basically a standard femme fatale with a wardrobe of bikinis. 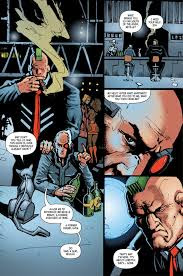 So Technofreak issue one is not deep, but it sets up the main characters very well, looks fine and is entertaining. The mark of a decent comic is would you want to read another issue straight away, and I certainly would. I want to see what happens to Jon, Loretta and Neville, and I want to see if Maurice catches any robot mice. Most of all I want to see an independant bunch of creators build their brand whilst delivering a fun, eminently readable comic. Check it out, you might find yourself pleasantly surprised.