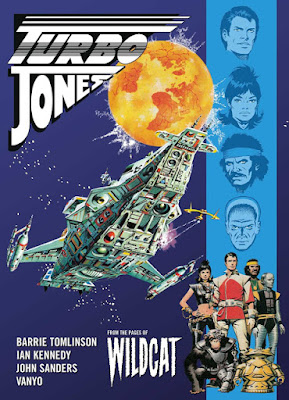 It's Treasury Of British Comics time again, and 2019 sees the release of Turbo Jones, a character that many will not be familiar with. Turbo (must have been an odd christening) was the star of the short lived, bi-weekly comic Wildcat saw out end of the 80s with it's paltry twelve issues. After a typical hatch, match and despatch merger with Eagle in 1990 Turbo's adventures continued for a while before bowing out gracefully. 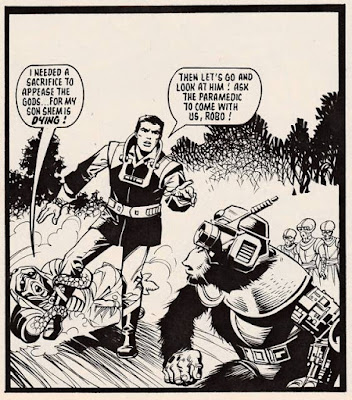 The story of Turbo Jones converned Turbo's conclusion that the Earth was doomed (We're doomed, I tellls ya), and the fact that none of the big nobs believed him (see Trump and climate change). He arranges for a massive ship called Wildcat (hey! That's the comic's name!) to be built, so that the human race can search for a new planet. Was he right? Well, as the Earth blows up not long after the colonists have left I'd say he was spot on! 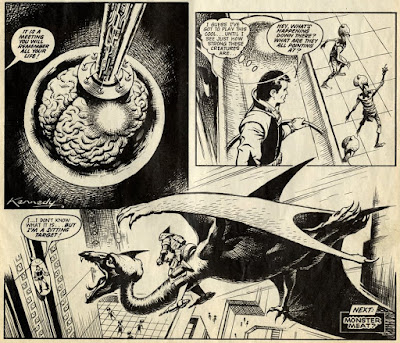 The idea of the Wildcat comic was that it would have several strips, each one following a different main character on the quest for a new world. It's an ambitious and pretty smart idea when you think about it, but obviously something didn't take with the public. Masterminded by editor/writer Barrie Tomlinson, the Turbo Jones strip was lucky enough to be illustrated by the great Ian Kennedy, whose brilliant art elevates some poor scripting in places. Turbo's three main associates were Loner, an ex-mercernary who pays for the whole thing with his lottery winnings (really), Kitten Magee (stop sniggering at the back), a mysterious woman with secrets and stuff, and Joe Alien, who is an alien. 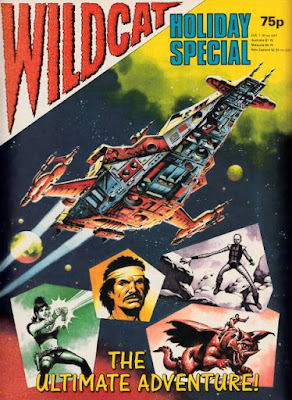 Collected here are Turbo's strips in their entirety, so whilst we are introduced to the others they just disappear to do their own thing. Turbo himself is a bit of a Dan Dare character, all heroic and manly, aided by his companion Robo. Now Robo is quite obviously a chimpanzee that has been cybernetically augmented so he can speak, reason and do helpful electronic stuff. The thing is, he's referred to as a 'Robot' throughout, even by himself, and it's REALLY irritating. Take a look in the mirror, Robo, you're a bleedin' chimp with metal bits glued to ya! 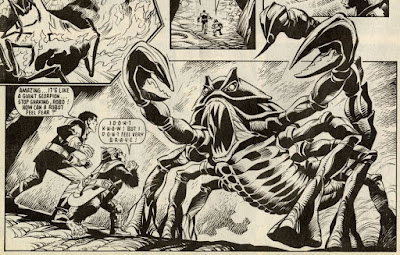 Anyway, Turbo and Robo visit a few different planets and invariably end up getting involved in local affairs, The message seems to be that most aliens are bascially dicks. It's all rather entertaining, though, and when the scripts fall down, which they do a few times, Kennedy's art is always there to drool over. Apparently the comic was aimed at a younger reader than 2000AD, which by then was proper teenage aggro stuff, but it's not a 'kiddy' story and is quite acceptable today for any age. The main problem I have is that for an Editor Tomlinson lets some very poor scripting through the net, with logic going out of the window a few times. 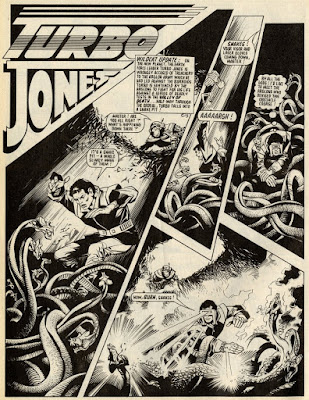 This is the first time I've ever encountered Turbo Jones, aside from reading an article or two, and I enjoyed it more than I thought I would. It's the sort of thing that would have a made a great Saturday evening show alongside the likes of Battlestar Galactica dn Buck Rogers, just in comic strip form. Whislt the scripts are sometimes flawed they are still entertaining and contain a few very decent science fiction ideas, and as I've stated the art is as good as you could want. Hopefully if this one sells okay we'll find out what happened to Turbo's crew mates in a future volume.