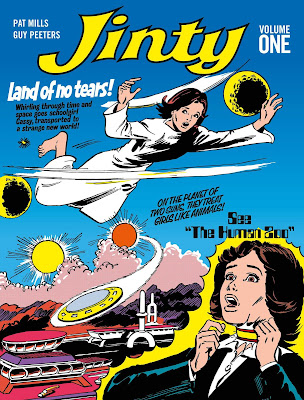 When I was a kid, I saw all the girls comics on the shelves like Tammy and gave them a wide berth. After all, I was a boy, and boys didn't want to read stories about ponies, ballerinas and cooking. Yuk! Completely unknown to me there was a wealth of science fiction and cruelty nestled within the innocent looking covers, as girls comics focussed on making it as nasty as possible for thir strips' protagonists, because that's what female readers seemed to thrive on. Okay, so the heroine won in the end but not before she'd had the metephorical shit kicked right out of her first.

The first volume from Jinty (zero chance any 1970s boy would pick that up, right?) collects two stories that certainly fit the mould, with science fiction and hardship going hand in hand. First up is "Land Of No Tears" by Pat Mills, who would later go on to create some of the best stories in 2000AD. In the strip, Cassy Shaw is a schoolgirl with a damaged leg who has to wear a surgical shoe. the problem is that she's also a right cow, using her minor disability to gain sympathy and get out of trouble. As this is girls strip we know she's in for a hard time, but in this case we're looking forward to it! 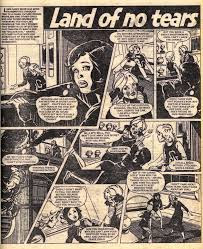 Under the anasthetic during corrective surgery (which she doesn't want because she will be treated like anyone else) she goes through the standard space warp/plot device and awakes in a mirror world where anyone with a slight defect is a third class citizen and emotions are supressed. Lumped in with other rejected girls, she determines to show the up-their-own-arse perfect people that those they look down on can be just as good as their "betters". Subtle as a brick and with plenty of nice touches, this is very decent story with plenty of "What the hell?" moments. An old hand when this was published in 1977, Mills effectively nakes us root for Cassy as she learns her life lessons, and that's what this type of story is all about, innit. 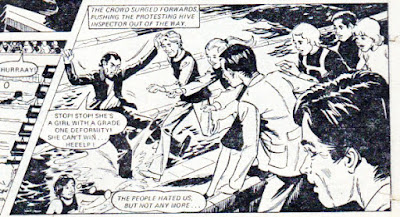 Second story "The Human Zoo" is thankfully cut from a different cloth, giving the volume a more fleshed out feel. the science fiction element is ramped up to eleven by writer Malcom Shaw as sisters Shona and Jenny are abducted with their classmates after a trip to the zoo and taken to another planer where - gasp! - the aliens put humans in zoos!! Okay, so you could see that coming, but the old sci-fi role reversal ploy is played very well as the sisters are treated very differently as they accept the situation in their own way. Of course, there is nastiness aplenty as the aliens treat humans as we would dumb animals (they are telepathic and so don't see our noises as speech). The underlying moral, hammered home with a sledgehammer,  is unsurprisingly that we shouldn't treat animals badly. Regardless of any unsubtlety it's a cracking story that must have thrilled British girls back in the day and can happily do so again.

Special notice must go to the art, supplied by Guy Peeters on both strips. Clear and well laid out, he brings a great realism to the stories, with the only downbeat being a mysterious character in "Land Of No Tears", although when we learn their secret the werid look becomes more understandable. All in all, the writers were lucky to get him to flesh out their scripts. 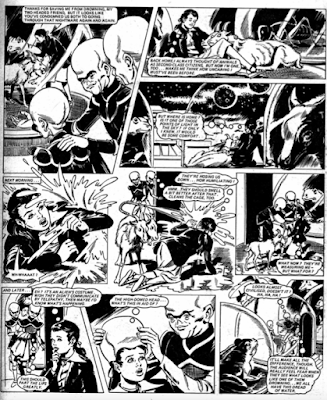 "Junty Volume 1" is a cracking slice of 1970s comic history, with great art and involving stories. It's not mad science fiction but it's also certainly not remotely what I imagined these comics were doing at the time. Accessible to both male and female readers of any age, Rebellion must be thanked for giving these strips a fresh airing thanks to their treasury Of British Comics imprint.