BELLA AT THE BAR - Volume 1 Review 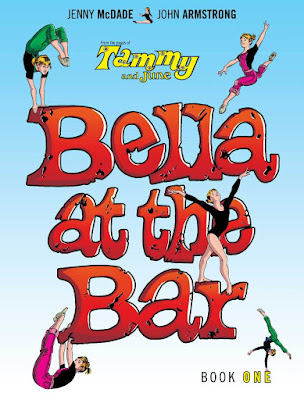 Whilst Rebellion's Treasury Of British Comivcs has so far focussed on titles aimed at either boys or boys and girls, 'Bella At The Bar' is their first release that was originally a straight 1970s girls comic story, with no sci fi or horror elements. That said, it's a wise choice, as the story was  very highly regarded and as a reult is remembered fondly by thousands of ladies who will have sympathised with the titular Bella every on every step of her journey.

Like many stories of the time, the lead character's troubles are cause by horrible relatives. Rarely was this the parents, and whilst stepmothers and stepfathers were a popular choice in this case it's Bella's aunt and uncle who treat her like dirt so she has something to fight against and ultimately rise above. Bella Barlow works for her uncle as a window cleaner, with him and her aunt teating her like a slave at home as well. There's no mention of what happens to her parents, but it's not really important. What is important is that Bella has a natural gift for gymnastics (not the law, if you were thinking that the 'bar' in the title was a legal one) . Whereas her guardians won't let her do it unless they can make a few quid, Bella's determination leads her down a few different paths (all filled with obstacles, naturally) in her quest to just be the best gymnast she can be. 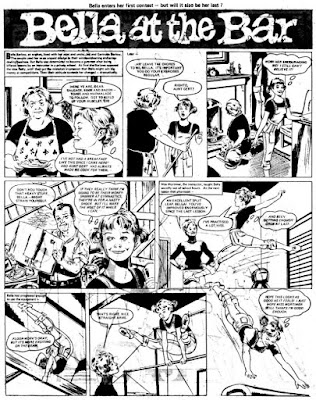 Write Jenny Mcdade, who would go on to find fame by adapting 'Supergran' for TV amongst other things, joined UK girls comic Tammy and proceeded to knock it out of the park with this one. Similar to strips like 'Roy of The Rovers' or 'The Leopard From Lime Street', 'Bella At The Bar' shows a knack for making you want to read the next instalment straight away until you've finished the entire book. Bella herself is very likeable, a plucky little cockney ragamuffin, whilst the bad guys will have the reader booing internally with every curled lip, put down and cruel act. The art, by John Armstrong, is uniformly good throughout, with his figurework bringing the gynmastic scenes to life most effectively.

I know full well that I'd have enjoyed this as a lad, even if I wouldn't be seen dead reading a copy of Tammy, but I'm rather surprised at how much I enjoyed it as a 49 year old grumpy old man. There's a tad over 100 pages here, and like 'The Leopard From Lime Street' before it I was itching to read more of Bella's trials and tribulations. The cut off point is a natural one, though, with Bella actually getting a win for a change, though I'm pretty sure it doesn't last. Released on 12th July, this is definitely one for all those who didn't have a sister to nick comics off, and those who remember Bella with the fondness her strip deserves.