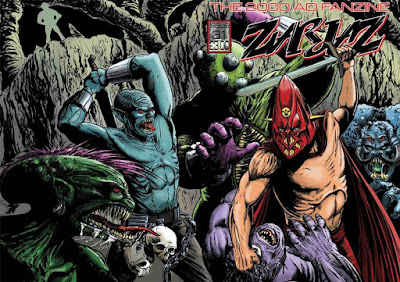 Considering that 2000AD is over forty years old now, it's admirable that there are fanzines that manage to bring new and interesting content from creators who are just happy to get their story or art accross and to share their love of some of the galaxy's greatest characters. Never less than entertaining and a literal breeding ground for future stars of the parent comic, Zarjaz once again has a scrotnig cover from a current 2000AD/Megazine art star, this time Steven Austin, who gives us a lovely interpretation of Torquemada after he's been lobbed down into the alien pit.

Inside we get 6 very different stories, spread over 40 pages or so, starting with the aforementioned Torquemada, as Lee Robson has him as victim of a coup resulting in the also aforementioned lobbing into the alien pit. 'Heads You Lose' is a pretty decent story, illustrated by 'zine regular Steven Denton. The art is certainly good enough, but I can't shake the feeling Denton could have used a smaller tip, as the thick(ish) lines are a little muddy on the A3 page size. Oh, and in case you are wondering how Torquemada could ever get out of the alien pit, so am I, and I've re read it several times. Bonus points for shoehorning in 80s pop names, 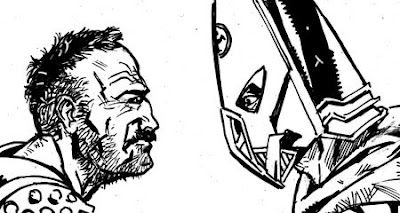 Nest up is a fun little strip called 'Judge Fudge & His Pals', where Mega City's finest are re imagined as confectionery, in what I assume is a Justice Department cartoon aimed at getting kids to grass people up to Judge Pal. Jonathan Dhenry certainly has fun with the visuals, which are clear, clever and worth taking time over. Scriptwise, it's a quirky and funny with a chortlesome take on a classic Dredd moment fans should love, so full marks to Matt Sharp also. 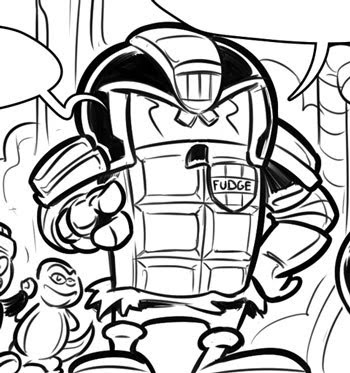 Things take a nasty turn with Lizzie and Conor Boyle's Button Man tale - 'Lucky Day'. It's dark and violent with a neat script from Lizzie and classy art from Conor. It's a separate tale to the main Button Man arc, and although there is some slight confusion (to me, anyway) as to exactly what's going on it's still a well told, gripping tale with art that separates it from the rest of the magazine in a good way.

Back to Mega City 1 for a one off Anderson story next, which sees poor old Cass visited by ghosts of the past for the billionth time. This isn't a criticism, mind you, as 'Facing Evils Past' is a dark story from John Osbourne which shows just what you can do with 6 pages and a fertile imagination. He's helped out by David Peloe, who's art suits the story well and flows clearly from page to page. I don't recall hearing of the protagonists named at the end before, and feel the idea could certainly be explored more in a follow up. 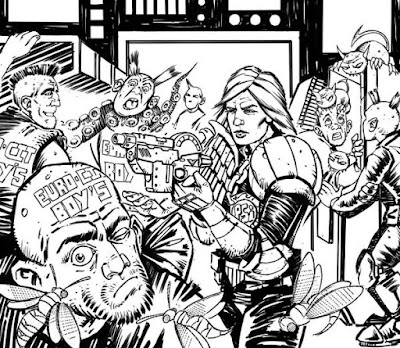 An unusual entry comes next, as Mark Howard tackles the subtle madness of Bix Barton, Master Of The Rum & Uncanny. It's always been a bit or a marmite strip, mixing humour and the occult along with a decidedly and deliberately dated hero, and kudos to Howard for managing to get it right here. Simon Bennett Hayes provides the art, and whilst he does a fine job we again have thick lines that make it appear muddier than it is on aa smaller page. In his favour, though, he manages to get a great deal in each panel where required. Bonus points for the title: 'RumMothers Do Ave Em'.

Finally we have part 2 of 'Desecendants' by Robomonkey 147, with a concluding part to come in issue 32. In part two we follow Linda Bronson's droid as he seeks revenge for her death on the Judge system, whilst within that system Cadet Bronson becomes directly involved. Suffice to say it's as good as part one and I look forward to seeing how it all ends.

As usual, this is a solid issue of Zarjaz with a decent mix of stories. Sometimes in fanzines there can be ropey art or poor scripts, but editors Dave Evans and Richmond Clements keep a lid on this one like it was their own baby, probably because it is. Copies are available at only three pounds Earth money, just click on the link!

Buy From FUTUREPRESS Here
Posted by Reviews Ed at 08:31