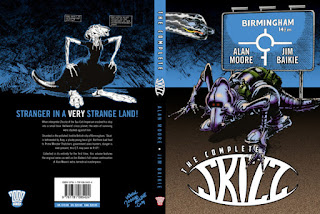 Flippi-neck! I remember this Skizz fella, as he appeard way back in the mists of time (1983 in Earth years) in a comic called 2000AD. You might have noticed I like 2000AD, and strips like Skizz are one of the reasons I have read it for over 40 years now.

At the time, comics were never shy of lovingly homaging (ripping off) whatever Hollywood was doing that looked like it might be popular. The idea for Skizz came from E.T, which was set to be a massive film when it was released, and Alan Moore (last seen grumbling behind a beard) was tasked with doing a story about an alien stranded on Earth. Moore has stated he never even saw E.T, and as a result he produced a story with more depth, nuance, heart and politics than Spielberg would have ever had the balls to do.

Although an early work, it's clear from Skizz that Moore was a bit good at this comics lark. It helped that artist Jim Baikie was a perfect fit, complimenting Morre's kitchen sink script with clear yet very down to Earth visuals. The story tells of Interpreter Zshkzz... Zskitss... (bollocks to it) SKIZZ, who crashes on the blue planet and wants to go home. He is fopund and befriended by schoolgirl Roxy, who enlists her friends (older working class blokes) to get Skizz home before the evil scientists can dissect him. It's a basic premise that's brought to vivid life by injecting real characters and situations, making it as much a commentary on Thatcher's Britain (Down with Thatch - right kids?) as it is a science fiction romp. It certainly had an impact on my 14 year old brain, I can tell you, and still rouses the emotions all these years later. 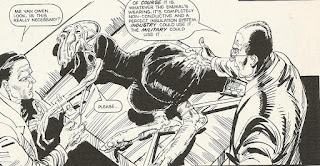 Although Moore never returned to the character, Jim Baikie decided to carry on the story nine years later on his own, scripting as well as providing (now colour) art. To be honest he was on a hiding to nothing trying to follow what was already a bona fide classic, but to my surprise he does a pretty good job. He delivered two sequels, and they delve much deeper into the culture of the Tau Cetans, revealing them to be no less bonkers than us on Earth. In one, they want to snuff out Earth, so we are reunited (even if Skizz isn't, physically anyway) with Roxy and her friends as they try to find a way to use Skizz's technology to save the planet. All the while, Skizz himself tries to escape his enforced quarrantine, where he has been exiled due to his un Tau Cetan antics whilst on Earth. the second sequel is weaker, leaving behind the original Earth cast and concentrating on Tau Cetan political machinations, but it is still a good read and gets comic mileage from two Tau Cetan time travelling assassins despatched to Earth. 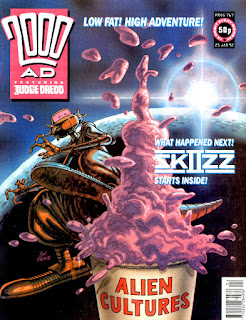 Overall, The Complete Skizz is a great read, from the near perfect original to the flawed but still very enjoyable follow ups. Unsurprisingly, Alan Moore doesn't rate it that highly, but Alan Moore is a miserable old sod, so it's not that much of a surprise. regardless of this, I hope that Jim Baikie feels proud of his own contribution, because he deserves to be. Yet another quality reprint worthy of splashing your galactic groats on. 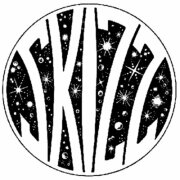