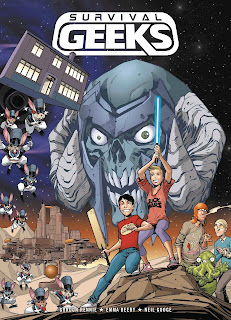 I've got a bit of a Marmite relationship with long time 2000AD scribe Gordon Rennie. Whilst he impressed with the likes of Cursed Earth Koburn and Absalom, I was left cold my most of his other work, or initially interested and soon bored. In this instance, though, he pairs up with Emma Beeby, a relative newcomer to the comic, for a mad dash through fandom that will have you grinning from page one.

Starting off as a tentative three parter (part of the horrendously named "Thrill3r" series) the first story introduces us to Sam, a girl who unwisely shags a geek lad on a drunken night out (poor thing). Unfortunately, when she tries to leave his house in the morning she finds it is a dimension hopping dwelling and she's sort of stuck with Simon and his nerdy flatmates as they try to find a dimension full of zombies (because that would be AWESOME), or even one where Firefly wan't cancelled. It's not quite Quantum Leap, as these guys don't want to go home - they're having to much fun. 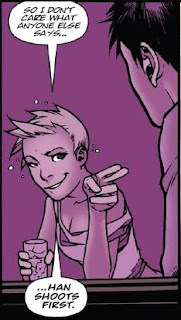 What follows is 100 pages of nerd heaven, as the geeky script is bolstered by some wonderful art by Neil Googe, who shoehorns in as much as he can so that rescanning many panels is a joy of discovery. His style is remeniscent of Jamie Hewlett and Phillip Bond, in that it's cartoony but vibrant and detailed with it, with a penchant for geeky in jokes that is only matched by that of the writers.

As we follow the geeks through a steampunk dimension (we are made painfully aware that steampunk sort of, well, sucks), they even pick up a new housemate - a baby Cthulhu called Howard (the name being yet another geeky reference). They even meet up alternate dimension versions of themselves, also dimension hopping in their house, the twist being that the sexes are reversed. The girly led universe even has - gasp! - a FEMALE DOCTOR WHO! Come on guys, sometimes you can push this shit too far, ya know. 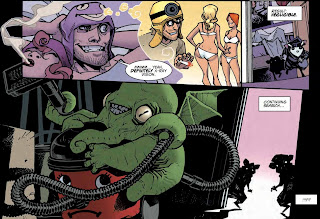 In all seriousness, I had forgotten how absolutely chucklesome Survival Geeks was. Well rounded characters, excellent art and laughs aplenty, it nails the tricky task of making a successful sci fi humour strip. If you haven't read it this is the perfect time to allow your inner nerd out to play.