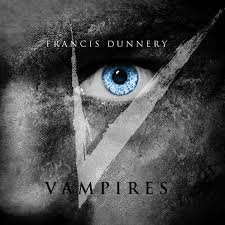 I suppose I should say that I’ve long been a fan and admirer of Francis Dunnery. He made some incredible albums with It Bites, and went on to a solo career that has produced some brilliant work. For me, he hasn’t done anything of real interest since ‘The Gully Flats Boys’ over ten years ago, with more recent releases showcasing a man who really doesn’t seem to sure what he wants to do anymore, revisiting his past and wibbling on about astrology and not actually writing any new music. Surely, I hoped, an album named after one of It Bites more aggressive tunes might be different?

Well, the simple answer is ‘no’, as ‘Vampires’ is a double dig pack CD that contains 14 reworkings of It Bites songs. Okay, you may be thinking, maybe this is a chance for Frank to give us interesting new versions of some classics that can sit proudly next to the originals. Again, it’s a big ‘no’ there, as almost all of these add absolutely nothing to the originals. ‘Underneath Your Pillow’ does change the ending so it’s like the old live version but that’s it. There is always the excuse of getting a better production on the songs, but to be honest the originals were pretty damn well produced, and these in general don’t sound as good, although if you were completely new to the songs you would find little to complain about. Indeed, ‘Screaming On The Beaches’ lacks the youthful energy of the original and just sounds hollow, whilst the title track burns up when exposed to the sunlight of the original.

Another bugbear is the price we fans are paying for what is in effect nothing new. $25 for a download? $30 for a CD? Who do you think you are kidding, Mr Dunnery? I understand yours is a cottage industry, but only the most dedicated fans will want to fork out their hard earned for an album they might as well already have. As a ‘Best Of It Bites’ this is a cracker, but as a fan I feel completely ripped off. Ironically, for an album called ‘Vampires’ this is utterly toothless.