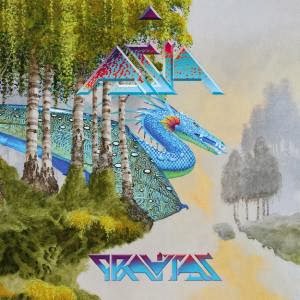 One of the problem’s I have had with Asia in the past is their propensity for releasing albums full of mid paced, samey songs. This is one of the reason’s I loved “XXX” so much, as it really rolled along and showcased varying speeds and styles. “Gravitas” does not do this, not even a tiny bit. Opening track “Valkyrie” will have you singing along, but only because John Wetton sings that very word over and over. Next is eight minutes of “Gravitas” that feels more like fifteen, with a dull two minute intro (to build gravitas, I suppose) and a nice opening riff that dissipates into five more minutes of mid paced averageness that threatens to be good but never quite makes it. It only wakes up at the end when we finally get a sweet guitar solo. The most interesting track is “I Would Die For You”, which rolls in at just over three minutes and has absolutely no flab on it anywhere.

“Gravitas” is a rather uninteresting album overall. If a few of these slow tracks, like “Russian Dolls” and “Nyctophobia” had been part of a pacier album then they would have been fine, but when the vast majority of an album is so unchanging and mediocre it does begin to grate. There’s no real flow to many of the tracks, no sense of urgency, none of the passion of “XXX”.  In short, “Gravitas” is boring. It’s not Prog-boring, as Asia have never really been a Prog band, it’s just dull in a generally dull way. I have a feeling this will be the biggest disappointment of the year for me, and that sucks.