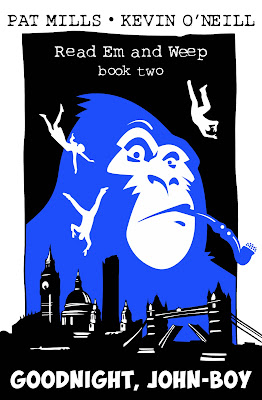 If you are an avid reader of this little blog (surely there's one) you may remember I reviewed Pat Mills and Kevin O'Neill's debut novel earlier this year, and having thoroughly enjoyed it I was happy to see the sequel arriving so soon afterwards.

'Goodnight John Boy' sees anti hero Dave Maudling still toiling away at Fleetpit Publishing in mid 1970s Britain. As an editor, he is able to subvert his readers by putting in genuine ways to make lethal devices/poisons within the pages of daft boys own romp 'The Caning Commando', but whereas he intended for his hated readership to off themlselves he has discovered they are instead utilizing the methods against adults who most definitely deserve it. As he comes to terms with this, Dave is also still trying to find out who murdered his sainted mother, as well as attempting to indulge is rather unhealthy fur fetish and get it on with the lovely Joy.

It was a mad life in British comics of the 70's and the authors were there to experience it. As a result, this book continues the trend set in the previous one of mixing facts with fiction very satisfactorily. The two are best known for their work on 2000AD, and as such the latter part of the book involves Dave preparing to set up a new science fiction weekly called 'Space Quest'. Indeed, art imnitates life a lot when it comes to the comic stuff, and it brought a smile to my face when the subversive, violent "Aaargh!" is deemed to nasty for kids and scrapped, only to be brought back in a heavily sanitised form, just like Action in the 70s.

Storywise, I was certainly kept gripped. It's not an action fuelled romp, more a wander round the backstreets and mucky clubs. We see Dave finally discover his backbone and become more of a likable lad than before, and also there's plenty pertaining to the abuse of children by authority figures. Crikey! Despite this subject being rather near the knuckle it's refreshing to have authors not afraid to tell it like it is, although it's not horribly graphic or anything. Elsewhere, there's actually plenty of chuckles throughout, as it's peppered with memorable, slightly mad characters, not to mention more stories from The Caning Commando that had me giggling at their absurdity.

If you enjoyed 'Serial Killer' there's no doubt part two will be devoured with equal gusto, and like me you'll be waiting expectantly for the concluding volume. The quality hasn't dipped in the slightest, and it was no chore to rip through it in two sittings. Fans of British comics history will find more to enjoy than those not aware of how it all went down, but even newcomers will find a satisfying, amusing read. Think Tom Sharpe meets Robert Rankin in a dark alley and you're half way there. Kudos to Mills and O'Neill for keeping this going, so give them your support and give it a go.

https://www.millsverse.com/
Posted by Reviews Ed at 07:58