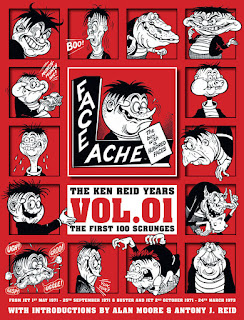 Ken Reid is deservedly a bit of a legend in British kids comics of yesteryear. If you're of a certain age you will have come accross many of his creations as I did when I was a kid. There was Frankie Stein, Jonah, Roger The Dodger (Great dodge, eh readers!) and perhaps the most fondly remembered of all, Faceache. 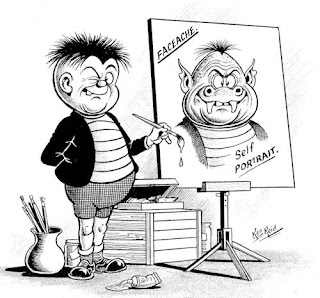 First appearing in Jet in 1971, Faceache moved to Buster and stayed there until Reid died in 1987. Contained here are, as it says in the title, the first 100 single page strips, starting with Jet. For those who never had the chance to read it, Faceache is a boy who can manipulate his face and body into almost any shape, the more grotesque the better. Naturally he uses these talents to con people out of cash or sweets (often ending up a croppe) or in many cases he's just out for revenge on a miserable adult or a bully.  The 'scrunges' of the title come from the sound effect used when he contorts his features, and although it's a northern slang word for filth it fits perfectly and will stay with you for the rest of your life, probably because it's such fun to say. Scrunge. See! 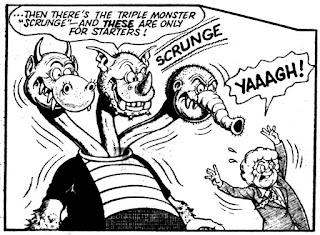 What follows after the nice introductions (from Alan Moore and Reid's son Antony) are 100 very silly and very creative giggle fests. The joy of Reid's work was always his illustrative genius, and he had a way with detail that put him up on a par with Leo Baxendale as one of the most innovative creators of the times. The amount of fun on each page is breathtaking, as are the wonderful forms that Faceache takes every week. I'm amazed at how much I enjoy it over 40 years later, to be honest, and am convinced that even today's litte 'orrors would have a lot of fun with this. Given the choice of another crappy modern annual or a scrumptious, scrunge filled hardback copy of this (for only £14.99 readers!) I know what I'll be buying this year. 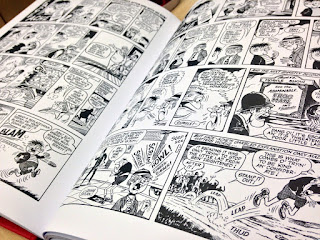