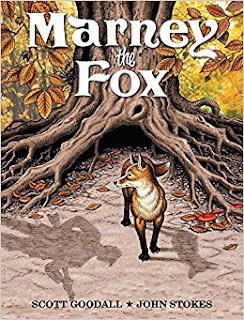 Blimey, this is an old 'un allright. Way back in 1974, Buster ran a dramatic nature serial for a couple of years, hidden amongst the silliness of the likes of Faceache and the title charater. 'Marney The Fox', however, was anything but filler, making a lasting impression on thousand of readers, many of whom will be delighted at this chance to revisit it. 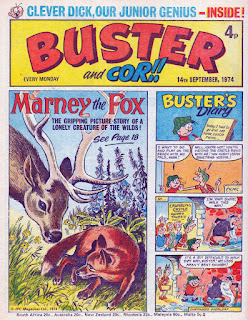 A collaboration between writer M Scott Goodall and artist John Stokes (who never met once whilst working on it), the strip takes the reader down to ground level as it follows the life of an orphaned fox cub named Marney. The first thing that anyone notices about it is always Stokes' art, which is pretty breathtaking for a weekly serial in those days. He admits that he took longer to do it than other projects even though the money was no better, and boy does it show. Marney's woodland world is brought to us in beautiful detail, helping bring the story literally to life. 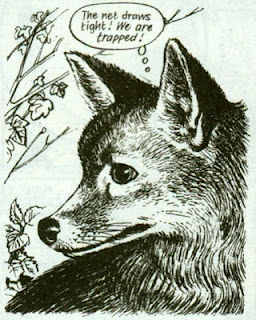 Goodalls scripting is also of a high quality, but those expecting a fluffy nature romp will be sorely disappointed, as young Marney is shat on from a great height with alarming regularity. Orphaned in the very first episode, the poor little bleeder staggers from one near death experience to the next, only to escape and get another good kicking from life immediately after. It can genuinely be quite daunting to read, and as an animal lover I had to take breaks from Marney's almost unrepenting misery. Think more "Watership Down" than "Wind In The Willows". 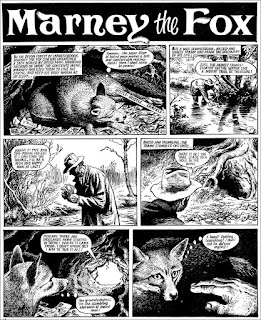 That's not to say, however, that it's not a good read. Obviously Marney gets out of his many scrapes, as there wouldn't be a strip without him, and Goodall's inventiveness in not repeating himself is admirable indeed. Mankind naturally comes accross as mainly evil bastards, but it's good to see that Marney also encounters his fair share of kindly humans (and animals) to try and balance out the gits. There's not a lot of laughs here, and it's not as much of a page turner as "The Leopard From Lime Street" (also a Buster strip), but it's very hard not to reccommend "Marney The Fox" as it is a fine example of quality British comics that deserves to reach a wide audience.