It's been a while since I updated this blog, and I'm sorry for that, but stuff will be along soonest!

It’s been quite a wait of you don’t count “The Expendables” films, but The Austrian Oak is back, attempting to out act the scenery and shooting big guns like he’s not a billion years old. “The Last Stand” is not a film for film buffs, but it’s certainly one for those who appreciate a good old 1980’s style cheese fest, the natural successor to the likes of “Commando” or “Eraser”. 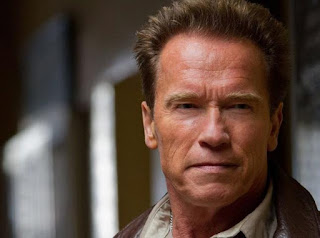 The plot, such as it is, sees a big shot terrorist escape from custody in spectacular style, then steal a high performance souped up car to race to the Mexican border. Such is the speed at his command, the Feds can’t catch or stop him, especially when they realise he will be taking a route through a small Southern town where his mates have bridged a canyon. If only there was a small town sheriff the size of a small truck who saw plenty of mad action during his time with the LAPD, preferably with a dumb accent and ginormous muscles. Well, as luck would have it… 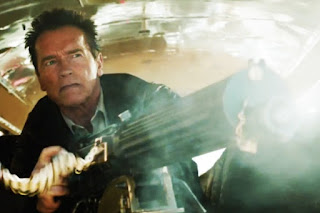 Yep, it’s down to Arnholdt and his luckless deputies to fight off Mr Terrorists gang and also stop the man himself making it over the border. They could, of course, just stand aside and pick their noses for a few hours and not get at all killed, but Sheriff Schwarzenegger don’t play it that way, as we well know. Also, it would be a shit film.

So we get Arnie in full flow, Forest Whitaker as an FBI agent who isn’t sure what the heck’s going on and Johnny Knoxville as a loopy local with plenty of firepower he’s happy to play with. Subtlety is thrown out of the window, and this really should be a massive excuse for reviewers to make jokes about the fact that this sort of thing doesn’t really work any more, especially with old Governatots wheezing about in the desert and making self referential “I’m old” jokes. No siree, that shouldn’t work AT ALL… but it does. 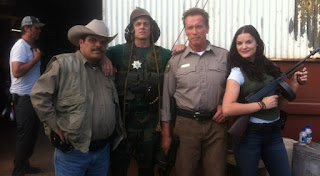 “The Last Stand” has been sneaked in post Christmas with minimal long term advertising, and despite all these classic “Bad Movie” signs it’s a lot of fun. There is a definite need to leave your brain at the door, but at least this is a film that never pretends to be anything other than it is, and tie that together with a decent script and good direction  and you’ve got a fun night out. I expect more these days from Stallone and Willis, but this is the sort of thing that Arnie does best, so sit back and enjoy it.

http://www.youtube.com/watch?v=LTB-gbC4gkY
Posted by Reviews Ed at 05:36