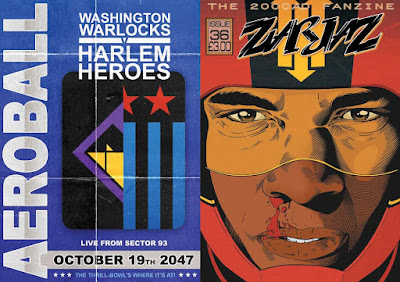 Yay! It's Zarjaz time again, and the yay is because I've been looking forward to this issue of the long running and constantly high quality 2000AD fanzine. This issue comes complete with a very smart cover from 2000AD droid Paul Williams.

A big part oif the anticipation is the conclusion of John Farrelly's 6 part Harlem Heroes story 'Feat Of Clay', which details the back story of the Heroes' main man John 'Giant' Clay. The last two episodes, written and illustarted by Farrelly, bring the story right up to date, with the last panel leading straight onto the first panel of the Harlem Heroes strip published in 1977. It's a nice touch, really, and concludes a satisfying, entertaining and emotional story that may wee be the best thing yet published in Zarjaz. Well done, that droid! 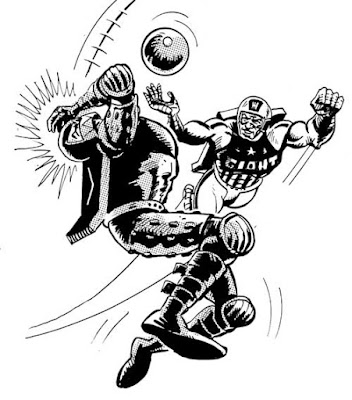 An unusual issue to the mag is an Ace Trucking story 'The Boppo Job', scripted by Jacob Bouvet and illustrated by Alex Paterson. Paterson doesn't try to copy the great Bellardinelli, and to his credit the art works well. the story itself is a fun one, with Ace as usual taking advantage of his Biffo GBH foir the flimsiest of reasons. A fun, breezy story. 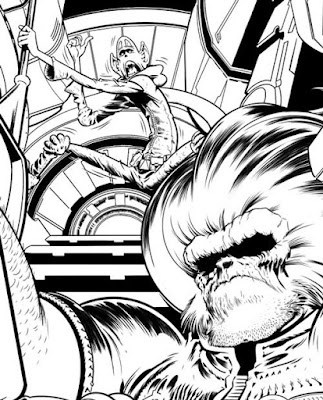 Another seldom tackled character here is Bill Savage, who appears in David Fenn and Barry Renshaw's 'Savage: A Grave Result'. Fitting nicely into the 2000AD Savege strip, it's a subtle tale that isn't short of a bit of shootah blasting but still stays under the radar. Renshaw's art is decent and the script works well, making this a great read for fans of the Pat Mills strip. 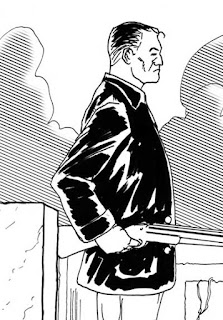 Elsewhere it's Dreddword all the way, with some very different tales. 'The Flower That Grew From Bones' is operhaps the most orginal, as Michael Khazen's script sees Judge Mortis returned to Deadworld as something very odd has happened- life has returned! It's dark with a nice payoff, and the script is effectively brought to life (death?) by Sentinel comic's Ed Doyle. 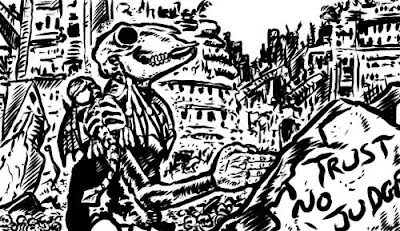 The Dark Judges also feature in 'Back Again - For The First Time', as Mega City One sees an incursion by Death, Fear, Fire and Mortis from an alternate timeline, so whilst they ARE the real Dark Judges they're, like, different ones. Or something. Anyway, it's really an excuse for Daniel Whiston to do a nice story about a psi judge and a scared child, and he's very ably backed by Andy Richmond, who does a great job on the art. 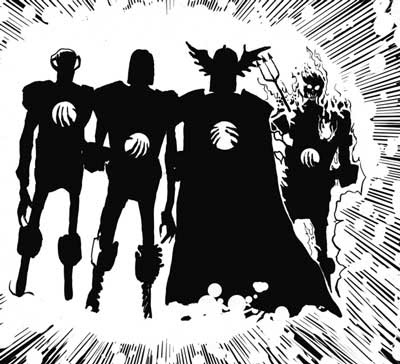 There's a couple of light hearted two page stories written by myself in this issue, namely 'A Joe By Any Other Name' and 'Mean Machine Angel - This Here's A Story'. Aimed squarely at those of you who love short, sharp and funny Dreddisms, like the old Daily Star strips, they're both a lot of fun in a little space. Ian Beadle makes an impressive Zarjaz debut on 'A Joe By Any Other Name', really nailing Dredd's moserabkle bastard look, whilst Uwe De Witt brings a wonderful comic touch to 'This Hears A Story' that suits the script well. 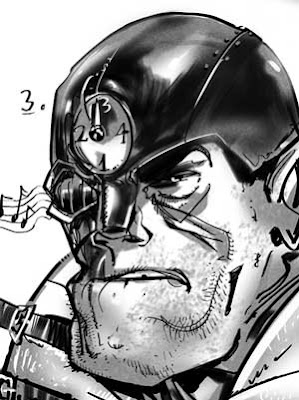 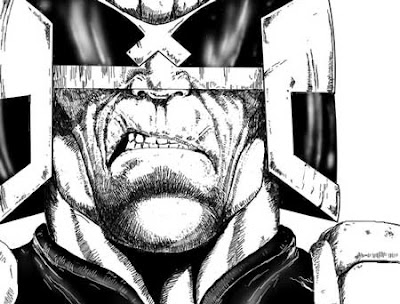 inally there's 'Judge Purger', a Mega City vigilante story from Mike Kalin and Dave Deloe. Whilst it's fun to read with really nice, clear art, the story is just 'Perp does something, Dredd nails perp', which is a bit disappointing. It's about as 'meh' as Zarjaz ever gets, - not a bad strip, but underwhelming especially in light of the rest. 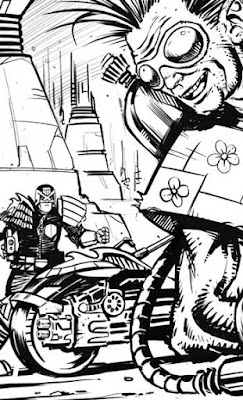 So there you have it - your guide to Zarjaz issue 36. For a few measly Galactic Groats (£3 plus post) there simply is no reason not to get this if you like 2000AD and want 'proper' stories like what we used to have. If you haven't read the last two issues and are worried about following the Giant strip, well you can easily buy those as well!  Go on... you know you want to.

Buy Zarjaz and others at: FUTUREQUAKE