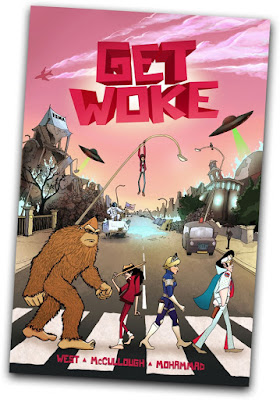 After starting my own project on Kickstarter I started looking at other people's and then actually backing a few because, well, I like comics! Oneof these is Tim West and Kevin McCullough's 'Get Woke', which I wanted simply because it looked like my kind of bonkers.

John Woke (and yes, there is a 'wake up, Woke!' joke in there) is an American teenager raised on conspiracy theories. Whilst on a school trip to Washington D.C he gets involved in a ritual sacrifice which results in him meeting the Earth defending team of Elvis Presley, Princess Diana, Michael Jackson, Bigfoot and JFK's brain. I swear I amnot making this up... 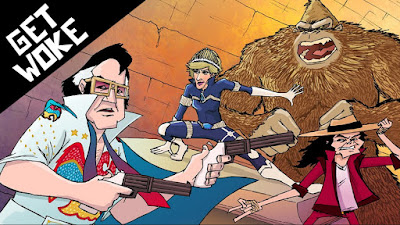 If the above, frankly insane summary above made you want to see what the fuck this is allabout then I urge you to give in to your desires, as 'Get Woke' is not only mad as a box of frogs it's very funny as well. Ably illustrated by McCullough and well colored by Dimas Mohammad, it jumps from the page at every opportunity. The star forme, however, is West, who delivers some sparkly dialogue that will annoy some of the more wimpy minded out there but I loved it. Such as:

'Satanic paedophiles answer to lead as well as Lucifer, but a cross will protect you from even the mnost rapey of demonoids.'

Princess Diana! 'She has boobies! Quick, misogynise her!'

And much, much more. I had a blast reading this one and can't wait for issue two, which has to come because of the cliffhanger ending to this one. 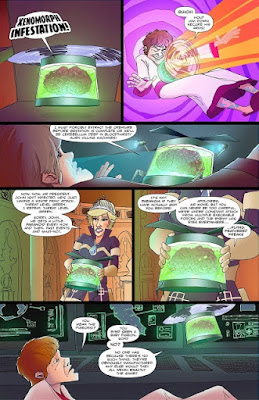